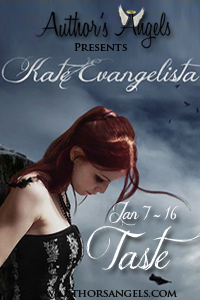 I am so excited to be a stop on the blog tour for Kate Evangelista's Taste! There's a lot going on here today with Kate's guest post, my review, and a giveaway. Don't forget to check out all the blogs that were stops on the tour! :) And without further ado, here's Kate...

When I first started writing Taste, I never thought of the love story as a love triangle. It had always been the story of Phoenix discovering by accident that something else went on at her school after hours.

But to be clear, I love writing love stories, so in anything I write there is always a romantic element. This has always been the case since I was in high school.

I love the concept of falling in love.

In Taste, Phoenix stumbles upon Demitri. Well, he saves her from having her flesh tasted by Eli. Their relationship is a tumultuous one because they needed to reconcile one fact: are they just
attracted to each other because of something that happens between them that binds them or is there something deeper beyond their connection? Was it just physical attraction?

I think this is why I like Luka for Phoenix better. He's a more stable choice for her. But, of course, I'm merely the typist of this story. Just because I like something doesn't mean it'll happen. *le sigh*

The love triangle was born several drafts into the story. Slowly, I started seeing that beyond Demitri's and Phoenix's connection, Luka was making an impact in her life and her journey.

I believe Luka and Phoenix have a shared experience. They are both living through issues with their fathers. That's what binds them. They find comfort in each other because of it. The
attraction between them comes from a deeper place than the physical.

I will be the first to admit that Phoenix isn't the type of make the best decisions in the world. She decides on things based on impulse and whatever situation her curiosity lands her in. And if
you've read Taste, you'll know what I mean. If you haven't, grab your copy now and see what I mean.

Love triangles are complicated situations. A character is pulled in different directions for wholly different reasons. Real life is just as complicated. Sometimes even more so.

What happens between Demitri, Luka, and Phoenix within Taste grew out of several drafts, each one different from the next. There have been several scenarios as to who she ends up with in the
end. My critique partners know this.

At the end of the day, regardless of who Phoenix picks, it's about the journey of how she got there. I may not a hundred percent agree, but it's her story, not mine. I merely want to share with
all of you what happened to Phoenix when she met the Zhamvy that fateful afternoon she broke curfew.

So, I end this guest post by thanking you for hanging out with me. Grab your copy of Taste today. Love it or hate it is up to you. My fondest wish is that you enjoy the ride.

Be rebellious. Take a chance. See what Taste has to offer.

I dare you to break curfew.

When Kate Evangelista was told she had a knack for writing stories, she did the next best thing: entered medical school. After realizing she wasn’t going to be the next Doogie Howser, M.D., Kate wandered into the Literature department of her university and never looked back. Today, she is in possession of a piece of paper that says to the world she owns a Literature degree. To make matters worse, she took Master’s courses in creative writing. In the end, she realized to be a writer, none of what she had mattered. What really mattered? Writing. Plain and simple, honest to God, sitting in front of her computer, writing. Today, she has four completed Young Adult novels.

Synopsis from GoodReads:
At Barinkoff Academy, there's only one rule: no students on campus after curfew. Phoenix McKay soon finds out why when she is left behind at sunset. A group calling themselves night students threaten to taste her flesh until she is saved by a mysterious, alluring boy. With his pale skin, dark eyes, and mesmerizing voice, Demitri is both irresistible and impenetrable. He warns her to stay away from his dangerous world of flesh eaters. Unfortunately, the gorgeous and playful Luka has other plans. When Phoenix is caught between her physical and her emotional attraction, she becomes the keeper of a deadly secret that will rock the foundations of an ancient civilization living beneath Barinkoff Academy. Phoenix doesn't realize until it is too late that the closer she gets to both Demitri and Luka the more she is plunging them all into a centuries old feud.

***************
First off, let me say that I don't think the synopsis does this book justice. Obviously, it was enough to entice me to read it but the book is sooo much more!

Phoenix, a girl who feels alone in the world following the death of her mother and the subsequent withdrawal of her father, needs a reason for being. One evening, she awakes in the library realizing she's broken the one rule of the Barinkoff Academy. In her attempt to escape the school grounds without getting caught, she unwittingly discovers that reason.

Demitri, a boy who was born into his destiny and who robotically moves through his life serving his people. He didn't realize something was missing from his life...until he met Phoenix.

Oh, and then there's Luka...gorgeous, snarky, intriguing Luka. *swoon* Luka is much different from Demitri. He's willing to give Phoenix the answers to all her questions about his race and what goes on at Barinkoff Academy after dark. He's also more than willing to explore his attraction to Phoenix. :) Luka is rather full of surprises, really. He's definitely hiding a lot behind his charming smile and rumpled uniform.

The Barinkoff Academy is keeping a secret...an entire civilization. These peoples' existence is in danger and that's where Phoenix comes in. Having been unable to do anything to save her mother, Phoenix is desperate to play a part in helping Demitri's people survive.

The future of Demitri and Luka's people is also threatened by political infighting. Here again, Phoenix plays a key role as she is used as a catalyst in a certain figure's quest for power.

There is also the connection that was forged between Demitri and Phoenix which is solidified once the plan to save Demitri's people is set into motion. *swoon*

This story has it all...action, romance, mystery...and I loved every minute of it!

Tour Prizes -   At the end of the tour, Kate will give away 5 digital copies and one print copy.  The winners will be selected using rafflecopter on January 17.


January 7
Guilty Pleasures
My Library in the Making

January 15
My Life Beyond Labels
Escape2Books
Dizneeee's World of Books