Earlier this year, I read and reviewed D.H. Nevins' Wormwood. If you missed my review, you can read it here. I really enjoyed Wormwood, so I asked Ms. Nevins if I could interview her. Thankfully, she agreed. Recently, Ms. Nevins had some exciting happenings around Wormwood. She had the talented cover artist, Derek Murphy, ask if she'd like to see some designs he'd been inspired to create after reading Wormwood. Now, Wormwood has a new cover (I liked the original cover but I have to say this new cover is much more representative of the story) and the sequel, Angel of Shadow, has a lovely cover as well. Ms. Nevins also had a musician from the band Orca Flights approach her with a song he'd written specifically for the book. It's called Leap of Faith. So along with my interview with D.H., I'm going to share Wormwood's new cover and Leap of Faith for your enjoyment. :) And because I think this is a fantastic read, I'm also going a giveaway. Enjoy! 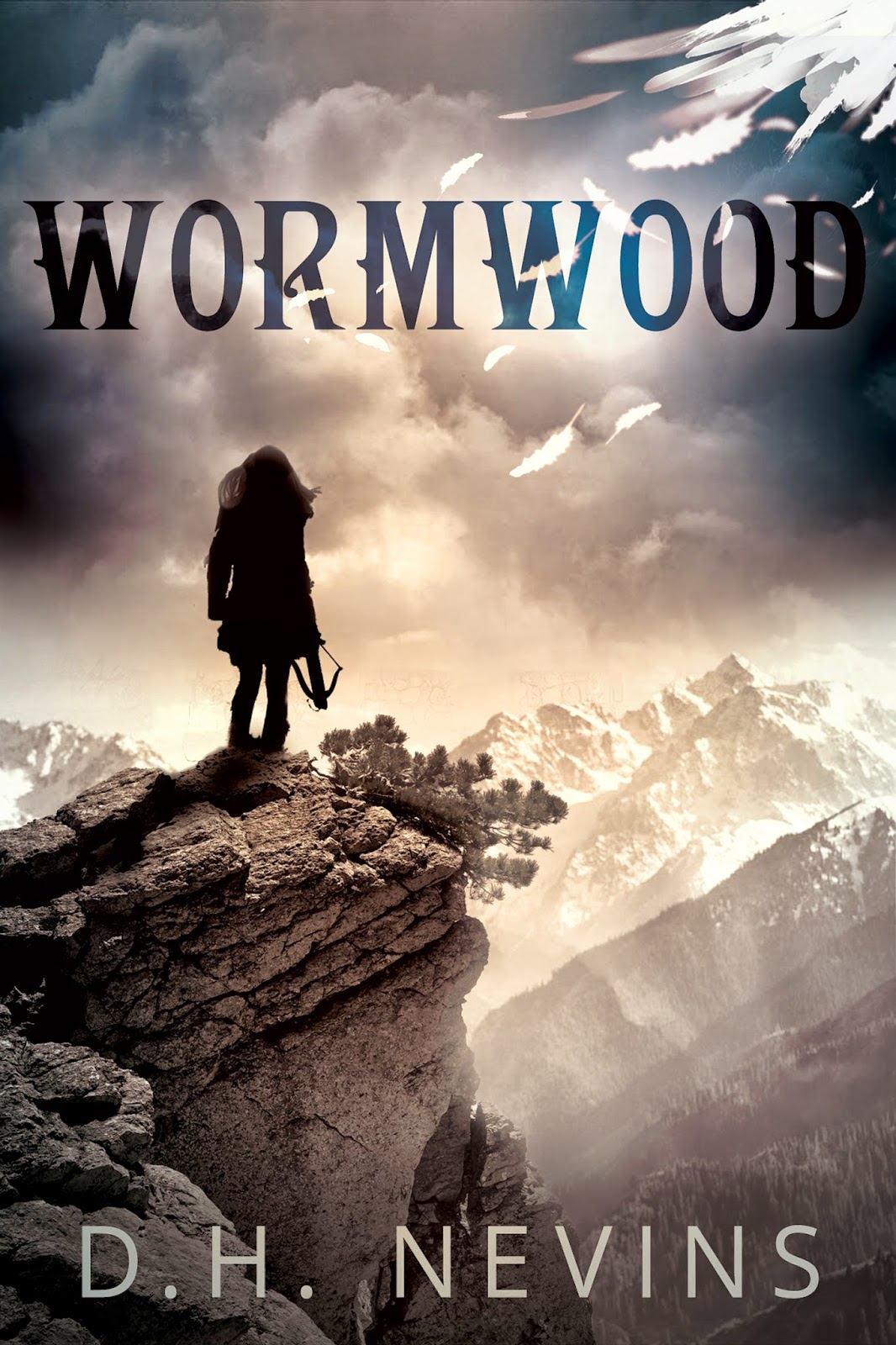 Synopsis
Against a devastated, post-apocalyptic landscape, a legion of one hundred fierce half-angels is hell bent on purging the Earth of all humans. But one of them, the tormented Tiamat, struggles against his mission, and when he rescues a beautiful woman named Kali, he finds the attraction as troubling as it is dangerous. Can Kali trust the one creature who could be responsible for her ultimate demise?

You can hop over to D.H.'s blog to read an interview between her and Noah Coty, of Orca Flights.

I grew up in the Toronto area, but roughly 10 years ago, resigned myself to the fact that I wasn’t a city person. So my husband and I moved into a log house in the woods—which is pretty much in the
middle of nowhere. We love it! We don’t have kids, but instead share our house with two cats. Now I don’t know where they got this idea, but they both act like they own the place.

What do you do when you are not writing?

I’m a teacher at a small, rural elementary school. The work keeps me very busy, but it’s gratifying. When I have some extra time—and I’m not writing—I tend to gravitate towards activities that get my
blood pumping: mainly hiking, canoeing, scuba diving and riding around on my motorcycle (which I’ve named Grendel). I’ve also tried white water rafting, hang gliding, sky diving, winter camping
(which was WAY too cold!) and zip lining. But that one thing that tugs at my soul more than anything else is travel, and true to that, my husband and I have dragged our backpacks around the world
twice.

Is there any particular author or book that influenced you in any way either growing up or as an adult?

Diana Gabaldon, Jean Auel and Stephen King have all influenced me. The first two authors I mentioned have what I consider to be some of the best voices in writing, and they have both created very strong female protagonists in their books. As for Stephen King, I have always been in awe of the multi-faceted worlds and characters he’s created.

On to questions about Wormwood...

I loved Wormwood. Why do you think it resonates with readers?

First of all, thank you! I’m incredibly flattered by your question. However, I must admit it’s difficult to answer. Naturally, any writer would hope their book would resonate with readers. It helps that most of us write books we’d want to read ourselves and then hope that our readers have the same tastes we do. Perhaps in this case, I luckily enjoy the same sorts of stories as many other readers.

When I read, I need strong, visual imagery and characters who are not only believable, but likeable enough that I’m happy to throw myself into their world and experience it through their eyes. On top of that, I’m an action junkie, a romantic, a fan of conflict in writing and absolutely need to be surprised by plot twists. With all these elements in mind, I knew I had some work ahead of me if I was to pull this off. So knowing what I needed to do, I spent a year mapping out the story and scribbling extensive notes on the characters before I wrote a single word of Wormwood. Is this why it
resonates with readers? I honestly don’t know. In the end, all I can say for certain is I wrote a story I would love to read myself.

Did you always intend this story to continue?

No. In fact, in an early incarnation of the plot, I killed off the main character, Kali. But realizing that ending was a little too dark, I changed it. Within this change, I left it open for a possible sequel and by doing so, fell in love with some of the possibilities! Before Wormwood was finished, I had already plotted out my ideas for a trilogy.

Why did you choose this particular mythology and was it challenging weaving a story around it?

There are already innumerable apocalyptic scenarios that include viruses, natural disasters, aliens, nuclear war, rebelling technology and even zombies, and I knew if I wanted to write something fresh, I’d have to go a different route. When I started looking into religious mythologies, I was fascinated. There are detailed apocalyptic scenarios within literature from a wide range of religions, from Modern Christian to Hindu to Ancient Babylonian. I took various elements from many different religions, including some of the names of my characters—names which I wrote to have significant meaning within the story. Fortunately, it was time consuming but not particularly challenging. If anything, it enthralled me.

I liked that you made the Nephilim fallible. Why did you decide to do that?

Thanks! I got the idea from my husband, actually, and built the entire story around this first seed of discussion. Very early on, when I established that I wanted to base the apocalypse on a weaving of
religious mythologies, my husband said, “Wouldn’t it be cool if this angel had to do it—had to destroy the Earth—but he was incredibly conflicted and tormented about it?” Naturally, my answer was a resounding, “Yes!” So from that, I built the character, Tiamat. The other Nephilim were written to have very human emotions and weaknesses as well. It made them far more real for me.

Is Tiamat's grief over what he has to do part of that fallibility?

Absolutely. It is also his strength.

I love that Kali is such a strong heroine. Was it important to you that she be that way?

I don’t think I could have written her any other way. I would have been bored composing a story about a character who was weak-willed, selfish or whiney, and probably wouldn’t have finished
writing the book! No, she needed to be strong in order to drive both the story and the author!