Happy Release Day to Stephanie Parent!
I'm thrilled to be a part of the Book Blitz for Forty Days. This book looks to be amazing! It's premise is definitely unique. I can't wait to get my hands on it. I've been jonesing for some historical fiction! This Book Blitz was organized by Xpresso Book Tours.

Forty Days by Stephanie Parent
Series: Neima's Ark #1
Publication date: February 12th 2013
The entire village knows Neima’s grandfather is a madman. For years the old man has prophesied that a great flood is coming, a flood disastrous enough to blot out the entire earth. He’s even built an enormous ark that he claims will allow his family to survive the deluge. But no one believes the ravings of a lunatic…

…until the rain starts. And doesn’t stop. Soon sixteen-year-old Neima finds her entire world transformed, her life and those of the people she loves in peril. Trapped on the ark with her grandfather Noah, the rest of her family, and a noisy, filthy, and hungry assortment of wild animals, will Neima find a way to survive?

With lions, tigers, and bears oh my, elephants and flamingos too, along with rivalries and betrayals, a mysterious stowaway, and perhaps even an unexpected romance, FORTY DAYS is not your grandfather’s Noah’s Ark story.

FORTY DAYS is approximately 45000 words, the length of a shorter novel, and is the first installment in a two-part epic story. It does contain a cliffhanger ending.

Readers looking for a traditional, religiously oriented version of the Noah’s Ark story should be warned that FORTY DAYS may not appeal to them. The novel will, however, appeal to lovers of apocalyptic fiction, historical fiction, and romance, as well as anyone who’s ever dreamed of having a baby elephant as a pet.

A bit farther off, two strange, solid-looking animals are tethered to a small juniper tree by a length of rope, though it looks like between the two of them, they could pull the tree out by its roots if they were determined enough. As I move nearer, I see that their gray skin is wrinkled and tough-looking, almost like leather, with reddish hair scattered across their heads and backs. They have wide, floppy ears and, oddest of all, each has a long, tubular protrusion where its nose or snout should be. I think these creatures are elephants, the source of the huge tusks traders occasionally bring to our village. But only one of the two has anything remotely like those tusks, and they’re short, barely peeking out from either side of its long snout. Despite the animal’s size and the weathered look of its skin, it somehow reminds me of a baby smiling, displaying its first two teeth.
“They’re so big!” I say when I’m close enough to realize the larger of the two—the one with the tusks—is nearly as tall as I am, and its four legs appear solid as tree trunks beneath its ample bulk.
The trader beside me begins to laugh, a deep, solid rumble that lasts long enough to concern me.
“What? What is it?” I ask, inching away from the strange beasts.
“It’s just”—he places a hand to his chest, as though he can push the laughter down—“if you think they’re large, I’d love to see your face if you ever catch sight of their mother.”
I still don’t understand.
“These are three years old at the most,” he says, “and still immature. A full-grown elephant looms above any man, and it weighs, I’d say, three or four times as much as these young ones here. The elephant is to other animals as…as this great ark behind us is to the cottages in your village.”
I try to picture such an animal, and a shiver skitters up my arms despite the heat. It sounds as if a full-grown elephant could crush me beneath just one foot. I’m ready to back away even from these smaller specimens, but the trader places a hand on my arm.
“They are gentle giants,” he says. His voice is calmer now, all the laughter expelled. “Plant eaters, peaceful and intelligent.” He releases my arm but beckons me forward, and, though I’m still a bit wary, I follow. “And friendly—look how they’re greeting you.”
Both animals are waving their long snouts in an almost comical manner, reaching them up and down, twisting and curling them, stretching toward—me?
“They’re trying to scent you,” the trader says. “Here—” He reaches for the nearest snout. “Take hold of the trunk and blow into it, like this.”
Trunk? I decide I prefer the term to snout as I follow his lead. The elephant’s skin is as tough as I imagined, but not unpleasant.
“There,” he says. “Now you’ve greeted her, and she’ll remember your scent. Best not leave her brother out.”
“Are they really brother and sister?” I ask as I take the trunk of the small-tusked elephant and blow gently into it.
He shrugs. “They may as well be, now.” The elephant opens his mouth in a kind of smile and waves his trunk before my face witheven greater enthusiasm, brushing against my forehead and nose. The female butts her head against the trader, demanding equal attention, until he pats her trunk. They really are as friendly as he said, and, in their own strange way, lovely. I hate to think of them separated from their parents, whether they’re truly siblings or not. 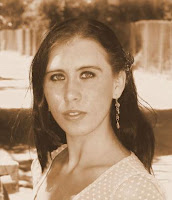 Stephanie Parent is a graduate of the Master of Professional Writing program at USC and attended the Baltimore School for the Arts as a piano major. She moved to Los Angeles because of Francesca Lia Block's WEETZIE BAT books, which might give you some idea of how much books mean to her. She also loves dogs, books about dogs, and sugary coffee drinks both hot and cold.

Stephanie is graciously offering an ebook of Forty Days. This giveaway is open to US/CAN/INT.
a Rafflecopter giveaway


Stephanie is also offering a $20 gift card. You can enter this giveaway on her website.
Posted by Bookworm Brandee at 6:23 AM