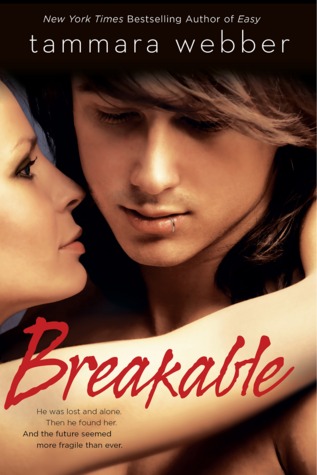 Synopsis
He was lost and alone. Then he found her.
And the future seemed more fragile than ever.

As a child, Landon Lucas Maxfield believed his life was perfect and looked forward to a future filled with promise - until tragedy tore his family apart and made him doubt everything he ever believed.

All he wanted was to leave the past behind. When he met Jacqueline Wallace, his desire to be everything she needed came so easy...

As easy as it could be for a man who learned that the soul is breakable and that everything you hoped for could be ripped away in a heartbeat.

**This book was recommended by EVERYONE! (see above)**

I admit to being a little hesitant about Breakable, wondering how much more I could get out of the story being told from Landon/Lucas' POV. But it was so much more than simply a retelling of Easy. Webber gave me it all - everything Lucas endured, all he felt. And I fell for him even harder.

Although Breakable does give us more from Lucas' side of the story on how things went down with Jacqueline, it primarily related more about all that he experienced growing up - especially after the tragedy he suffered at 13. Witnessing all that through his eyes, how he internalized what happened, his dad's reaction to it, the way in which he (Lucas) coped, and, finally, what turned his life around broke my heart. But it also eventually put it back together.

I felt for Landon/Lucas. He didn't have many people on his side. And he continued to suffer devastating losses and/or blows. It was incredible the man he grew up to be and it was beautiful to watch him finally open up to Jacqueline. That took great strength and courage.

Breakable was deeply emotional and moving. And it was absolutely worth the read!