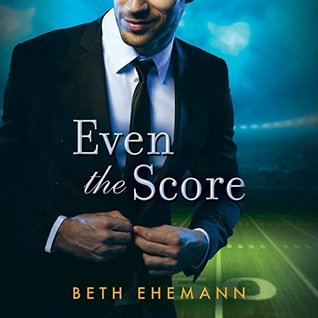 Synopsis
Single dad Andy Shaw loves his job as a sports agent, with one exception: it doesn't leave him much time for his kids. No parent likes being sidelined, so Andy decides to hire someone to share the workload. But when one of the hottest agents in the industry applies, Andy knows that this deal is definitely trouble.

Danicka Douglas works her butt off, but being an attractive woman in a testosterone-heavy industry isn't exactly a cakewalk. She guards her professional reputation fiercely, which means no crushing on her gorgeous boss. But the more they ignore that sexy little spark, the more it sizzles...

Just when it looks like romance might be in the plan, Dani is threatened by a stalker with dark intentions. To keep her safe, Andy must cross the line between professional and very personal...because this time, he's playing for keeps.

Even the Score was my first Beth Ehemann read and I'm eager to read her backlist now so I can get the stories behind a few of the characters I met here. Andy and Danicka's story was one I enjoyed even though I wished a few things had been handled differently.


What Could Have Worked Better:

Overall, I liked Even the Score and I'll be adding more of Ehemann's books to my library.