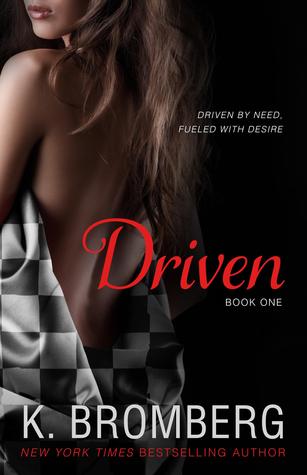 Synopsis
Rylee Thomas is used to being in control. But she's about to meet the one man that just might make her enjoy losing it...

I am the exception to the rule.

In a world full of willing women, I'm a challenge to the roguish and achingly handsome Colton Donavan. A man used to getting exactly what he wants in all aspects of life. He's the reckless bad boy constantly skating that razor thin edge toward out of control, on and off of the track.

Colton crashes into my life like a tornado: sapping my control, testing my vulnerabilities beyond their limits, and unintentionally penetrating the protective wall around my healing heart. Tearing apart the world I rebuilt so carefully with structure, predictability, and discipline.

I can't give him what he wants and he can't give me what I need. But after a glimpse beneath his refined exterior into the dark secrets of his damaged soul, can I bring myself to walk away?

Our sexual chemistry is undeniable. Our individual need for complete control is irrefutable. But when our worlds collide, is the chemistry enough to bring us together or will our untold secrets and battle of wills force us apart?

Me: Yay! Another Book Bonanza buddy read under our belts!

While Driven was a bit angsty for me at times, I'm completely invested in Rylee and Colton, as individuals and as a couple.

1. Rylee and Colton's initial meeting was comedic despite the circumstances that created it. They both felt such an immediate connection. How do you feel about the way Bromberg handled that connection throughout the book?

Denise: Bromberg kept the connection hot and lusty. I felt that the first meeting with its fiery lust was going to be the highlight of the connection but I was completely wrong. They have a connection that they cannot fight even as they both try.

It was definitely a case of insta-lust but I liked that Rylee fought the attraction and Colton despite his fierce determination. I agreed with Rylee in that part of Colton's attraction to her was that she said "no" but clearly it was more and became so much more.

2) How do you feel about the reasons behind both Rylee's and Colton's attempts to keep distance between them?

Both characters have some very dep emotional reasons for wanting distance. Although they are very different, they both run very deep and have closed themselves off. It was very difficult to hear Rylee's story but the bits and pieces of Colton's that we have seen are very disturbing and we still don't know the whole story. So while Rylee's reasons are very sad, Colton's just piss me off.

Rylee's reasons - which we become intimately aware of - broke my heart. And she hasn't shared everything yet - at least with Colton. To experience all she did and then to be treated the way she was by people she trusted (at least I assume she trusted) was awful. She's certainly scarred physically and emotionally, and rightfully so.
Colton's reasons we're only guessing at and I'm getting an idea they aren't pretty. They must be beyond terrible if the life he was eventually gifted wasn't able to help him heal at all.

3) What do you think about Rylee's profession and how it relates to Colton's issues?

I believe the work she does helps her relate to Colton but as in many situations it is hard to see things in your personal life even if it is part of your work life. Rylee is very giving and definitely not selfish in any way but still has difficulty dealing with some situations due to it affecting her heart and not her job.

I love that she's working to help a population that is probably largely ignored. I think it helps her deal and heal from some of what she's gone through. And it puts her at an advantage in knowing how to approach Colton at times. I find it ironic that Colton believes he's so irrevocably damanged and yet you can "feel" his hope that Rylee will be the one to heal him.

4) And that brings me to wondering how you felt about the push and pull between these two and the angst is caused.

As you read the story it is obvious that they care for each other but they can never be on the same page at the same time. The push and pull makes for a great story but at times I just wanted to tell them to get their act together and get on the same page.

I did feel it was mighty angsty at times and while I don't mind angst, there were times I wanted to shake them both and yell "Make up your mind!" Honestly, that was the only downside to the story so far.

Overall, I liked the story, the plot, and the character development. I'm impressed with Bromberg considering this was her debut. And I'm anxious to start Fueled - which I know you've already finished. I'm eager to get the story behind all of Colton's demons and to see him healed...because I know he's capable of being "fixed."

It is a great story. I love the chemistry. Broberg really knows how to write a cliffhanger which makes you buy the next book at 11 p.m.!!!!


In the end, both Denise and I gave Driven 4 Bookworms and I know we'll be continuing the series...Denise is already one ahead of me!