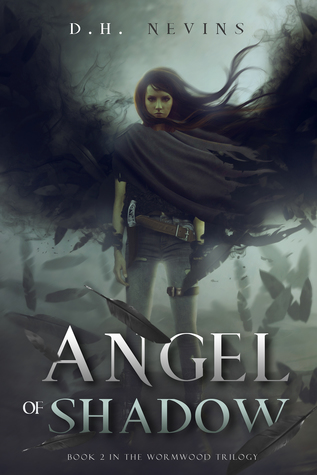 Angel of Shadow by D.H. Nevins
Wormwood #2
Release Date: January 13, 2018
Genre: Adult, Dystopian, Romance
Source: I received an eARC from the author. This did not affect my rating and my review is provided voluntarily.
Rating: 4.5 Bookworms
Challenges: #2018NewRelease
Goodreads

Synopsis
D.H. Nevins hurtles you into a world of half-angels, demons and tormented love in this driving, dystopian sequel to Wormwood.

Half-angels, known as Nephilim, have all but destroyed the surface of the Earth. Yet for Kali Michaels, her life is now much more complicated than simply surviving. Grappling with her own powerful identity, she worries her connection to the world of Shadows could destroy those around her.
And what if she hurts Tiamat Wormwood, the Nephilim outcast who has given everything to save her?
Tiamat and Kali know hey have no future - not when outside forces and Kali's own power push both the humans and the Nephilim to the brink of extinction.
As she fights to stop the inevitable, she is led to question who her real enemies are, and whether the ultimate threat may actually be herself.

To say I'd been anxiously awaiting the release of Angel of Shadow is an understatement. Wormwood made much an impression I couldn't wait to see what Kali and Tiamat did next. But wait I did. And fortunately, Angel of Shadow was worth the wait!

And all this was delivered in Nevins' beautiful prose.

The future is uncertain for Kali, Tiamat, and their friends. Whatever comes, they'll face it together. I'm eager to see where things go from here.