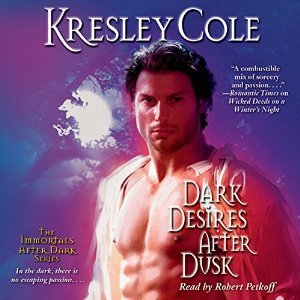 Synopsis
A seductive beauty he can never have. Yet can't resist...
Cadeon Woede will stop at nothing to atone for the one wrong that will haunt him forever. But once he secures the key to his redemption, the halfling Holly Ashwin, Cade finds that the woman he thought he could use for his own ends and then forget haunts him as much as his past.

A tormented warrior she should fear, but can't deny...
Raised as a human, Holly never knew that some frightening legends are real until she encounters a brutal demon who inexplicably guards her like a treasure. Thrust into a sensual new world of myth and power, with him as her protector, she begins to crave the demon's wicked touch.

Surrender to dark desires...
Yet just when he earns Holly's trust, will Cade be forced to betray the only woman who can sate his wildest needs--and claim his heart?

It's been a little while since I spent time in the Immortals After Dark world. I've missed it! Dark Desires After Dusk revolves around Cadeon and Holly and the dangers they face while dealing with Holly's rold in a prophecy about the Accession and her being Cadeon's Fated.


Dark Desires After Dusk was a more than satisfying installment in the series and I'm eager for the next one!