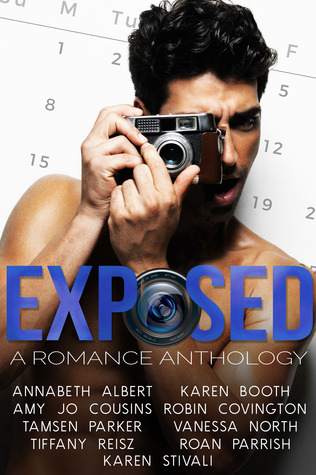 Synopsis
Hot. Naked. Guys. Reading.
When the sexiest Top 30 Under 30 men agree to post naked for the "Expose Yourself To A Good Book" charity calendar, their hot bodies aren't the only thing that gets EXPOSED. Nine brand new romances with M/F, M/M, F/F and menage pairings from bestselling and award winning authors, there's something for everyone in this limited release anthology.

Annabeth Albert
LEVEL UP
When Landon, a genius physicist, is picked for a charity calendar, he must deal with an inconvenient attraction to Bailey, his rising-star photographer. Can he slay enough demons from his past to ensure a future together with him?

Karen Booth
WISHING
Jobless and painfully single, Samantha agrees to drive musician Duncan to a photo shoot. He's in town for only five days, so sexy, and she's eager for a no-strings fling. But Duncan shoots straight for the heart, making her unsure how she'll ever survive his goodbye.

Amy Jo Cousins
KATE LIKES GIRLS
Garden center manager Kate Rhee is on a mission. No more hook ups with women or second-guessing her recent break up with an unavailable man. Too bad the foxy, pink-haired bar owner she meets at a naked calendar photo shoot has sworn off girlfriends. Because Kate isn't doing casual. She can totally resist that temptation. Totally.

Robin Covington
GHOST
Oliver Burns publicly bragged he'd sign the reclusive artist "G" - creator of the First Nations graphic novel, Ghost Warriors - to his comic publishing company. But that gets tough when "G" is Gareth Rain - the man he pulled a post-one-night-stand runner on years ago and the man has never forgotten.

Vanessa North
RIGGED
For Kaitlyn, seeing her best friend Gordon naked is no big deal - until watching Sean tie him up changes everything.

Tamsen Parker
THROWN OFF TRACK
Teague has been License to Game's bassist for over a decade, during which time he's slept with almost everyone in his path. But it's always felt like going through the motions. Until he sees his bandmate Christian naked at a charity photoshoot and suddenly, he knows what it is to want.

Tiffany Reisz
THE WATERMARK
Jason "Still" Waters' life looks perfect from the outside - money, fame, and the words "World Champion Bull-Rider" after his name. But Jason has a secret, one he never planned on telling anybody...until he meets Simone. She's the kinky girl of his dreams...and his conservative family's worst nightmare.

Karen Stivali
LEGAL BRIEFS
When organizing a naked charity calendar puts Rose's tenure bid in jeopardy, the last person she wants help from is Michael, the gorgeous, arrogant lawyer she butted heads with during his shoot. He'll defend her for free, but if their secrets come out they could both pay with their hearts.

A few things...
1) This anthology is ONLY 99 CENTS during release week. Go one-click it NOW! You're welcome. :)
2) My review today is only for Karen Booth's Wishing. I did purchase the anthology though, so I'll be reviewing more of it as I get the stories read.
3) There is controversy swirling around this anthology since Santino Hassell was originally set to be included. However, in light of the situation, the other authors involved decided to remove Hassell from the lineup. You can go here to see the statement released by the authors.


Wishing is a story set in the world of KBooth's Bring Me Back series. You do not have to have read Bring Me Back to enjoy Wishing but I think having that backstory made Sam's story all the sweeter! This anthology sets out to prove that love is love no matter what and KBooth did that with a romance that blossoms in only a couple of days. Love doesn't follow a set of rules though. It doesn't always make sense. It's just...love.

Sam has come home after losing her job and her boyfriend. She's feeling disillusioned with life and is a little disappointed when she arrives home only to find her mom and step-dad have another house guest. Luckily the house guest is a hot guy - a musician no less. And she gets to chauffeur him to a photo shoot...where he's posing naked.

Duncan is in town not only for the photo shoot but also to put the finishing touches on his solo album. He's experienced tragedy fairly recently and hasn't had much to feel happy about. However, he admires and feels close to Chris Penman, Sam's step-dad who's producing the album, and he's almost tongue-tied at meeting Sam.

Although Wishing is a novella, KBooth did a great job with character growth and I delighted in seeing how both Sam and Duncan experienced personal discovery while also falling in love. They were mature in how they handled their feelings and worked at giving each other space - room to grow - as well as building a strong foundation for their relationship. They may have fallen quickly but they took things slowly.

Would I like more? Absolutely! But I'm quite satisfied with Sam and Duncan's story. Love follows its own path and when you know, you just know...it's love!