Hey y'all! The Tempering, by Adrianne James, is a book I'm really excited about it. It's New Adult AND it's paranormal. I have all the pertinent information on the book for y'all, an excerpt, and an interesting guest post from Ms. James.

Also, I'm thrilled to be able to offer one lucky commenter an ecopy of The Tempering. This giveaway is open internationally and ends on October 26th. To enter, simply leave a comment about why you'd like to read The Tempering. 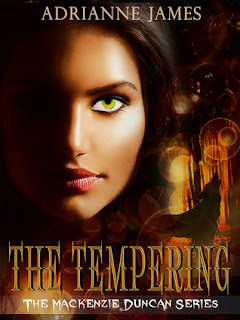 Synopsis:
The Mythology department at prestigious Harvard University is tiny—and Mackenzie Duncan has just been selected as one of the lucky few. Her love for myths and legends is deep, but she never thought any of it could be real.

After being attacked by a large wolf while walking home alone, Mackenzie realizes something is not right. She heals quickly, has suddenly become super strong, and is experiencing mood swings that can’t possibly be normal. The myths she’s studying aren’t myths at all. Werewolves are real, and she’s one of them. Fear of what she is, and who she might hurt sends Mackenzie running from the life she’s worked hard to build–and straight into the arms of a handsome Were named Geoff and into the home of his pack. Living with her new pack takes the edge off her confusion and self-loathing, but the arrival of new pack members changes the dynamic, and tests Geoff and Mackenzie’s growing relationship.

The hardest part of being a werewolf is to have no control and no memory of her time as a bloodthirsty beast. When a moon cycle passes, and she is actually able to remember bits and pieces of the night, she starts to ask questions, and the more questions she asks, the more she realizes she doesn’t like the answers. Can she set aside her own sense of morals to belong to a pack that is like a family or will she leave everything behind yet again in search of a life she can be proud of?

“Is this normal?” Mackenzie asked in a whisper not wanting to wake Liam. She figured sleeping was probably the only way to keep the pain away.

“Yes. Every bitten Were goes through this. You did, but the body shuts the mind off for a reason. His bones are breaking and healing. Cartilage is shifting or growing. Muscles are stretching. It’s a whole process that the body goes through. The only thing to do now is wait.”

“Okay. I’ll be right back.” Waiting might be part of the process, but maybe she could make him more comfortable. He may not recognize what she was doing, but she did.

Grabbing a bucket of cool water, a washcloth, and some blankets, she went back to the den. Margret and Geoff stood off to the side, whispering with one another so low that even with her super hearing, she couldn’t tell what they were saying.

“I am so sorry, Liam. You can’t hear me, but I won’t leave you. We can figure this whole thing out together. You are not alone.” Her voice was soft and she knew the others could hear her, but she didn’t care.

Dipping the cloth into the cool water then ringing it out, she placed it on his forehead.

“Mack? Come on. Let’s leave Margret to deal with this. You need to rest.” Geoff stood so close she could feel his breath on her neck. As much as she wanted to turn around to see how close he was and to go wherever he asked her to, asshole or not, she couldn’t leave Liam. He was her responsibility. She would be his sire. He needed her.

“I can’t leave him. Not yet.” Tears slipped from her eyes but for the first time in ages, she didn’t wipe them away or force herself to stop. Someone needed to grieve for his lost life even if no one knew it was gone yet.


***Guest Post***
Why I chose to write Werewolves over Vampires

I get this question a lot. The answer is simple. I fell in love with a story line that was werewolf centric. I have nothing against vampires, I love them actually. But for the story that was begging to be written, vampires would never have worked.

The Tempering (and the rest of the series) is a story about a girl trying to figure out her new life, when her life was just really getting started. It’s about learning who to trust and who not to. It’s about choices and how to deal with life when you have no choices. It’s about how complicated feelings and attraction can be. It’s about life and guilt over things you have no control over. For this story, Vampires just Werewolves get to walk that thin line between human and paranormal and The Tempering shows Mackenzie trying to stay as far on the human side as possible…until she is shoved over and forced to deal with her paranormal side.

I might write a vampire story one day, but for now, Werewolves are it for me. Hot hunky werewolves. Yes, those will do JUST fine ;)

Growing up, Adrianne couldn't get her hands on enough books to satisfy her need for the make believe. If she finished a novel and didn't have a new one ready and waiting for her, she began to create her own tales of magic and wonder. Now, as an adult, books still make up majority of her free time, and now her tales get written down to be shared with the world.

During the day, Adrianne uses her camera to capture life's stories for clients of all ages and at night, after her two children are tucked in bed; she devotes herself to her written work. Adrianne is living the life she always wanted, surrounded by art and beauty, the written word and a loving family.

As a young adult and new adult author, Adrianne James has plans to bring stories of growing characters, a little romance, and perhaps a little magic and mythology down the line for her readers to enjoy.