**Release Day Blitz & Giveaway ~ Caught Up in You ~ Sophie Swift**

I have the synopsis, an excerpt, and a giveaway for y'all.


Giveaway
One lucky commenter will win an ecopy of Caught Up in You. This giveaway is open internationally and ends October 22. The winner will be chosen randomly. 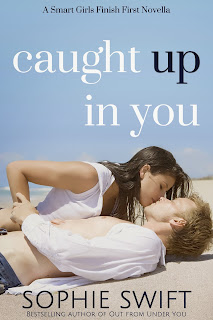 Blake Thomas knows exactly why women want to sleep with him. He’s a sexy, twenty-six-year-old bartender with nothing to lose and confidence to spare.

Then Blake meets twenty-two-year-old Lia Smart, the owner of the restaurant where he’s just been hired. Lia is different from Blake’s usual conquests. She’s beautiful, shy, and guarded, with just a hint of loneliness in her eyes. The only problem is, Lia refuses to see Blake as anything more than just a flirtatious bartender.

But everything changes when Lia’s sexy and assertive older sister, Alex, comes back into town. Alex and Lia have always had a complicated relationship, made even more complicated by the fact that they are clearly in love with the same man. Before long, Blake finds himself the pawn in a high stakes game of forbidden love and dangerous emotions, caught between two sisters who could both easily break his heart.

CAUGHT UP IN YOU is a companion novella to be enjoyed before or after reading OUT FROM UNDER YOU, or as a stand-alone story.

“So,” she said, breaking me out of my reverie. “What is your deal?”

She nodded. “Your deal.”

I couldn’t be sure but I swore I heard her voice slur slightly on the last word. My hopes instantly rose. Tipsy Lia would be a lot more willing to take clothes off than sober Lia. That I could be sure of.

“How many times are we going to say the word deal? Should we turn it into a drinking game? Make things interesting?” I flagged down the waitress and ordered a Jack and Coke. Lia asked for the same.

“Do you always drink Jack and Coke?” I asked.

I laughed. “Are you trying to be mysterious?”

She stayed silent and we stared each other down like two kids having a contest.

“For me to kiss you?” I asked presumptuously, making her giggle. “Because that’s a little difficult with you all the way on the other side of the table. But I’ll give it a shot if you want.”

I cleared away the empty shot glasses between us, like I was going to sprawl myself right across this table.

“For you to tell me your deal,” she corrected.

I pounded the table with my fist. “Damn. We don’t have our drinks yet. That’s one extra sip for you.”

When she didn’t respond, I added, “Why don’t you tell me what you think my deal is.”

I feigned surprise. “You do?”

The waitress delivered our drinks and I took a sip of mine, prompting Lia to take an obligatory swallow of her own. She did.

“You’re a bartender,” she began.

I pursed my lips in mock appreciation. “Oooh, perceptive. I like that in a woman.”

She ignored my jab and continued. “You do it because you like the attention.”

“What attention?” I asked. “You ignore me all night.”

“From other women. I see the way they look at you. You could have any girl in this room.”

I leaned forward, holding her gaze. “But I’m here with you.”

Sophie Swift is an east coast girl who recently transplanted to Southern California. She writes about sexy boys by day, and dates them by night. Her sizzling, new adult romance, OUT FROM UNDER YOU, the first in a new contemporary series, will be released in August of 2013. She loves books that quicken her pace, music sung by adolescent boys, and cupcakes with too much frosting.