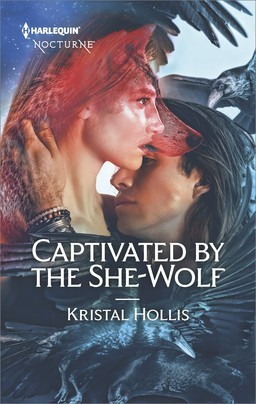 Captivated by the She-Wolf by Kristal Hollis
Wahyas of Walker's Run #4
Release Date: February 1, 2018
Genre: Adult, Paranormal Romance
Source: I received an ARC from the author. This did not affect my rating and I voluntarily provided a review.
Rating: 4.5 Bookworms
Challenges: #2018NewRelease, #COYER
Goodreads

Ronni Lyles and her son are just settling into their new pack when her dead husband's brother comes to claim then. Bodie Gryffon is looking for a safe place to raise his daughter - a raven-shifter, just like him. What begins as a purely practical alliance turns passionate. But Ronni senses that Bodie has a secret - one that could force him to make a painful choice.

The mythology KHollis has created surrounding her Wahyas has kept me enthralled with this series. In Captivated by the She-Wolf, she incorporates a Native American myth and the result was, well, captivating. Here are the highlights:

In the end, I was so enchanted with the blending of the Native American myth into that of the Wahyan that I didn't mind one bit that this story wasn't only about wolves. And I'm looking forward to seeing how Bodie and Ronnie's blended family impacts Wahyan life and beliefs.