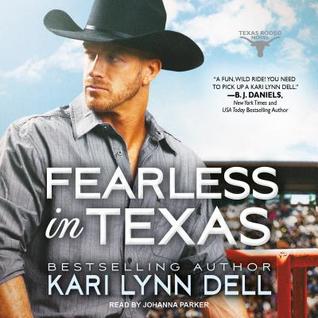 Fearless in Texas by Kari Lynn Dell
Texas Rodeo #4
Narrated by: Johanna Parker
Release Date: April 3, 2018
Genre: Adult, Contemporary Romance
Source: I received a complimentary copy from Tantor Audio and I also received an eARC from the publisher via Netgalley. This did not affect my rating and my review is voluntarily provided.
Rating: 4.5 Bookworms
Challenges: #2018NewRelease, #AudioChallenge
Goodreads

Synopsis
After her life comes crashing down, Melanie Brookman is determined to claw her way back up again - and this time, she won't make the same mistakes twice. So when her friend sends Wyatt Darrington to help, Melanie keeps him at arm's length. He's exactly the sort of trouble she doesn't need. Wyatt has the perfect distraction for Melanie: rescue his failing bar. She reluctantly agrees and together they hit the road. As they spend more time with one another, undeniable attraction grows. But Wyatt knows that if she ever found out his closely guarded secret, any chance at happily ever after would be left in the dust...

In my review of Tougher in Texas, I said this about waiting for Fearless in Texas:


"...since the stories keep getting more entertaining, I *know* it'll be worth the wait."

And guess what? Dell DID NOT DISAPPOINT! Seriously, this series just gets better and better! I think I'm suffering from a book hangover. Dell delivered another compelling story with characters that are brilliantly brought to life. I'm chomping at the bit for the next installment!

I suppose Fearless in Texas had a little different tone since the rodeo wasn't front and center but it was every bit as riveting as its predecessors. Dell wove together a cast of characters I couldn't help by love with a story that kept me captivated. I can't thank Anna enough for turning me on to Dell!

Parker continues impressing me with her ability to keep the pace just right and deliver on all the emotions. And for the most part, she keeps her voices distinct. She's become a favorite narrator of mine, honestly. And I'm once again anxious for the next book in the series!