Welcome to the first of my two stops on the blog tour for Defiant Heart by Marty Steere. My stop today includes all the details you need to know about Defiant Heart as well as my review. Be sure to stop by tomorrow for a guest post from Marty regarding his research in writing a novel about World War II.

This blog tour is presented by Virtual Author Book Tours. 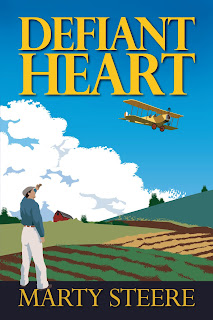 Synopsis:
Two extraordinary characters. One unforgettable love story. In the spring of 1941, young Jon Meyer’s family dies in a tragic accident, and he is sent to live in a small Indiana town. He arrives to find himself unwanted and shunned. Mary Dahlgren is the mayor’s daughter. A pretty girl, she could have the pick of the boys in town, including Vernon King, the star of the vaunted high school basketball team. To the chagrin of her friends, though, Mary has always been more interested in books than boys. That is, until she meets Jon. But Jon and Mary are kept apart through the efforts of Mary’s father, who perceives their relationship a threat to his political aspirations, and Vernon, to whom Jon is a rival for Mary’s affections. For months Jon is subjected to a painful ostracism. Then, just when the young man’s earnestness and perseverance begin to win over many of the townsfolk and it appears that love may conquer all, tragedy strikes. As the country is caught up in war, so too are the young lovers swept up in events beyond their control, leaving both fighting for their very lives. If, against the odds, they are to be together, each will need to find the strength, the courage and the resourcefulness that beat only in a defiant heart.

Oh boy! I will begin my review with a tissue alert. You will be needing tissues while reading this book. :)

The novel tells the story of Jonathan Meyer, a young man who endures all matter of tragedies and injustices, and yet courageously perserveres through it all. And in the end becomes a stronger man that any parent, grandparent, or friend would be proud of. It's not only a tale of war though. It's also a tale of love that will make you believe that love does conquer all.

Defiant Heart deals with themes such as social injustice, love, and forgiveness. It is set against the backdrop of WWII and we are witness to the atrocities of prejudice committed in our own country. We also experience the war through the eyes and actions of our hero, Jon. I am extremely impressed with the historical accuracy and feel of the detail of the war.

There are wonderfully wrought supporting characters without whom Jon's story wouldn't have been so affecting. Jon's grandmother, for instance, who learns to let go of the past and love her grandson. Jon's friends, Walt, who was Jon's first friend in Jackson, and Ben, who taught Jon to fly are integral to the story. Jon's flight crew members are brilliantly drawn. And, of course, there's Mary, Jon's sweetheart. The intense bond between the two set them on a course to overcome any obstacle to be together. In fact, Jon says states at one point, "Nothing is going to keep us apart." And although many forces conspire against them, both Jon and Mary defiantly stand against them.

There is so much detail woven throughout this novel. The trauma Jon suffers that brings him to Jackson. The persecution he endures at the hands of so many. Mr. Steere effectively paces the action throughout the novel. The story he tells so compelling, heartbreaking, and ultimately heartwarming.

Yes, I do indeed love a well crafted piece of historical fiction. Defiant Heart is exactly that!

**I received an ecopy of this book as part of the blog tour in exchange for an honest review.
___ 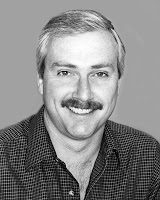 The son of a career Air Force officer, Marty Steere grew up on or near military installations across the country and overseas before settling in Southern California, where, when he's not writing, he practices law. Sea of Crises is his first novel. His second, Defiant Heart, was released on April 14, 2013.