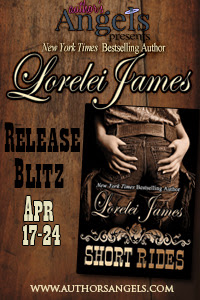 I've never reviewed one of Lorelei James' books on my blog I haven't read one since I started blogging. But when it comes to sexy, modern-day cowboys, no one does 'em better! So I'm very excited to be a part of the book blitz for Short Rides. These are short stories involving characters from her Rough Riders series, so it probably helps if you've read them. If you haven't read them, hop to it. And make sure you have a fan and/or ice water nearby. ;) 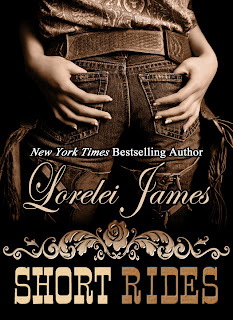 Short Rides is an anthology compilation of two novellas and one short story in the Rough Riders world. These are NOT meant to be read as standalone stories, but are a peek into favorite character’s lives after the happily ever after…

The stories included in the Short Rides anthology are:

Rough Road — Chassie, Trevor and Edgard Glanzer spend a romantic weekend away from the ranch and kids celebrating their anniversary…only to return home to face their biggest challenge yet.

All Knocked Up — Keely and Jack Donohue are having a baby. Given Keely’s raging pregnancy hormones, will Jack need to wear a cup in the delivery room?

*previously published in the Guns and Roses anthology in 2012

Chassie’s entire body seized up and she nearly dropped the bowl she was washing. She turned her head and met the startled eyes of her husband Trevor, who was packaging leftovers on the counter beside her. She managed to ask, “Where’d you hear that word?” in a steady voice.

“At school. A third-grader said my dads were faggots.”

She briefly closed her eyes. Living an unconventional lifestyle in a conservative rural area guaranteed this question would come up at some point—but she hadn’t expected it this soon. Their six-year-old son Westin had just started first grade a month ago.

Chassie rinsed and dried her hands before she turned around. “How about if we wait to talk about it until Papai is done giving Max his bath? You can stay up a little later tonight.”

Westin’s big blue eyes were somber, suspicious of the bribe. But he nodded and returned to his “homework”—an activity book they’d purchased after his disappointment at not having schoolwork every night in first grade.

Trevor came over and set his hands on her shoulders. He kissed her temple and whispered, “Come on, Chass. Baby, take a deep breath. We’ll get through this. That word doesn’t have the power to destroy what we’ve built unless we let it.”

Edgard sauntered into the kitchen, a bath towel draped over his forearm. “That boy is as slippery as an eel.” He wrapped the towel around Max like a straightjacket and hoisted him up  amidst Max’s happy shrieks and giggles. “Kiss Mama and Daddy goodnight, little streaker. Then if we can wrassle your jammies on fast, we’ll have time for one book.”

Chassie smooched both of Max’s chubby cheeks and smoothed her hand over his wet hair. “’Night, Max. Love you.”

Edgard’s gaze winged between Chassie and Trevor. He mouthed, “Problem?”

“I’ll fill you in upstairs. I need to check on Sophia anyway,” Trevor said. He looked at Chassie. “I’ll tuck her in if she hasn’t already crashed.”

Four-year-old Sophia ran at such high speed all day that many nights she conked out while watching TV or playing in her room.

Chassie finished cleaning the kitchen and headed to the basement to throw a load of clothes in the washer. Her mind had locked on Westin’s question. She knew one thing about her thoughtful son—the taunt hadn’t been tossed at him just today. Westin tried to figure things out on his own, so she worried he’d been dealing with defining the nasty word for longer than a day.

She leaned against the wall, fighting tears, fighting memories of the cruelty directed at her growing up. The jeers—lazy Indian, ugly squaw—still lingered years later. Back then she’d been so shy she hadn’t fought back. Her brother Dag might’ve gone after her tormentors, but he’d been fighting his own demons. No doubt he’d had the word faggot hurled at him.

What really caused that long ago hurt to deepen was the knowledge that if their father had known Dag’s sexual orientation, he would’ve flung that word at his son without hesitation.

When Chassie, Edgard and Trevor decided to add kids to their family, they all three worked every day to make sure their children knew they were loved. To make sure their children knew their parents loved each other. And to show them that love is what built and what sustained their lives. Especially when it was love that a lot of people didn’t understand.

Chassie held on to that thought as she scaled the stairs.

Trevor plugged in the nightlight and left the door open a crack before he headed down the hallway to the master bedroom.

He removed his long-sleeved shirt and T-shirt, tossing them in the hamper along with his dirty jeans. After washing his face and arms, he slipped on a pair of black sweatpants and a gray tank top. He’d need to channel his frustration after they talked to Westin, because guaranteed he’d wanna punch the shit out of something.

Goddamn. Trevor didn’t want to think along those lines, to remember the judgmental asshole he’d been at one time. He’d been raised that way—as had Chassie and Edgard—which was why they were raising their kids differently.

He perched on the edge of their gigantic custom-made bed, forearms resting on his thighs, his face aimed at the carpet. Westin and Sophia were aware their family was different from the norm. But due to divorces and remarriages, didn’t most kids these days deal with multiple parents? How was it anyone’s business how they lived in their own home? Or how they loved each other? He’d bet the ranch very few traditional family units were as attuned to each other as theirs. They had to work harder at communication because of having a third partner.

And he wouldn’t have it any other way—regardless of the societal repercussions.

Footsteps fell across the carpet. A pause. “Did you mean to leave the light on in Sophia’s room?” Edgard asked.

“No. Guess my mind was elsewhere.” Trevor glanced up. “Was she still awake?”

“Nah. She just yanked the covers over her head. I shut the light off.”

“Out. He didn’t last through one book, let alone two.” Edgard gave Trevor a once-over.

“We working out tonight?”

So Trevor told him.

Edgard didn’t say anything. Then he crouched in front of Trevor to get his attention.

“That’s not all of what’s bugging you.”

The man knew him so well. Trevor reached out and ran the back of his knuckles along Edgard’s jaw. He hadn’t shaved for a day and Trevor had the sudden need to feel beard burn on the inside of his thighs. On his chest. Scraping on his cheeks and neck as he kissed Edgard senseless.

“Dangerous to keep lookin’ at me like that, meu amor. Burning me alive with those fiery eyes of yours won’t make me forget the issue at hand, as much as I’d like to.”

“I know.” Trevor dropped his hand. “I f#ckin’ hate that I used to be that type of kid Westin is dealin’ with. Anything I didn’t understand, I belittled. I laughed when I made kids cry. Laughed. Jesus. How many people I bullied growing up would say I’m getting what I deserve? Seeing my son cry.” He exhaled. “I’m to the point I can handle what anyone calls us. But it breaks my damn heart that Westin is hearing that shit.”

“Hey. You’re not the same man you were. Thank God for that.” Edgard stood and held his hand out to Trevor. “Worrying about karma coming back to bite you in the ass won’t help us now.”

As soon as he was upright, Trevor tugged Edgard against his body and buried his face in Edgard’s neck. “I’m grateful every damn day that we have this life.”

“Some days I can’t believe we’ve all been together eight years. And other days, I feel like my life started when I met Chassie and you came back.” Trevor lifted his head. “Do you think we oughta cancel—”

Edgard covered his mouth with a brief kiss. “No. The three of us need the time together. Chassie will be relieved that we’d planned to keep Westin out of school tomorrow anyway.”

“I was surprised. It was a sweet, romantic thing to plan, Trev.”

“What can I say? You and Chassie bring out the best in me.” Trevor kissed him, more than a soft peck but less than the tongue tangling soul kiss he preferred. “Let’s go talk to our son.”