Happy Monday, y'all! I'm ecstatic to be a part of the blog tour for Robyn Jones' newest novel, Soul Bender. This is the second book in her A Touched Girl series and I have a review of both Soul Bender and the first book in the series, Soul Walker. I also have Robyn's Top Ten Favorite Male Characters! :) Oh, and the giveaway is awesome! So don't forget to enter that.

This tour is presented by JC's Book Haven. For a list of all the participating blogs, click here. 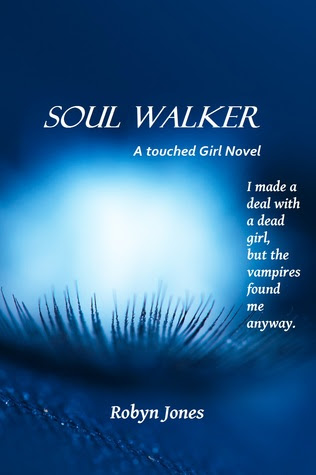 Synopsis from GoodReads:
"I need to get you to the hospital." He was taking responsibility for me. Only my parents had that job. I stretched my hand out in protest, but the lack of depth perception had my trembling fingers grazing his overheated neck. I swore his whole body shook.When five-year-old Anna Pierce is offered a chance to have nightmare-free nights for the small price of her voice, she jumps at it. Silence has to be better than all-consuming dreams about blood and death and fangy monsters. The bargain she strikes comes with a secondary benefit, visions of a person's future potential. The combination of visions and silence changes her very nature and soon she's diagnosed with autism. Twelve years of living in her head comes to a screeching halt the moment Peter Davis pulls her out of an icy river. Her new life has her twirling, tiptoeing, and crashing through unfamiliar territory, one filled with a cranky grandma, a knocked up cousin, an unpleasant cousin, a bunch of mostly good vampires, and the boy who rescued her. To top it all off, the deal she made at five is no more. Anna is expected to talk, to figure out her resurfacing nightmares, and to control her ever-growing powers. And she'd better get it done soon because if the good vamps want a piece of a living, breathing Touched girl, the evil ones simply want. They'll take Anna for their very own. 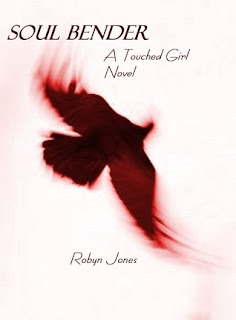 How much can a soul take before it breaks?

Anna Pierce has a vampire boyfriend, a driver's license, real friends for the first time since she was five, and now she faces one of her biggest challenges, senior year at a mostly all girls Catholic high school. Sure, she's a member of the talking crowd now, but she'll never be like everyone else. How can she when the first of her kind has camped out in her dreams?

Little dead girl Emily decides Anna's destiny can wait no longer. It's time for this generation's Touched girl to hunt. Trained in a virtual dream landscape to destroy all in her path, Anna must
choose between her destiny, the one beat into her on a nightly basis, and her legacy, the one instilled in her by her parents.

Along the way, old enemies remain dutifully obsessed, new foes lurk in the shadows, and odd Little Duckie Anna Pierce sets out to be social.

I love words. They're what I love most about reading (and writing). I love simple words and flowery words. And I love it when words conjure images for me. I love all the word pictures. It's like a dessert - rich and decadent. And so very satisfying.

Robyn Jones delivered a most delectable dessert with these first two books. She has created a finely crafted set of characters and an entirely new twist on vampires. The pictures she evokes with her incredible prose are fantastic. My goodness, I can even smell the scents she describes. I want to write so many words to describe my thoughts and feelings about these books and yet I'm not sure I can do them justice. But I'll give it a whirl.

In Soul Walker, we are introduced to Anna Pierce. Anna is a special girl. Not having spoken since she was 5, a tragic accident leads to the discovery of her voice. It also leads to the introduction to a young man, Peter Davis, who seems to know everything about Anna and her life. The discoveries don't stop there.

Anna has a gift. She was diagnosed with autism at 5. Along with the special quirks and being non-verbal, Anna also has the gift of being able to see souls. This ability makes her of special interest to certain people and that's not necessarily a positive thing.

Following the tragedy that forever altered her life, Anna's new life revolves around her grandmother, her two cousins, Sara and Betsy, and, of course, Peter. However, Anna's gift and those who want to use her gift for the own gain, leave Anna fighting to live her new life on her own terms.

Robyn's writing is marvelous. It drew such intense emotions from me. I smiled, laughed, cried...her characters are so well developed that I was captivated by them all. I love Anna! I love that she's flawed. I love all her quirks and her inner strength that I don't think she even knew she had. I love watching her brain work - I know a thing or two about being right-brained, and thinking in pictures. Peter was precious in all his protectiveness and love for Anna. Ella, Anna's grandmother, provides a bit of humor with her gruff mannerisms. Sara, the sweet cousin, and Betsy, the snarky cousin, are also lovable in their care for Anna. And the action - the sights, sounds, smells are so vividly portrayed. I also enjoyed the vampires. :) I love vampires and I love it when an author puts their own spin on vampires. Anna's gift and the powers it bestows - at least in the eyes of the vampires - was fresh and intriguing. Soul Walker is a completely compelling and utterly satisfying read.

In Soul Bender, Anna is learning to control all her new powers and still love life as she chooses. She has new obstacles and challenges to face. In particular, those she must face as a senior at a new school. She has her cousins for support, as well as a well-meaning teacher and vice-principal. She also makes a new friend in a rule-breaking gamer boy. Outside of school, there are the vampires she must learn to protect herself from as she embraces her destiny as a Touched Girl. That destiny is also accepted on Anna's terms. And brings about new revelations.

Soul Bender was equally emotionally charged and enthralling. The emotional growth Anna undergoes in this book are incredible to behold. We meet new vampires and learn more about them and magic. Anna's abilities in relation to the vampires, and their souls, is riveting. We also meet new characters within the walls of Anna's new school. I delighted in the theological debates she engages in with her Theology teacher. Anna's attending a Catholic school but doesn't subscribe to that particular brand of religion. With all her interactions among family and friends we see Anna's personal growth throughout the book.

Anna endured a great number of trials in Soul Walker. She continues to be tested in Soul Bender. She gracefully faces each challenge. I love her strength. Anna has some epiphanies about herself in this book and the way in which she handles them further displays her strength and the emotional growth she experiences.

Again, I must note the exquisite way Robyn Jones tenders Anna's story. With her use of language, she paints every image of Anna's life in ways that amaze. Soul Bender was just as delectable and satisfying to read. I will anxiously await the next in the series.

I rate both books 5 Worms!


10. Dorian from Richelle Mead's Dark Swan series. He is fiercely loyal and at the same time emotionally immature. He's a total dominant who has a thing for fancy rope, yep, rope.

9. Spike from Buffy the Vampire Slayer. I don't know of a better crafted multi-layer bad guy. I could have done with less physical fighting with Buffy toward the end of the series, but I still love him.

8. Gaius Baltar from Battlestar Galatica. He is no one's hero. He's selfish, brilliant, and a total egomaniac. He's also sort of to blame for the human race nearly being wiped out.

6. Lucas from Tammara Webber's Easy. This guy is seriously awesome. He rides a motorcycle, saves girls from would be rapists, works at a coffee shop.

5. Megamind from the Megamind movie. He's also evil, but with heart. Then he falls in love and has to be the good guy.

4. Adrian from Vampire Academy and Bloodlines. I fell in love with him from the moment he saucily flirted with Rose at the ski resort in VA.

3. Ian from The Host. His character stayed with me for so long.

2. Charles Cornick from Patricia Briggs' Alpha and Omega series. Charles is a three hundred year old werewolf and the enforcer for all the North American packs. He's madly in love with Anna. He's loyal to his father, the ultimate Alpha. He's plain cool.

1. Adam Hauptman from Patricia Briggs' Mercy Thompson series. I could fill the entire list with characters from Briggs' novels because she knows how to layer on the traits and give us people we can't live without. Adam is the Alpha of the Tri-Cities. He's chivalrous, bossy, and hot! 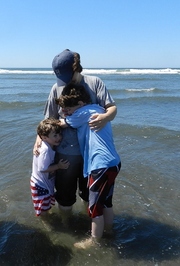 I'm the mom of two hardcore boys. My oldest trained me to be matter-of-fact, no frills. My
youngest wants the whole singsongy sweet package. Thank goodness for reading and writing because they are my sanity makers. I know life is all about the journey, that's why I like my fiction to be all about the destination. I want to be taken somewhere not here when I read, same goes with the stories I create. Thrills, chills, tears, and laughter, but there has to be something to hold on to at the end.

Goodreads = http://www.goodreads.com/author/show/6859637.Robyn_Jones
Posted by Bookworm Brandee at 2:17 AM