Welcome to my second stop on the blog tour for
Just the Messenger by Ninette Swann. Today's stop includes my interview with Ninette, all the necessary details for the book, and a giveaway. If you missed my review, you can read it here.

BB: What was the inspiration behind Just the Messenger?

NS: Just the Messenger is a result of a publishing contract I won off a ménage scene I wrote for a competition. It is my first ménage, and I would never have ventured there without the contest, so I'm glad that happened! After writing the scene, I had to build a story that would make sense around it. A spy thriller was the only choice.

BB: Did you do any research for the book?

NS: Yes, to get the detail right, I had to research lifestyles in Colombia, drug cartels and CIA workings and methods. It's the most research I've done for a book so far!

BB: Was there a particular part of the book you really enjoyed writing?

NS: I really enjoyed the climax of the book where the aims of the different characters and their personalities all come to the fore. Warren trying to get his story, Gracie trying to get them out of there, Gene trying to save the day from afar with much frustration, and Marco quietly making the whole thing turn.

BB: Why are readers going to love Just the Messenger?

NS: I think the fast-paced action helps readers keep turning the pages. The relationship between the characters is strong as well. There are bar fights, explosions, drug cartels, spies, conspiracies and romance. It's pretty jam-packed.

BB: What do you do when you're not writing?

NS: I have four-year-old twins and I stay at home with them, and do all the cooking and cleaning. I blog about it daily, write journalistic pieces on parenting, feminism and polemics for magazines and newspapers freelance (I used to be a television news producer). I'm also a content editor for a publishing house, and I'm going to grad school right now for my master's in mass communications too.

Ninette's Five Favorites:
My kids
My husband
The Body Combat course I take
Happy hour with friends
The internet 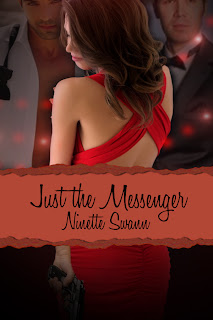 When Graciela Merced fumbles a package she’s delivering for her mysterious and sexy boss, Gene Hardy, she finds out he’s more than just a wealthy photographer. Prepared to lose her job, she confronts him…and ends up embroiled in the tricky takedown of a powerful drug cartel pushing cocaine into the heart of New York City.

Marco Valencia is an undercover agent, working against time—and against Gene Hardy—to crack Angel’s Drug Cartel before the story makes it to the press. When Hardy’s luscious Venezuelan messenger literally falls at his feet, he has no idea just how well he’ll get to know the beauty or how difficult it will be to drop her.

Hardened by experience, Gene Hardy takes his undercover work seriously, and charges a hefty price. When Grace makes a careless mistake and hurls him back into the visage of Marco Valencia, he must either fire her, or involve her in a twisted plot that could kill them all.

As the two men battle over their feelings for Graciela—and their attraction to each other—one thing becomes perfectly clear.
Grace is much more than just the messenger.

Get Just the Messenger here:


All Romance Ebooks
Barnes and Noble
No Boundaries Press

Ninette Swann is a journalist turned novelist who writes her books from sunny Florida in between parenting, freelancing and editing. She writes all genre of romance, including contemporary, thriller, suspense, and dystopian. Her books include Hit and Stay, Body Combat, Finding Home, Just the Messenger and Direct Combat.