As y'all know, Lexxie @(un)Conventional Bookviews buddy read the first book in Tara Lain's Love in Laguna series, Knight of Ocean Avenue. We loved it so much, we read the second in the series, Knave of Broken Hearts. It was a hit, too. So we'll be buddy reading the entire series. :) I hope y'all will enjoy our chat and will decide to pick up this wonderful series! 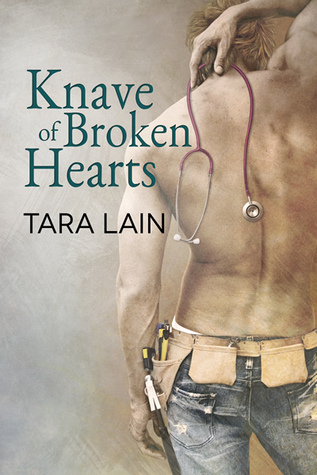 Knave of Broken Hearts by Tara Lain
Love in Laguna #2
Release Date: August 3, 2015
Genre: Adult, M/M Romance, Contemporary Romance
Source: I received a complimentary copy from the author in exchange for an honest review
Rating: 4 Bookworms
Goodreads
Synopsis
Jim Carney has a full time job--running from himself. Since he walked out on his wealthy family at sixteen because he'd wrecked his best friend's life over some yaoi graphic novels, Jim has lived a macho, blue-collar existence of too much booze and too little responsibility. Then Billy Ballew, the man Jim most admires, gives Jim a chance to come through as his construction supervisor. For once, Jim is determined to make someone proud. Then Jim goes in for a physical for his new job and his yaoi dream comes to life in the form of cardiologist Ken Tanaka. Jim discovers he has two heart problems--a wonky mitral valve and a serious attraction to his doctor. But Ken is a major player, and Jim might be just a notch on the doc's stethoscope. To Ken, Jim is unforgettable--but the living embodiment of his traditional family's worst nightmares.

How come the minutes Jim decides to be responsible, he finds himself taking care of his kid brother, getting a proposal from a wealthy woman, making a deal with the devil, and winding up in the hospital--when all he really wants is the Knave of Broken Hearts?

Lexxie: What did you think? I have to admit I was very surprised that Jim was the main character in Knave of Broken Hearts, but then, thinking back, he was supportive of Billy straight away, and he seemed very open-minded. And as the story unfolded, it was less strange to have Jim be the second construction worker who was into guys. And Ken *sighs* he was a really, really good character as well! I think one of the reasons why he was a player was because of all the pressure from his mom. And the one guy she did manage to set him up with was such a total scumbag!

Ian totally broke my heart, though. And I was so happy that Jim managed to step up and take him in. I have never understood parents who can just throw their kids out like that. Like really? My oldest daughter had a friend in school whose parents threw him out when he came out to them, and I had so much trouble wrapping my head around that. My children are precious, and no matter whom they may fall in love with can change how much I love them! Also, it's not really important that I like the person they will spend their lives with, what's important is that they find the right person for them, and that they will be as happy as possible together.

One of the things I really enjoyed was all the changes Jim went through, from being the guy who drank too much - possibly to forget or make himself not think at all about not really wanting to be with a woman - to one who took on responsibilities at work, and also with his brother. Ian being quite a bit younger than Jim worked really well for me as well, because they could help each other - seeing things from different perspectives is always good.

I would have loved to actually see a little more of Shaz and Billy, even if it was great to see their wedding, and then know that they went on their honeymoon.

What did you think? I loved Knave of Broken Hearts even more than Knight of Ocean Avenue :)

Me: I have to admit that it didn't occur to me that Jim might also be gay. I thought he just happened to be this really open-minded blue-collar guy. And I liked that about him. Finding out he was gay just made me admire him all the more. The way he'd taken on life - even if it was guilt that drove him - and the things he accomplished, were pretty amazing. He made himself out to be this slacker of a guy, but I never felt that way about him. I felt like it was an image he was trying to perpetuate with the crew. I did like watching him open up and be more himself. You're right in that he probably drank in order to bury the fact that he didn't really want to be with a woman...and then to have an excuse when he couldn't 'perform'. But his taking on the responsibilities Billy handed him as well as taking in his brother left me feeling warm all over. Because that's who Jim really was.

And Ken...yeah, I really liked him as well. I fell for him when he caught Jim on the dance floor. *sigh* He'd accomplished quite a bit in his young life and while I admired him, I felt for him since it seemed as though so much of what he did was driven by his mother. I did appreciate the fact that his mother was accepting of him but she did have very poor taste in potential partners for her son. That guy...ugh! He was young and smarmy, wasn't he? And he ended up being far worse than I'd thought.

I loved Ian as well. In fact, I'm hoping we get more about him. :) I'm glad that he had Jim to turn to even if they hadn't been that close. He seems like a really bright young man and I was glad he was there for Jim to talk to - it was heartwarming that they had something so major to bond over.

As for Jim & Ian's dad...he's the scummiest of scum. To turn his children out for their perceived 'flaws'. And then use them for his own gain?!? Not good parent material. AT.ALL. You have children because you want to love and cherish them, nurture them, and provide them with an unconditional love only parents can give. So I don't understand anyone treating their child like this. It breaks me heart and enrages me all at the same time. You're so right...we don't have to like who our child falls in love with...we need to be happy that they're happy with whomever they choose.

One thing I really liked about Knave of Broken Hearts was that Lain put together these two guys who not only seemed to live in two different worlds - blue-collar vs white-collar - but also from two different cultures. So not only were they battling a society who isn't always accepting and different social strata, but Jim had the dubious task of winning over Ken's "Tiger" mom who seemed deeply rooted in Japanese traditions.

I would have liked to have seen more of Billy and Shaz, too. But I was happy that we got to see them at their wedding. And I was really glad Billy was there for Jim.

I do want to say that I felt there was something missing between Jim and Ken. I don't know what it is - maybe there wasn't as much sexual tension between them as there was between Billy and Shaz. I'm not sure. But I didn't feel like I was there with them yet at the end. I wanted a little more build-up, I guess. And I wish there'd been more exploration of both sets of parents. I'm willing to bet there's something about Jim and Ian's dad that he doesn't want out in the open. And Ken's parents...I didn't feel the closeness between him and his mom that would have helped me better understand why he went along with her wishes. (maybe this is a cultural difference for me?) Also, his dad never said anything. What were his feelings about his son?

Overall, I really enjoyed KoBH. But there was a little something missing for me that made it not quite as enjoyable as KoOA.

So when is the next on releasing?!? ;) I hope you're willing to buddy read #3 with me, my friend! It adds a whole other level to reading pleasure when I get to share it with you! <3

I did not think for a second that Jim was gay while I was reading Knight of Ocean Avenue, so we were both just feeling as if he was a very open-minded guy. I didn't find him to be a slacker either, just unhappy, and therefore drinking too much. The way he couldn't get things gong with his girlfriend and knowing he wasn't treating her right because he wasn't completely honest with her - or himself - must have been hard to live with.

Ken and Jim on the dance floor *Sighs* yeah, I thought that first meeting was very sweet and telling. His mom was too much of a meddler for me, like only someone Japanese could be good enough for her son - only based on nationality and nothing else. I didn't like that guy at all, and actually found Ken to be very understanding and nice - even if that really didn't work so well for him.

Ian needs his own book! The way he was so open with Jim and other people made me love him straight away. Jim and Ian's dad was definitely a scumbag, yeah. And there was one comment between the brothers that made me think we just might read more about the dad in the future, too...

More different than Ken and Jim would have been quite difficult to come up with, I think. And I don't actually think Ken was all that close to his mom, I think he was so used to the Japanese way of respecting elders, and following his parents lead that he just did that without question. Even when he felt like he should tell her to stop her machinations, he just couldn't because he had been raised differently. I think some cultures have much stronger traditions when it comes to respecting parents, and obeying parents - even after the children are adults.

I loved Ken and Jim from the very start, and the way they ran into each other by chance, and then on purpose made me feel like them getting together was inevitable, and I loved it :) And while I loved Shaz and Billy, I enjoyed Jim and Ken even more, actually :)

Prince of Playhouse is scheduled to be released in April 2016, and of course I'll buddy read it with you, my dear :)

I just read a quote today - something to the effect that it's so much easier to just do as you're expected to. That made me think of Ken because you're right. It wasn't so much that he was close to her...it was just easier to do what was expected. Only it wasn't in this one case.

I agree that Ian should have his own book - I hope he does. He's adorable! And I know what comment you're talking about...yeah, it made me think too. I'm interested to see if anything comes from that.

So you enjoyed Jim and Ken more, huh? I'm still a Billy and Shaz fan...there was something about their story that resonated with me. Oh, I'm thinking it was Shaz putting Billy's mom in her place. ;) LOL

It's going to be hard to wait for Prince of Playhouse but I look forward to buddy reading it with you. :)