Happy Release Week, Jana Aston!!
RIGHT released on April 6th!
Today, I have an excerpt, my review, and a giveaway for y'all!
Sit back, enjoy, and get your one-click finger ready! ;) 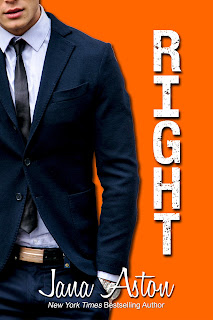 My childhood was perfect.

I’ve led a charmed life, and I’m not going to blow it now by picking the wrong guy.

I’ve got my sights set on my brother’s best friend.

He’s known my family for years. He’s reliable and kind and handsome.

Sure, he’s been avoiding me since I was six.

I’m a bit aggressive for him, maybe.

But he’s the one… right? 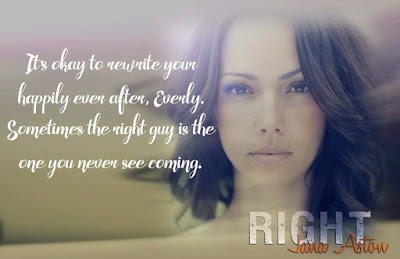 "What about you, Everly?'
"What about me what?" I ask, confused.
"Are you seeing anyone?" He looks over at me. "At school?"
Not successfully, I think to myself. "No, not right now. I'm kinda taking a break this semester."
"Taking a break," Eric repeats, glancing over at me. "That's not like you. At all."
I shrug. "It's exhausting."
"What's exhausting?" he asks, frowning.
"Um--" Breaking and entering, I think. But I can't tell him that.
"You know, the whole 'does he like me' thing."
"If you have to wonder if a guy likes you, then he's not the right guy for you, Everly."
"Maybe it's more complicated than that."
"It's never more complicated than that."

Oh my goodness! Right was laugh-out-loud funny and also managed to wring a few tears! Ms. Aston, I'm happy to say, is *not* a one-hit wonder, y'all. She delivered another well-written story!

When I met Everly in Wrong, I adored her. She's nothing like me but the kind of person I wish I could be. She lives in the moment while also meticulously scheming planning both for herself and anyone else she things she can help (usually with laughable results). She has no filter - what she's thinking typically comes out of her mouth. She's a girl who uses her nail polish to set the mood - whether it be for a job interview or a date. She's a girl with a huge heart. She's delightful and I adore her!

Sawyer...*swoon* I loved him from the start. He wasn't afraid to call Everly on her shit, which was hysterical. He was her match. He saw what he wanted and went about getting it - even employing some of Everly's tactics to do it. With him and Everly - it was a lightning strike. And the repercussions were delicious.

What they had together though - what they built - was solid. There may have been a few doubts, but not on my part. As Sawyer said,

And they proved they'll be able to weather storms.

The interplay between them was so fun...it was hilarious! Ms. Aston nails the humor in the dialog and in the action. Some of their conversations had me rolling in laughter. And Everly's reactions to Sawyer's wooing techniques - he really was just like her. And it was a pleasure to watch.

Ms. Aston proved she's a voice that's here to stay. And I look forward to seeing what she comes up with next! 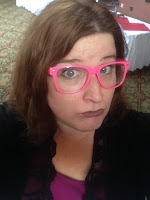 She quit her super boring day job to whip up another book & is hoping that was not a stupid idea.

In her defense, it was really boring.

♥ OTHER BOOKS BY JANA ASTON ♥