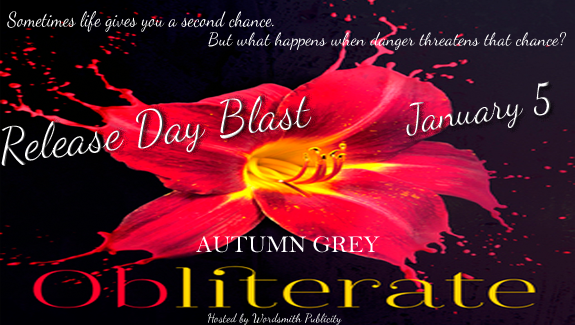 Happy Release Day, Autumn Grey! Obliterate, the second book in the Havoc Trilogy is now available! I've got all the details about the book, an excerpt, and a giveaway below. Also, you can read my review of Obliterate here. 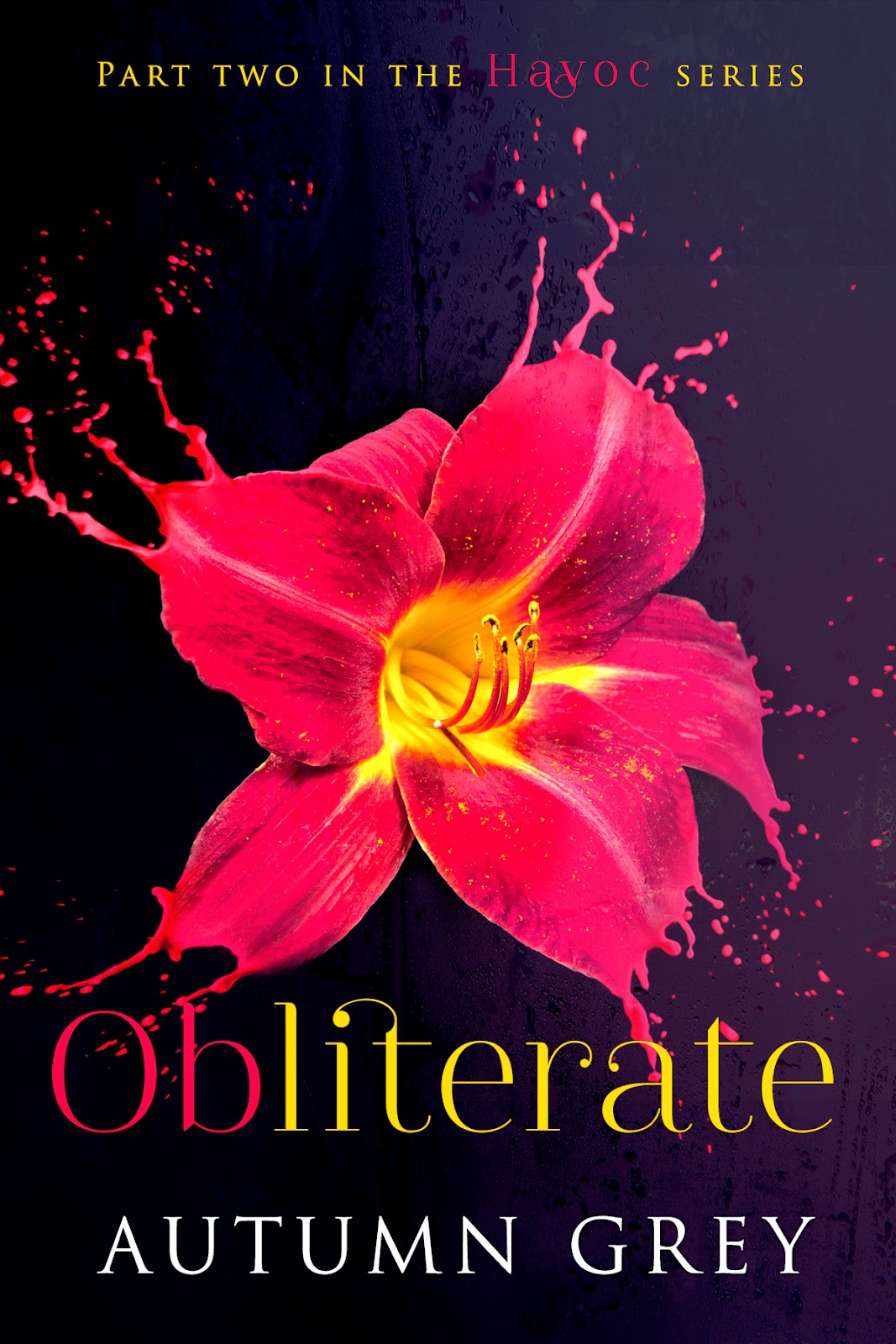 Synopsis
"I knew the moment I gave in to pursuing Selene that trouble would follow me. It always does. I should have resisted."

Remington St. Germain is at a crossroads. He can either go after the one person who makes him feel as if he matters—the only person to ever calm the demons that roam his mind—or forget about her. The latter is not an option, even though there is a chance she might reject him. But, damn it all to hell, he will convince her. He has to. Otherwise, he will be right back where he was before she came into his life.


Selene Michaels' stay in Paris is only temporary. She shouldn't get too attached to Remington and his son, Adrien. But, Remington makes her feel alive and reckless, and Adrien makes her loss almost bearable. They complete her. She has a feeling there is more to Remington than a doting single father and her overprotective Prince Charming. Besides, the risk of being with them still looms closeby and she will do anything to keep them safe.


Sometimes life gives you a second chance. But what happens when danger threatens that chance?

Sultry, seductive French music played in the background while I posed in different positions on the wide, four-poster, canopy bed. Sheer white curtains were draped on the black frame with large white pillows tossed haphazardly on the bed.

We'd been shooting for the past thirty minutes when the photographer, a tall, spindly guy with a ponytail, announced we were taking a break. He glanced at me, a frustrated look on his face. I heaved a breath, tossed aside the large pillow I'd been holding against my chest, and slid off the bed. This session had been a bust. From the moment Remington dropped me at Curves, my mind was in total chaos, and kept wandering back to the flowers and the person in a trench coat. Even the Chardonnay I'd been sipping to loosen me up hadn't worked.

I fluffed my hair, before grabbing a ribbon from a table and tying my hair as I walked toward one of the women who were assisting with the shoot.

"Thank you," I said, smiling, and took a white silk robe from her hand and slipped it on.

I caught sight of Remington, standing beside Grace, talking in low tones. His eyes were focused on me as I padded barefoot toward them.

"Hey, baby," I greeted him, pressing my lips to his cheek, but he moved his face so our mouths collided. One of his hands slid around my waist and pulled me to him. One thing I enjoyed about Remington was he wasn't shy about showing his affection in public. No one seemed to mind anyway.

By the time I pulled back, my body felt alive with this man's attention and kisses. I glanced at Grace to find her smiling hugely, giving me a thumbs-up, and fanning herself.

"Are you enjoying yourself?" Remington asked, his deep voice teasing the lust in me as his hand traced circles on my lower back, sending tingles down my spine.

He narrowed his eyes and I could imagine the wheels of his mind turning.

"This girl needs to relax. Let herself go," Grace said, waving her hand. "I have never seen you this nervous, Selene."

Remington's hand halted its soothing motions. "I just need a few minutes. I didn't think I would be this nervous, getting back into modeling."

Grace patted her flushed cheeks and I rolled my eyes at Remington's blatant use of charm. "Certainly, and please call me Grace."

"You're incorrigible, St. Germain," I said as he led me into the hallway, his arm a steel band of heat around my waist.

He grinned at me, hitting me with a smile more potent than he had given Grace. "The room," he murmured. I frowned up at him, wondering what he was talking about.

"Not what I have in mind." He squeezed my butt to make his point.

"Oh!" My face heated at the suggestion. "So what do you have in mind?" I tossed a flirtatious smile over my shoulder as I opened the door, letting us in. He kicked it shut with his foot as soon as we were inside and swung around, pushing me against the door, and pressing his body against mine. He gripped my hips, pulling me to him. 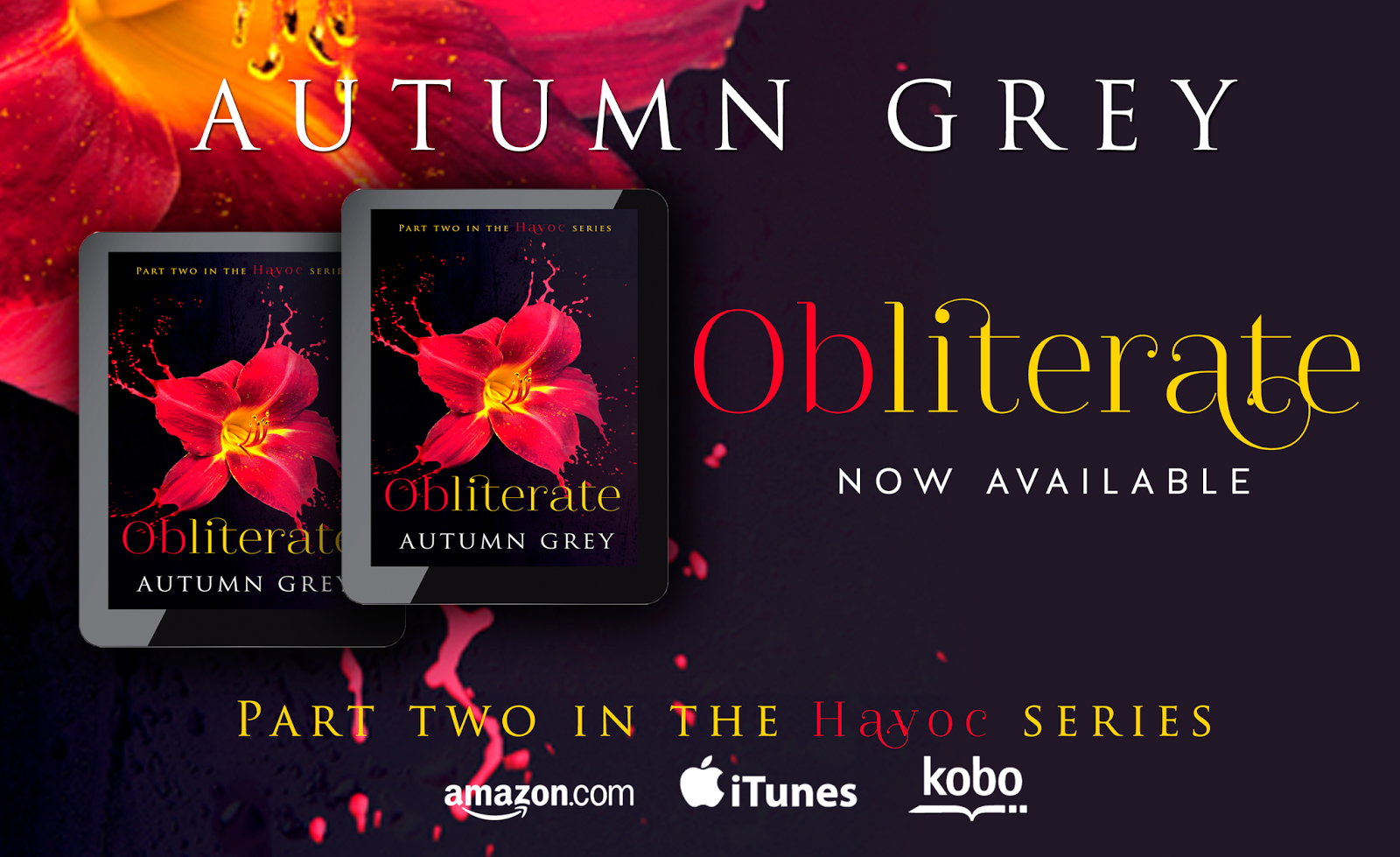 Autumn Grey is the author of the soon to be released contemporary romance, Havoc, Obliterate, Mend (Havoc series). And just like her characters, she is quirky, sometimes funny and definitely flawed. She writes sexy contemporary romances full of drama, steamy kisses and happy ever afters.