Hey y'all! I'm beyond thrilled to be a part of the blitz for Stephanie Parent's Forty Nights. This is the conclusion of Neima's Ark and I'm excited to share it with y'all. I've already finished and loved Forty Nights, so be watching for my review. :) I have all the important details on both books for y'all, an excerpt, and a giveaway.

FYI, Forty Days, the first book in Neima's Ark, is currently **FREE** on Amazon and B&N. (the links are below)

This blitz was organized by YA Bound Book Tours. 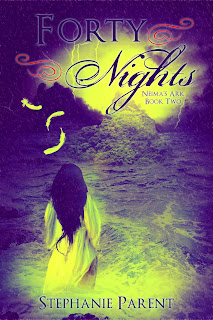 Summary from Goodreads
Neima, her family, and her grandfather Noah have found themselves trapped aboard an ark as a great flood destroys all life in the world. As their time aboard the ark lengthens, food begins to run out, wild animals grow restless, and family tensions become as much of a
threat as the flood outside. In the second and final installment of Neima’s Ark, the stakes are higher, the conflicts are greater, and Neima finds herself facing a choice as impossible as the destruction all around her.

Forty Nights is a continuation of the story begun in Forty Days, and it’s recommended that you read Forty Days first for the best experience. Forty Nights does, however, contain a character guide to refresh readers’ memories. The Neima’s Ark series is a historical, feminist reimagining of the story of Noah’s Ark rather than a religiously oriented one, and the novels are best suited for readers who are comfortable with new interpretations of biblical stories.

PRAISE FOR THE NEIMA’S ARK SERIES

“Stephanie Parent takes a story I would have immediately shrugged off and turned it intoa story with a surprising amount of reality and despite being religious based is not at all religious. Stephanie somehow created a paradox… When I think of a word to describe this story I think, layers. The tension is extremely layered. We get internal tension among thecharacters, tension relating to the animals, and tension from the storming raging outside. It’s not even supernatural elements, it’s all practical points like food and animal needs. The characters are also well defined and fleshed out.”
--Michelle, In Libris Veritas

The romance is slow and imperfect, but it's realistic and believable. I can honestly say that this love story is one of if not the best one I've read so far…a very thrilling read full of some great twists…[the ending] was everything I could have asked for and more, it was a perfect ending to an imperfectly perfect story.
--Zachary Flye, Zach’s YA Reviews 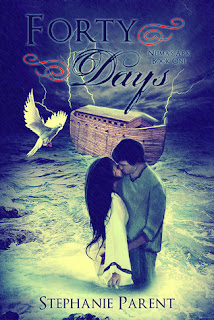 Summary from Goodreads
The entire village knows Neima’s grandfather is a madman. For years the old man has prophesied that a great flood is coming, a flood disastrous enough to blot out the entire earth. He’s even built an enormous ark that he claims will allow his family to survive the deluge. But no one believes the ravings of a lunatic…

…until the rain starts. And doesn’t stop. Soon sixteen-year-old Neima finds her entire world transformed, her life and those of the people she loves in peril. Trapped on the ark with her grandfather Noah, the rest of her family, and a noisy, filthy, and hungry assortment of wild animals, will Neima find a way to survive?

With lions, tigers, and bears oh my, elephants and flamingos too, along with rivalries and betrayals, a mysterious stowaway, and perhaps even an unexpected romance, FORTY DAYS is not your grandfather’s Noah’s Ark story.

FORTY DAYS is approximately 45000 words, the length of a shorter novel, and is the first installment in a two-part epic story. It does contain a cliffhanger ending.

Readers looking for a traditional, religiously oriented version of the Noah’s Ark story should be warned that FORTY DAYS may not appeal to them. The novel will, however, appeal to lovers of apocalyptic fiction, historical fiction, and romance, as well as anyone who’s ever dreamed of having a baby elephant as a pet.

Shai turns toward the cage and says, “The other dove—he’s rejected Aliye, hasn’t he? We can’t put her back in that cage now. We kept them apart for too long.”

“Yes, I—I think so.” I have the sick feeling that we’ve stepped beyond our place somehow, taking these animals, separating and pairing them off, keeping them caged here. We do not own these creatures, don’t control them even if we try to—certainly we can’t control the tigers, the jackals, the wolves. Look what’s happened when we’ve tried to interfere in the lives of just two little birds.

Another thought, less fully formed, tugs at the edges of my consciousness and leaves me feeling even sicker: isn’t this ark really one large, none-too-sturdy cage? And that question leads to another, more unsettling one: If the ark is a cage, just how much longer can its bars hold us all together? How long before, within its walls, we tear ourselves apart? 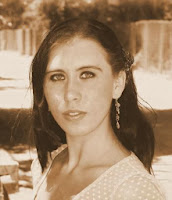 Stephanie Parent is a graduate of the Master of Professional Writing program at USC and attended the Baltimore School for the Arts as a piano major. She moved to Los Angeles because of Francesca Lia Block's WEETZIE BAT books, which might give you some idea of how much books mean to her. She also loves dogs, books about dogs, and sugary coffee drinks both hot and cold.