Welcome to my stop on the blog tour for Erica Crouch's Entice. My stop includes all the important details for the book and my review.

This tour is presented by Patchwork Press. 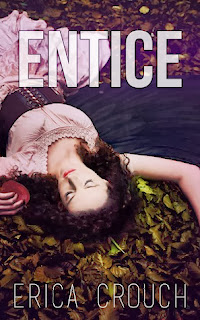 Synopsis
With the aftertaste of Heaven still strong, Pen and Azael cloak themselves in their new demonic destinies, fighting for Lucifer against the angels. Pen, warring against former friends turned vengeful enemies, still struggles with defecting to Hell. But in one short battle, they go from forgotten to famous, thrust into the spotlight where she has no room for uncertainty.Suddenly top-tiered demons, they’re tasked with seeing through hell’s new agenda: corrupting man. But tarnishing Eden isn’t as simple as they thought it would be, especially when they’re forced to work with another team of demons who are trying to claw their way up the ladder of power.

Entice is the prequel to Ignite. Here we see Pen and Azael in Hell, after their fall but prior to the events in Ignite. We see the events which led to their being on Earth. If you missed my review of Ignite, which I adored, you can read it here.

I've said it before, but I love words. Ms. Crouch's use of words is captivating. She lyrically draws images and her prose is exquisite and delightful to read. I also love her literary references and quotes. :) I somehow managed to miss the significance of Pen's name in Ignite. Pen was a scribe in Heaven - and the importance of that really hit me in Entice. I adore Pen's love of language and stories and her indelible belief in the power of words. I'm curious to see if 'the pen is mightier than the sword' holds true for Pen.

I loved this look at Pen. In Entice, we see that Pen, despite her fall from Heaven, hasn't lost her humanity. Seeing her compassion in Hell made the transformation Pen experiences in Ignite more meaningful. We are also made privy to the reasons behind her decision to fall with Azael. We witness her struggle with that decision. Pen longs for the acceptance and sense of belonging she once had with Azael. Thought the course of Entice, she realizes that is something she may never have again. But now that she's fallen, Azael is all she has.

Azael isn't much different in Entice than he is in Ignite. He's angry and arrogant. He believes his place is at Lucifer's side - that he deserves that place following his role in Michael's demise. He believes his actions swung the tide of the war between Heaven and Hell.

In Entice, the action revolves around Pen and Azael's mission in Eden. Following the battle which brought about Michael's death, Azael and Pen are give rank as top-tier demons. They are then tasked with bringing about the downfall of man - a race against two other minions of Hell. The tale Ms. Crouch weaves around this well-known story was fascinating.

Ms Crouch's description of Hell is interesting. Hell, in her imaginings, is cold, icy and blue. I rather like this portrayal. It naturally follows that her Heaven is fiery - angels wielding swords of flame. I also appreciated Pen's reasons for being disgruntled with Heaven - not that it meant she wanted to choose Hell.


"I don't believe in censorship," I smirk back at him. "It leads to arroganze, corruption, and secrets." Loc 518

"Secrets and pride corrupt even the so-called incorruptible." Loc 1458

I truly reveled in getting this backstory for Pen. It helped in my understanding of why Pen chose to follow Azael out of Heaven and why she continued following him. It also provided the foundation to explain her actions in Ignite. And it was gorgeously written.


"I tie my tongue around the unwanted gift I've burdened myself with - caring - and bury it in the pit of my stomach." Loc 788

"I think I'll be walking the line between Heaven and Hell forever - swaying toward the darkness but always reaching to the light." Loc 1754

I’m trapped in a sea of screams. The cries of war swell and break like turbulent waves, pulling back for a breath before raging forward again to knock me off my feet and drown me under the noise. Voices claw desperately, a greedy symphony of agony that comes from every direction, and I can’t separate out one wail from another. They all merge into one horrifying howl so loud I’m surprised my eardrums haven’t begun to bleed.

Maybe they have; there’s blood everywhere. Who’s to say some of it isn’t mine?

I swing out with my dagger and cut an angel across her cheek. She retaliates, quickly loading a small golden slingshot with molten rocks. Her thin fingers wrap around the weapon and she draws it back, her muscles tense. I spot her mistake before she does, and when she lets the sling go, the rocks soar past me, striking one of her comrades. A slight miscalculation, and I live. The angel she struck, however, is not so lucky. His wings catch on fire, and the demon he was locked in battle with uses the distraction to deliver the final blow.

Her eyes grow wide with horror. A scream begins to bloom on her lips but I pluck away her voice before it flowers, plunging my dagger deep into her chest. She falls to the ground, and I turn away from her just in time to see another angel charging me with a long spear that is dripping in already spilled blood. His eyes are feral and dark, and I duck just before the spear skewers me, sending him toppling to the ground.

Sprawled on his back, the tan angel looks up at me and we lock eyes. Faintly, in the deep recesses of my mind, I recognize him. I know you. And he knows me—but it didn’t stop him from trying to kill me.

I try not to think about what I’m doing, who I’m killing. Burying the thoughts under the screams and making them incoherent is easier than acknowledging the lives I take. I scramble forward and put my boot on his chest, pinning him down to slit his throat.


I add two more tallies in my mind to document their deaths. Five thousand twenty-four. 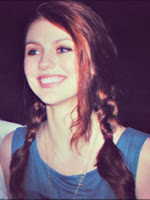 Erica Crouch is from the always colorful city of Baltimore. Currently, she is studying English and Creative Writing with a specialization in Fiction at Southern New Hampshire University. She is the cofounder and head of editorial services at Patchwork Press. Her debut novel, Ignite, was published June 2013. The e-novella sequel, Entice, is due November 2013, and the last book in the series, Incite, is expected Spring of 2014. Along with the YA series Ignite, she is working on publishing a New Adult series, titled the Undying series, with the first installment, Cut, due 2014. When Erica isn’t writing, she’s reading an overwhelming stack of books, watching an obscene amount of Netflix, and procrastinating.