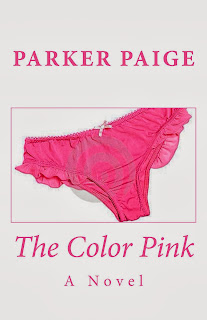 The Color Pink
By Parker Paige
Publication date: September 14, 2013
Genre: Romance
Source: I received an ecopy of this book, as part of a blog tour, in exchange for my honest review.

That is the question Summer Jones intends to answer.

In her early thirties, Summer Jones thought that she had found the perfect man, the man she planned to marry until she learned that he still had feelings for his first love. Now, at age thirty-five, Summer is ready to fall in love again. After she hears that wearing the color pink can attract true love, she sets out to do just that--and attracts more than just true love.

Follow Summer as she journeys into the world of color magic and find out how she uses that magic to help her choose between one man from her past and another man who is destined to become her future.

This romantic drama serves up something fun and sexy, proving that the road to love can be paved with many painful lessons and  memorable moments. It’s a story about paying attention to your past so that you don’t always have to repeat it.

Hmm, what to say about The Color Pink. Well, I really wanted to like this book but it did not work for me. That's not to say it's not written well or that you or your friend won't like it. It simply wasn't my thing. The novel incorporates many elements of New Age practices, such as magic colors, magic rocks, and many New Age-style self-help books. While this was interesting, it's a topic I don't have much experience with or real knowledge of. So I had a hard time connecting with this part of the story, which, in turn, made it hard to connect with the main character. The entire story revolves around love - finding it, keeping it, and the role of new age ideas in the search.

Summer Jones is a 35 year old writer. She's been single for quite awhile now after having her heart broken by an emotionally unavailable man. But she has decided that it's time she move on. Her friend, Sarah Jane, sets her up with an attorney, Morgan Moran, from the law office where she works. Before Summer can begin things with Morgan, she runs into her ex, John. And here, trouble ensues.

Summer's search for love is a story that should have resonated with me. However, Summer annoyed me. A lot. Her inability to make a decision and her vacillation between Morgan and John became infuriating. She couldn't seem to make up her mind and kept looking for answers in all the wrong places, in my opinion. She was implementing the use of items to attract what she wanted, only to question what she received. Honestly, I think I may have been more forgiving of Summer's behavior had it not been for her age. She's 35. She seemed to have it together in every other aspect of her life. But she treated Morgan so poorly and I wanted to shake her.

There were several other characters in the book. Sarah Jane, Summer's best friend, was a fairly one-dimensional character. I really wished she'd have told Summer what she truly though of her actions. John, the ex-boyfriend, was a complete ass. And then there's Morgan. Morgan was a saint. Truly. Or an idiot, depending on your perspective, I suppose. He's my favorite character in this book, though. His capacity for love and forgiveness was inspiring. He'd experienced a tragedy in his life and yet he was open to loving again.

The story is told in first person narrative. I think the style prevented the characters from developing much depth. Also, the dialog was stilted. The writing was okay and the pacing was fine - I just spent most of the story irritated with Summer.

Okay, this really isn't a bad story - it simply wasn't for me. Someone familiar with New Age thinking might completely connect with Summer. And my not connecting with this story doesn't mean I wouldn't read Ms. Paige again.

Parker Paige has been writing fiction for several years with a passion for creating eccentric characters. She is fascinated with true stories and for that reason, she is drawn to the network Investigation Discovery like a drug. She is the author of “Whitley and Austin” and "The Color Pink." She is not completely insane, maybe just a little bit crazy. She lives in Los Angeles. Contact her at parkerpaige86@yahoo.com.