Hey y'all! I recently read about a book that made me curious and made me giggle. :) So I'm thrilled to be spotlighting said book, Getting Rooted in New Zealand, and sharing my interview with its author, Jamie Baywood. 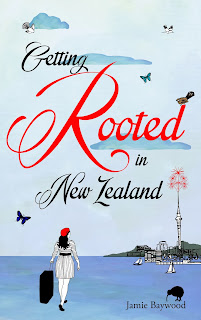 Synopsis
Craving change and lacking logic, at 26, Jamie, a cute and quirky Californian, impulsively moves to New Zealand to avoid dating after reading that the country's population has 100,000 fewer men. In her journal, she captures a hysterically honest look at herself, her past and her new wonderfully weird world filled with curious characters and slapstick situations in unbelievably bizarre jobs. It takes a zany jaunt to the end of the Earth and a serendipitous meeting with a fellow traveler before Jamie learns what it really means to get rooted.

**What Readers are Saying**
“I read this book in one night over four hours. I couldn't put it down. It was so, so entertaining. I laughed out loud on numerous occasions - comedy highlights include brain poisoning from complications over a hair perm, eating stale sunflower seeds and the multitude of accent-related mistakes. Jamie is a lovely, endearing protagonist and I can guarantee you'll fall in love with her. A must read for anyone moving to New Zealand. Or anyone moving anyway for that matter.” (5 out of 5 stars) Thomas Sainsbury (Amazon Customer Reviews)

“Getting Rooted in New Zealand is a diary of a California girl's introduction to a completely different life experience in a new country and never has the phrase `stranger in a strange land' been more relevant than in reading her intriguing and often insightful diary entries! Her observations about both culture and language are a wonderful mix of observation about one person's reaction to the differences that make up the wonderful human race and the minutiae of daily living. I'll be looking forward to seeing if Jamie produces another book about her experiences of coming to live in the UK.” (4 out of 5 stars) Linda Parkinson-Hardman (Amazon
Customer Reviews)

"I've got this book and finished read it all so quickly, because I couldn't stop reading it. it's just so hilarious!! I can't wait to read her next book. I highly recommend to read this book for everybody. I absolutely loved it!!" (5 out of 5 stars) S Halls (Amazon Customer Reviews)

“This book is perfect for travel-reading! It's light, in small sections (as a diary), totally hilarious and also quite amazing. So many crazy experiences Jamie Baywood had in one year, some wonderful and some truly horrific, all taken together adds up to fruitful reading indeed. This book is like a rough diamond - I look forward to reading future novels as Jamie becomes more and more polished through life's experiences” (5 out of 5 stars) Anna H(Amazon Customer Reviews)

“Giggle Worthy... It is difficult to write so openly about your life as you have and I found myself keenly reading to see what happened next. All your adventures with those crazy people sounded so dreadful, but provided such amusement in the way you have represented them. You make no real judgment on any person and I can tell that while you respect them as humans, you don't put up with bad behaviour, so that's an inspiration in itself” (4 out of 5 stars.) O. Dale (Amazon Customer Reviews)

It was always my dream to live abroad when I was growing up in California. For the past three years, I’ve been disassembling and reassembling my life by moving to different countries. I’ve lived in five countries now America, American Samoa, New Zealand, Scotland and now England.

What made you decide to write this book?

I consider myself an accidental author. I didn’t go to New Zealand with the intentions of writing a book about my experiences there. I had funny experiences that I had trouble believing were true. I wrote the stories down to stay sane. I wrote situations down that were happening around me and shared them with friends. The stories made people laugh so I decided to organize the stories into a book and publish in the hopes to make others laugh too.

Why were you avoiding dating?

I know it sounds like a crazy reason, but I needed a serious change in my life and felt I needed to leave the country to do so. I started dating my first boyfriend when we were fourteen and the relationship ended when I was twenty-three. I had never dumped someone and didn’t have the life skills to do so. Between ages twenty-three and twenty-six, I would only date guys I knew I could dump easily.

Not surprisingly, only dating guys with clear and abundant flaws that were easy to dump, created a lot of chaos and drama in my life.

When I was twenty-four, I had my second boyfriend who I call Hank, in real life his named rhymed with Hank. Hank had a drug dealer that sincerely went by the name Stank. I took Hank to rehab,
after that I had a string of crazy suitors and ex’s. If you had Hank and Stank in your life, what other choice do you have, but to leave the country and become an author?

By the age of twenty-six, I was actually much happier being alone than dating, but I was completely bombarded by guys trying to date me. I read in a New Zealand tour book that the country’s population has 100,000 fewer men than women. I wanted to have some me time and an adventure. New Zealand seemed like a good place to do so.

I found a work abroad company that helped young Americans get work visas in New Zealand and Australia. I had been watching a lot of Flight of the Conchords at the time and enjoyed Bret and Jemaine’s sense of humor and accents.

Is there anything in your book not based on real life experiences?

Reading my book would be similar to receiving emails from a friend living abroad. I didn’t really come up with the distinct writing style. It’s just how I honestly observed things and described them. I only know how to write my truth. My truth tends to be stranger than fiction.

It would be impossible to write down every single thing that happen to me in New Zealand for over a year and it probably wouldn’t be interesting to read. My book is 100% true. These are 100% my
experiences. I have changed some the names, but not all of individuals and organizations to preserve privacy. Most of the book was written as the events happened; it just took me a few years to work up the nerve to publish. To write my book Getting Rooted In New Zealand, I relied upon my personal journals, e-mails, and memories. In February 2013, I organized my stories into a cohesive narrative. It went through several rounds of editing and then I published in April.

What was your favorite job in New Zealand?

The visa I was on only allowed me to work temporary positions. I worked in a basement, with ex-cons, next to a perverted mime and with a girl that wore her dead dog’s collar around her neck. All of the jobs were mundane office work, but the cubicles were filled with curious characters.

Recently on Twitter, the characters in Getting Rooted in New Zealand are described as, “Wicked. Lots of heroes and villains. It’s a story you can read again and again- it’s laugh out loud shocking in parts and cringe worthy, some office peeps are monsters!” by Colin Mathura-Jeffree, a male model and judge for the TV show New Zealand’s Next Top Model. Colin is one of my favorite characters that I meet in New Zealand.

I had good, bad and weird experiences in New Zealand. I’m grateful for all the people I encountered, heroes and villains, the experiences I had turned me into a writer.

I was very lucky in New Zealand to meet a lot of talented people outside of work. I had the opportunity to write and perform for Thomas Sainsbury the most prolific playwright in New Zealand. I performed a monologue about my jobs in the Basement Theatre in Auckland.

What project are you working on now?

Self-publishing is one person taking on all of the responsibilities typically held by teams of people in traditional publishing companies. It has been a steep learning curve. I’ve designed, published and have been marketing Getting Rooted in New Zealand.

I am currently booking meet the author events at libraries and book clubs throughout England and Wales between now and June 2014. If you are living in the UK and would like me to come to your library or book club email me at jamiebaywood@gmail.com. All of my events are listed on my Facebook: https://www.facebook.com/jamiebaywood/events

In my free time I like to do yoga, pilates and run. I also practice Nichiren Buddhism which involves chanting Nam Myoho Renge Kyo in the morning and in the evening. It’s my way of centring myself and focusing on my determinations.

I plan to divide my books by the countries I’ve lived in. My next book will be about attempting to settle in Scotland. I plan to publish it late 2014.

Is there anything that you would like to say to your readers and fans?

I love making people laugh more than anything else. I love hearing from readers that my book is making people laugh out loud. The hardest part has been when people don’t understand my humour. I have been in a lot of situations where I had two choices: laugh or cry. I’ve chosen to laugh. I write my experiences from a purely personal standpoint. Compared to other travellers who worked abroad in New Zealand my experiences have been very unusual. I would highly recommend everyone goes to New Zealand to experience their own adventure.

I think readers need to remember this is the dairy of a young, hormonal and confused twenty-something, this is not a travel guide to New Zealand. I am sincerely appreciative of everyone that has read Getting Rooted in New Zealand. I’m absolutely grateful that readers are enjoying the book and reviewing it positively. I love making people laugh. I hope you enjoy Getting Rooted in New
Zealand!

Jamie Baywood grew up in Petaluma, California. In 2010, she made the most impulsive decision of her life by moving to New Zealand. Getting Rooted in New Zealand is her first book about her experiences living there. Jamie is now married and living happily ever after in the United Kingdom. She is working on her second book.