Welcome to my stop on the blog tour for Attempting Elizabeth by Jessica Grey. My stop includes all the details you need for the book, my review, and a giveaway.

One lucky commenter will win an ecopy of Attempting Elizabeth. This giveaway is open internationally, ends November 12th. The winner will be chosen randomly. To enter, simply leave a comment telling me whether or not you're an Austen fan. :)

The tour is presented by Xpresso Book Tours. To check out all the reviews on the tour, click here. 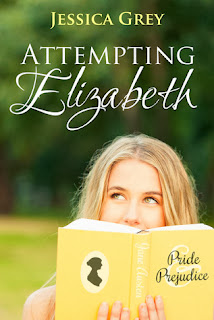 Synopsis:
Kelsey Edmundson is a geek and proud of it. She makes no secret of her love for TV, movies, and, most especially, books. After a bad breakup, she retreats into her favorite novel, Pride and Prejudice, wishing she had some of the wit and spirit of Elizabeth Bennett.

After a particularly gaffe-filled evening around Mark, Kelsey is in desperate need of inspiration from Jane Austen. She falls asleep reading Darcy’s letter to Lizzy and awakens to find herself in an unfamiliar place that looks and sounds suspiciously like her favorite book. Has she somehow been transported into Pride and Prejudice, or is it just a dream?

As Kelsey tries to discover what’s happening to her, she must also discover her own heart. Is Mark Barnes destined to be her Mr. Darcy? In the end, she must decide whether attempting to become Elizabeth is worth the risk or if being Kelsey Edmundson is enough.

Kelsey Edmundson is kinda nerdy when it comes to pop culture. She's a Star Wars fangirl, as well as a geek about action movies and literature. She is an English Lit grad student, focusing on the Regency period. It's no real shock that she'd be an Austen fan. Nor is it shocking she'd turn to Austen, and her favorite heroine, Elizabeth Bennet, when she's feeling awkward and in need of some of Elizabeth's spirit. A few months after suffering a humiliating breakup, Kelsey meets Mark Barnes. For some reason, she always says or does the wrong things around him. Although Mark might be a worthy beau, Kelsey feels as though she always ends up with the rakes when it comes to relationships. She wishes she were more like Elizabeth Bennet, witty and confident. Kelsey decides it's time to stop her habit of always falling for the Wickhams in the world and finally find her Mr. Darcy. Along the way, she just might learn something about the merits of being yourself.

Much of the novel is spent 'in' the pages of Pride & Prejudice. I don't think you'll be lost if you've not read it, but it definitely adds to the pleasure of the novel, if you have. I don't want to go into the hows and whys of the book because it would ruin the experience. But I will say that I wouldn't mind Kelsey's unique ability to 'jump' into her favorite novel. Also, I truly enjoyed seeing Kelsey's transformation, with a little help from Elizabeth Bennett, from awkward geek-girl to confident young woman.

Honestly, lit lovers and Austen fans should rejoice! Ms. Grey does an excellent job of blending pop culture references, movie trivia and literature references, along with Pride & Prejudice. I'll admit that I enjoyed all the P&P scenes. I delighted in the descriptions of the 'off-screen' scenes Ms. Grey included. I enjoyed the analysis she did of the book, and where characters had turning points in the development. And I loved the commentary on the scenes and characters Kelsey provided, with the inside knowledge of someone intimately familiar with the story.

Again, if you've not read P&P, certain elements may be lost to you, but you'll still find the overall story enjoyable. Attempting Elizabeth is entertaining, well-written, and well paced...except for the ending. There were a few facets of the ending that I felt were rushed. But the story is original in it's navigating around the Pride & Prejudice story and it is a lot of fun.

"I was cruising, at a very high rate of speed, toward a complete Austen fangirlmeltdown." Loc 825, eARC

"Haven't you ever read Pride and Prejudice? I asked, horrified.Kelsey, I'm a guy." Loc 2982, eARC

**I received an eARC of this book, as part of the tour, in exchange for an honest review. 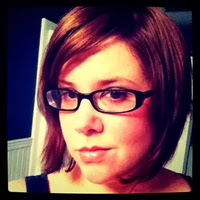 Jessica Grey is an author, fairytale believer, baseball lover, and recovering Star Wars fangirl. A life-long Californian, she now lives in Montana with her husband and two children where she spends her time writing, perfecting the fine art of preschooler-wrangling, and drinking way too much caffeine.

Posted by Bookworm Brandee at 6:24 AM