I'm thrilled to be a part of the promotional event for Paige James' Teaching Willow: Session One. If y'all missed my review of this first installment, you can read it here. I have some of Paige's favorite quotes for y'all and TWO giveaways.

This Promotional Event is presented by Wordsmith Publicity. 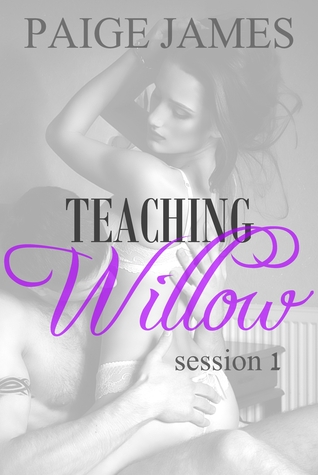 Synopsis
My name is Willow Masters. I'm a senior in college, I'm smart and I keep to myself. I haven't had an "incident" in years. What all of these facts have in common is that none of them made any difference when it came to Ebon Daniels.

He started out as my sister's date. I was instantly infatuated, but had no plans to do anything about it. I even managed to keep my feelings hidden when he took over my Modernist Literature class for the semester. The problems didn't start until my sister took pages from my book - literal pages from a book I was writing - and gave them to the one person never intended to see them. That's the the lies started. That's also when I saw an opportunity to make my only dream become a reality.

And nothing will ever be the same again.

How could one like spark a wildfire that burned down everything in its path? How could it get me all I ever wanted and then cost me everything that ever mattered?

It doesn't seem possible, but it is. It's possibly, it's true and it's tragic. In my book, there is a happy ending, but I don't know if my life will have the same outcome.

My name is Willow Masters and this is the story of how falling in love with my teacher nearly destroyed both of our lives.

**Teaching Willow: Session One is ONLY 99 cents**


Here,  Paige share some of her favorite quotes from Teaching Willow: Session One and why they're her favorites.


“That’s Ebon Daniels in a nutshell. He’s like a drug. And I’m hopelessly addicted.”-- I love this one because throughout the series, this theme is reinforced. Willow functions very similarly to an addict. She doesn’t want to give up her “drug”, doesn’t really want to stop, no matter how out of hand it gets or how dangerous it becomes.

“But more than that, there’s just something about her, something innocently provocative that draws me to her like frozen hands to a warm fire. Or a cold heart to the fires of hell.” --Ebon struggles with his unwanted feelings for Willow. He’s intractably drawn to her on the one hand, but on the other hand he resists her because he feels that his desire for her makes him a terrible person.

“I’ll do the right thing. After tonight.”-- Both Ebon and Willow struggle with doing what’s right versus what they want. If you’ve ever wanted something SO, SO badly, but you’ve known that, for
whatever reason it’s wrong to have it (or to even want it) then you’ll know what this battle feels like. You might even know what it feels like to lose this battle.

“Then I want to know it. All of it. I want to know the girl who feels that way.”—I love this because Ebon is thinking of Willow even as he says it, secretly hoping that maybe he’ll find her in her sister.

“She’s different than the girl you know. I keep that girl hidden, almost like she’s someone else. But if you want the real me, I’ll give her to you.”-- Willow sees an opening to reveal her true self to Ebon in a somewhat consequence-free manner and, although not the way she’d dreamed of sharing her heart with him, she’s willing to do it if it means getting even a small piece of Ebon.

“Yes. I want her. I want her bad,” he says before he softly commands, “Give her to me.” -- This is Ebon’s urgency, his insatiable hunger, confessed.

“Nnnnh,” he grunts in my ear before whispering, “you’ll feel me tomorrow, won’t you?” He pulls out and rams into me again. “You’ll feel sore and achy. You’ll feel it when you walk. And you’ll think of my cock a million times before lunch, won’t you?”—I love that Ebon likes the thought of sort of “marking” her, that he will affect her in such a way that she won’t be able to stop thinking about him and what he’s doing to her.

“Unfortunately, the less able I am to satisfy my desire, the more it haunts me, the more powerful it becomes. From innocent to fascinating, from curious to ravenous.”-- I think this sums up so much of the story. Wanting what you can’t have and then letting the desire for it eat away at you until it’s nearly an obsession.

“How is it possible to feel such conflict? Such soul-singing ecstasy on the one hand and such heart-wrenching agony on the other?”-- I had to add this one because it so sharply defines what is going on within Willow, how torturous it is for her.

My name is Paige James. I'm a fairly shy bookworm and lover of all things romantic and steamy. I'm a wife, a daughter, a sister, a friend, a drinker of wine, an animal advocate (even the ones that look like rodents) and a spinner of tales. Thank you for taking a chance on my work. You're making this working girl's dream come true.