I'm happy to be a part of the blitz for Laurie Olerich's Broken Souls. Below you'll find information about Broken Souls and the Primani series. There is also a fabulous giveaway! 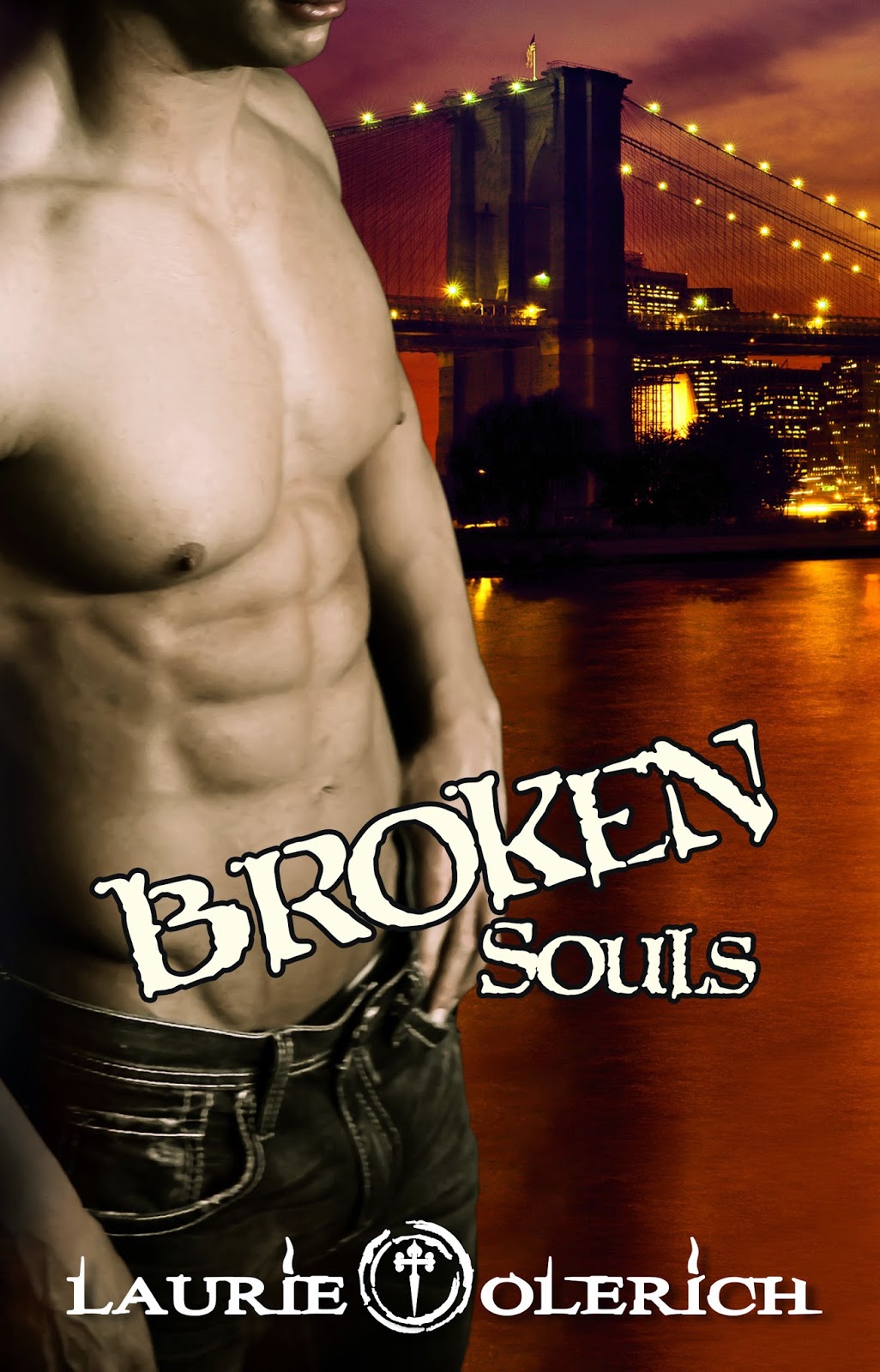 This is the first standalone book in the Primani series. It’s a dark romantic suspense that layers a decades-old murder with chilling demon possession on top of two broken people who must somehow heal wounds too deep to see the light of day.
Stalked by evil... Psychic Rori Austin’s life is over. She just doesn’t know it yet. Suffering from recurring nightmares and terrifying fugues, she’s hanging on by a thread. When she blacks out and wakes up in 1969, she knows she’s out of control. Broke and alone in the city that never sleeps, she’s desperate to find someone who can hold back the darkness in her mind. When gorgeous Declan shows up out of nowhere, she’s thrilled until he starts asking questions she has no intention of answering.
Haunted by guilt... Declan Manning is a ruthless killer and a renowned healer. Demons fear him. Humans love him. Life is good. The last thing he needs is a human woman. After saving Rori’s life, he walks away but can’t forget the fear in her exotic eyes. It haunts him, dredging up memories better left buried deep. Intrigued by her secrets, he uncovers the horrifying truth: She’s marked for Hell, and her time is almost up.
Amazon – Barnes & Noble – iBooks – Smashwords
Add Broken Souls to your Goodreads list!
SPECIAL OFFER:
The first book in the series, Primani, is currently FREE!
Amazon – Barnes & Noble – iBooks – Smashwords

Moving carefully so he wouldn’t startle her, he pulled the shirt over his head. Turning to the side, he dropped his eyes over his shoulder. At his nod, she reached for him. Slowly, softly, she explored him with feathery strokes that tickled yet sent his blood racing.
“Go ahead, darlin’. Look. Touch. Find your answers.”
Rori was treading on shaky ground, she knew that. He was beautiful. Perfect. His face was like a painting, a sculpture. The hard planes could seem cruel, but right now were softened by his emotions. Love? Patience? She didn’t know, but she knew one thing for sure. He wasn’t trying to hide now. He’d taken his shirt off, and she’d lost the use of her vocal chords. He was beautifully made; muscular without being massively huge, golden skin that begged for kisses… he turned so she could see him, and she froze. What would she do if he had wings sprouting from his shoulders?
“No wings?”
Grinning like a naughty little boy, he shook his head. “Sorry. No wings.” He captured her roaming hand and kissed it. “I have other mad skills though if you’d like me to demonstrate. For instance, I can make you hot.”
He placed her hands on his shoulders and busted out laughing when she snatched them back with a horrified gasp. What the hell? He was glowing! The harder he laughed, the more obvious the light became. She was trying to put some distance between them, but he wouldn’t let her. Instead, he reclaimed her hands and forced them flat against his chest.
He scolded, “Uh-uh. You wanted answers. Man up and get them. The light is my saol. It’s our life force, technically. You might consider it the source of my powers. You have one too; but yours isn’t strong like mine is. Yours is human.” The teasing smile vanished. “Mine isn’t. Anymore.”
He wasn’t human? This was getting better and better! She seriously needed to put some space between them. She couldn’t think straight.
He pressed her hand harder against his chest. “Do you feel that? That’s my heart beating just like yours does. Don’t be afraid of me, Rori. I’m here to protect you. It’s what I do. I tried to tell you that before, but you didn’t want to trust me then. Do you trust me now?”
That was a good question. Did she?
She studied the trees in the distance while she considered her answer. After all of the crazy things that had happened in the past few months, she had to admit he’d been there for her without asking for payment. Strangely enough, she didn’t think he was insane anymore. “I do.”
“I’m sensing a ‘but’.”
He was really, really hard to resist. She brushed his bangs back from his eyes. His mouth curled into a lopsided, sexy as all hell grin. The impact slammed all the way to her toes.
“You could melt butter with that smile. How do we mere mortals resist you?”
Flushing an adorable shade of pink, he choked on his snappy comeback before clamping his lips together in a line. Was he embarrassed? How cute was that? Grumbling under his breath, he reached for his shirt, and she shocked them both by stopping him.
“Wait! I want to look at you.” Did I say that out loud? Crap.
He shot her an incredulous look before dropping the shirt and pushing gracefully to his feet. He moved so fast she scooted backwards with a girly cry of alarm. The grin he wore this time was all heat, no humor. Slow, sexy… forget butter, her entire body might combust. Before she could squeak out a protest, he unsnapped his jeans and dropped them in a pile. Kicking out of them in a movement that was so smoothly done he must’ve practiced it, he hauled her upright with her mouth hanging open.
Not an ounce of material in sight.
“Uh… uh, Dec… I’m not sure--” She kept her eyes pasted on his chest. His muscles were nicely shaped, hard, tanned... flat nipples begged for a kiss.
Oh, yeah, he certainly looked human!
He stood in full naked glory, daring her to look lower. He gave her that sexy grin again. She backed up. He stalked forward until her back came up against the granite boulder. His bare chest brushed her breasts. Something hot and velvety brushed her belly. With her heartbeat pounding in her ears, she swallowed hard and placed her hands on his forearms. The hard muscle blazed at her touch. He had fine golden hair dusting across skin that she couldn’t resist caressing. Soft…
“Admit it. You wanted to know if I had all the correct equipment.” He was teasing her. She could tell by the humor in his voice, but he was so right. At that moment, she wanted to look down more than anything in the world.
He turned around and said over his shoulder, “I’ve been told I have a nice ass. What do you think?”
“Dec! You’re horrible! I am not looking at your ass!” But she couldn’t resist bursting into giggles at the lift of his eyebrows.
“Are you sure? I can stand here all day.”
“I’m sure you can.” A wistful sigh slipped out when she snagged a peek at his butt. Yum!
He was beside her so fast he was a blur. Lifting her chin, he winked before dropping a sweet kiss on her open mouth. “Don’t be so obvious. There’s time for us to get naked and hump like bunnies later. Right now, you need to recover your strength so you can keep up.”
With that he stepped into his jeans while she focused on his hands. Capable. Smooth. Hard. Those hands had nursed her, held her. How would they feel making love to her? 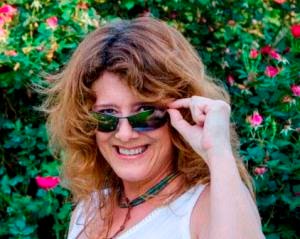 Laurie Olerich is the author of the urban fantasy romance series Primani. She loves to create guilty pleasures full of exciting locations, roller coaster action, strong, quirky heroines, and steaming hot heroes who’ll raise the temperature in any room you’re in! Paranormal romance? Check! Urban fantasy? Check! Romantic suspense? Check! Her Primani series combines the best of the three. When not plotting, writing, or fantasizing about her next hero, she’s planning parties, traveling the world, and spending lazy nights with her son, her Dal pals, and friends. Laurie spent most of her life in the Northeastern United States and in Germany. She now lives in San Antonio, Texas, with her son and Dalmatian duo, Domino and Rambo. Before throwing caution to the wind and diving into a writing career, Laurie dedicated 20 years to a career spent around men with guns and cool toys...this explains her obsession with both!
Website – Twitter – Facebook – Pinterest – Goodreads