Welcome to my stop on the blog tour for Madelynne Ellis' All Fired Up. My stop includes all the information on the book, my review, and a giveaway. 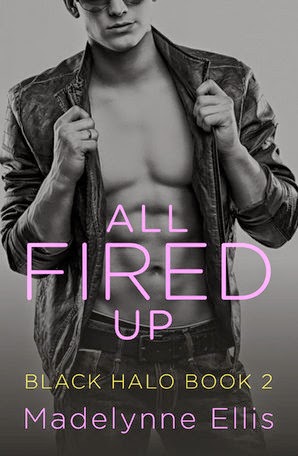 ALL FIRED UP (Black Halo #2)
by Madelynne Ellis
Contemporary/Erotic Romance
Published by Mischief on December 18th, 2014

All Fired Up is the follow-up to New York Times & USA Today Bestselling Author Madelynne Ellis' scorching rock star romance novel, All Night Long, and is the fourth novel about the band Black Halo.
Ginny Walters always knew her weakness for bad boys would get her into trouble. Her one night stand with Black Halo's lead guitarist, Ash Gore, was only supposed to be a fun, not the prelude to the sort of relationship that'd scorch holes in her heart as well as her bed sheets. She'd be the happiest woman in the world if Ash wasn't so determined to keep their connection off radar.
Ash Gore knows girlfriends are bad news for bands, which is why he's resolved to keep his attachment to Ginny a secret. He and the guys have enough on their stages as they try to piece themselves back together after the band's split. But when new drummer, Iain Willows, starts taking an active interest in Ginny, tensions quickly mount. Soon, Ash is not only at risk of losing Ginny, but everything he holds dearest--including life itself.
Amazon UK – Amazon US – Barnes & Noble – GooglePlay – Kobo – iBooks
Add All Fired Up to your Goodreads list!
Suggested reading order:
Come Undone (Rock Hard #1)
All Night Long (Black Halo #1)
Remastered (Black Halo #1.5)
Come Together (Rock Hard #2)
All Fired Up (Black Halo #2)

I like to imagine what it might have been like to date a rock star. With Ash and Ginny, Ms. Ellis portrays the pros and cons, the ups and downs, realistically. There was plenty of steam which was expected since Ash and Ginny throw sparks with just a look. Ms. Ellis also dove a little deeper into the band's interpersonal dynamics - especially Spook's role. <-- I'm hoping he gets his own book *hint hint* And Ms. Ellis threw in a little mystery for some added excitement and suspense. Yeah, All Fired Up had me, well, all fired up!

Ash and Ginny are now dating but with the band on shaky ground and about to embark on a tour, Ash wants to keep their relationship on the down-low. At least that's what he's telling himself and Ginny. Ginny's okay with the arrangement, at first. But as feelings start to grow, the secrecy wears thin.

The two are my favorite couple from both series. (there are only 2 so far) They fit together well. Ash wears his leathers, guy-liner, and guitar as a shield - all to protect his vulnerable heart from further trampling. He did open up to Ginny though, showed her pieces of himself her preferred to keep buried in an effort to move forward. I admired him for that. Ginny is blunt, independent, and strong-willed. I appreciated that she was unapologetic for her views. And I liked that she stood up for and fought for what she wanted.

There's band drama, naturally. And this is where we get better acquainted with Spook as well as getting to puzzle out the mystery. It was all very exciting and entertaining. The story did end on a tiny cliffhanger but not one I can't live with. Besides, All Right Now isn't too far away.

Madelynne Ellis is a New York Times & USA Today Bestselling author of erotic romance. Her novels and short stories have been published by a variety of houses including HarperCollins, Harlequin and Random House, and have been translated into several languages. She lives in the UK, not far from the Welsh border with her partner of 20 + years, their two adorable children, and a crazy cavachon puppy. Madelynne drinks decaf out of preference, and has a healthy obsession with a certain Japanese rock star. Her aim is to deliver scorching, character-driven stories that enchant, torment and don’t shy from darker aspects of life.
Website – Blog – Twitter – Facebook Author PageFacebook Readers Retreat – Goodreads - Newsletter