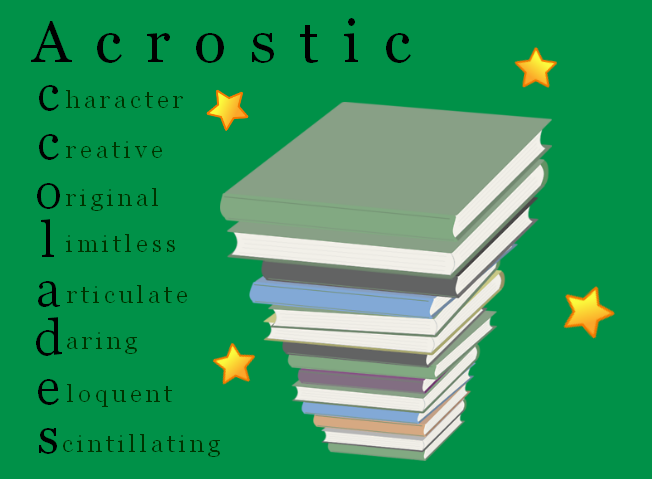 Welcome to Acrostic Accolades, where I challenge you to write an acrostic poem to shower accolades on YOUR favorite character, book, series, or author!

To participate, you must:


That's it! This is a chance for you to be creative in showing some love to favorite books you've read. I can't wait to see what y'all come up with!

To reward your efforts, I'm offering a giveaway for a $5 GC to Amazon or B&N.

So, to get y'all excited and your creative juices flowing, I've written an acrostic. It's for one of my favorite series - which I read in it's entirety in 2014...Rock Chick by Kristen Ashley. Enjoy!


What IS a Rock Chick

O bliging, a Rock Chick is always at the ready to help a friend in need, whether it be to lend a pair of shoes, talk through relationship issues, plan a wedding, deal with druglords, or provide rescue from a psychotic ex-boyfriend

C lassy; whether rockin' a pair of jeans with flip-flops or Juicy couture, a Rock Chick always looks her best

K een, a Rock Chick needs to always be 'in the know', which often causes problems that need attention from her fellow Rock Chicks and/or the Hot Bunch Brigade


C onvivial; a Rock Chick knows how to celebrate with her friends, and knows that any party worth its salt serves cashews.

H ardheaded, a Rock Chick has been known to take a stand and dig in her heels...often negated by her Hot Bunch Guy

C ourageous in the face of danger, a Rock Chick knows how to throw a punch and/or operate a stun gun

K ickass, a Rock Chick can take care of herself (usually) but always has the other Rock Chicks at her back - nobody bar brawls like the Rock Chicks