Resisting the Bad Boy sounds like a really fun read! Check out the blurb and the excerpt below. Also, make sure to enter the giveaway. Violet is giving away a $10 Amazon Gift Card! :) 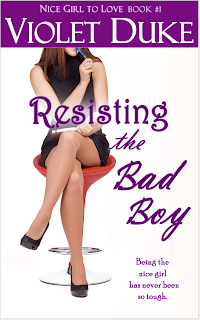 Abby Bartlett is the quintessential nice girl. Between teaching, volunteering, completing her PhD, and helping her best friend raise his daughter, Abby never gets the chance to be anything but nice. That is, until the all-wrong-for-her man she’s only ever known from afar starts daring her to simply take that chance for herself.  His sage advice?  Try something wild and fast.

An unbridled, hotshot attorney with a not-so-little black book, Connor Sullivan has earned himself quite the bad boy reputation.  But in his defense, he’s a very conscientious one. He knows far too well that sometimes in life, love isn’t enough…or worse, not even a factor at all.  To avoid that misery—and repel the drama—Connor always makes his one and only rule crystal clear right from the start.  Absolutely nothing more than a month.

Turns out, a whole lot can happen in one month.


EXCERPT:
“Why you little—”
Connor launched at Abby as she shrieked out in laughter and tried ducking around him to make for the door.  Snatching her around the waist, he hoisted her cackling body over his shoulder and upended her back onto the bed.  “You set me up.”
Now unliddable, her giggles effervesced, giving zero credence to her perfectly scandalized denials.  He trapped her under him and buried his grin against the curve of her neck, feeling disproportionately victorious at the gasp she couldn’t contain when he skimmed his lips over her collarbone.
The woman was getting to him.  This time, when his lips found her soft skin again, it was with purpose.  “You planted that wicked little bag-o-fun there for me to find, admit it.”
She gave an Oscar-worthy gasp at the accusation. “What?  What possible reason would I have had to do that?”
“To drive me up the wall?  Send me bursting through my zipper?”  He nipped at her earlobe playfully.  “Though I guess I should be flattered to be the reason you bought all that stuff.”
The cutest derisive snort he’d ever heard shot out of her like a torpedo with impeccable aim.  “Breaking news, Connor: scientists have in fact discovered that the earth doesn’t revolve around you.  Women buy toys for themselves all the time.”
He nearly bit off his tongue to avoid even thinking about Abby having any sort of toy-based fun.  “I still call foul.  When you and I agreed to this who’ll-beg-first stint, you didn’t say you’d be weaponizing your attacks.”
“Weapons?”  She blinked innocently.  “You make them sound so sinister.  I’d say they’re more like…private tools.  Survival tools, if you will.  For my time here.  Naturally, you were never meant to see them.”
“Bull.  Next, you’ll tell me the snowflake masquerading as underwear in that bag is worn strictly for comfort.  Hell, I’ve seen more fabric on the teeny doilies in Skylar’s toy tea sets—”
“Aw, I remember those,” she cut in softly with a smile.  “She used to go on and on about how her ‘bestest Uncle Connor’ hosted the fanciest dress-up tea parties.”
“I wore suits,” he clarified gruffly, “and don’t change the subject.  Why buy sexy lingerie if not to have them be seen?”
By me.  He didn’t have to say it out loud, they were both thinking it.  And his ego was celebrating it.
“Easy access,” she eventually answered, straight-faced.
His imagination went nuts.  Picturing Abby wearing the microscopic scrap of white lace he saw earlier for private ‘easy access’ unhinged him.  He shackled her wrists above her head with one hand and began tickling her ribs.  “Another foul.”
“Stop!” she screeched and dissolved into a breathless puddle of mirth.  “Okay, I admit it!  It was a dirty, dirty foul on my part.  You should definitely take a free throw shot.”
He paused, wondering where she was going with this.
She pointed to the trash can.  “There’s the basket; my new panties can be the ball…since yours are clearly in a twist.”
Incredulous, he dialed up the tickle torture to merciless.
Her squealing ‘I-take-it-backs’ became unintelligible as she wriggled and squirmed and bucked until soon, he was fairly certain he was suffering more than she was.
Breathing hard, he released her wrists and rolled onto his back beside her.  “You’re planning to drive me completely crazy these next few weeks, aren’t you?”
Limbs all akimbo, head dangling off the bed, she heaved between breaths, “Like you wouldn’t believe.” 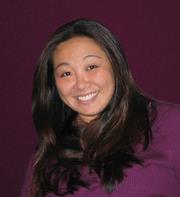 VIOLET DUKE is the pen name for Nina Nakayama, former professor of English Education turned author who now spends her days on the other side of the page writing wickedly fun contemporary romance.  When she’s not catering to the whims of her story characters or feeding her book-a-day reading addiction, she enjoys randomly rearranging the furniture in her house, tackling reno projects with her power tools, cooking ‘special edition’ dishes that laugh in the face of recipes, and trying pretty much anything without reading the directions first.  Nina lives in Hawai‘i with her two cute kids and similarly adorable husband.  Learn more about her and her books at http://www.violetduke.com.

Stop by all the blogs participating in the RESISTING THE BAD BOY book blitz to increase your chances to win.