Hey y'all! As you know from my Good, Bad & Ugly last week, I've been having a J.A. Huss reading fest. I'm not quite finished with the fourth book in the series, Range, which releases on April 1st, but I CANNOT express how very much I LOVE these books and these characters!! Since I'm the "boss" around here, I decided to host my own Fangirling Over J.A. Huss Days!! ;) Today and tomorrow, I'll be posting my reviews of the first two books in the series, Clutch and Fledge. Then next Wednesday and Thursday, I'll post my reviews of books 3, 4, and 4.5, Flight, Range, and Magpie Bridge. AND because I'm now forever a fan of Ms. Huss and I think y'all should be too ;) I'm going to be having a giveaway. So don't miss out on that! 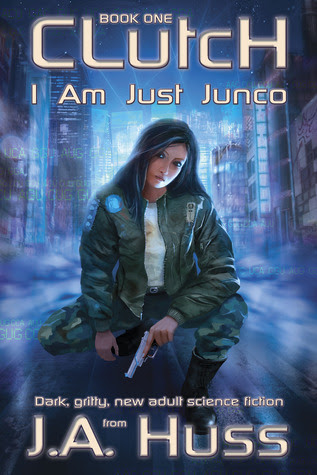 Synopsis from GoodReads:
How long can you lie to yourself before it all comes apart?In 2152 the avian race is on Earth looking for something stolen from them decades ago – their genetics. At the center of the search lies the Rural Republic; a small backwards farming country with high hopes of military domination and a penchant for illegal bioengineering.19 year old Junco Coot is the daughter of the Rural Republic’s ranking commander. She’s the most foul-mouthed, wildly unpredictable and ruthless sniper the Rural Republic has ever trained. But when her father’s death sparks a trip into forbidden places, she triggers events that will change everything she knows to be true.As an elite avian military officer, Tier’s mission is to destroy the bioengineering projects, kill Commander Coot’s daughter, and return home immediately. There’s just one problem. Junco isn’t who she claims to be.With no one to trust, not even herself, Junco must confront the secrets of her past and accept her place in the future, or risk losing herself completely.CONTENT WARNING The I Am Just Junco series is NOT YOUNG ADULT. This series contains foul language and graphic violence.

******************
I had a feeling about this book...a good one. And let me tell you, I was not disappointed! Reading Clutch, I was reading something a little outside my norm BUT the world building and original concepts and mythology that went into this book are incredible! Also, the action, mystery and keep me on the edge of my seat suspense are fantastic. To say that I never saw "that" coming would be an understatement. As would "I love this freaking book!"

Junco is such a unique character...unlike any I've ever met, I think. There's lots of mystery surrounding her throughout the book and the answers are revealed to us in small bits. The END - OMG! Anyway, the entire time I was rooting for Junco, hoping she'd recover her memories, make the right choices. And through it all, I couldn't help but admire her resiliency. She can seemingly handle anything, whether it be a plasma fun blast, a nightdog attack, or finding out the people you thought were your friends are your enemies and the people you thought were your enemies are your friends. She is one kick-ass heroine! She may be a bit bent but she's not broken. She is just Junco...and unapologetic about it!

Tier, the avian who seems to show up at just the right moments to help her out of jams, is a very intriguing character. Junco doesn't know if she should trust him or not but seems to instinctively give him her trust anyway. The secrets and doubts surrounding his role in Junco's present and future had me second guessing myself a lot. But the heat between these two - great tension and heat! Loved it!

Then there's Aren, who Junco has known for most of her life. He's had her trust forever - even if he seemingly abandoned her. Once again, I found myself wondering if I (and Junco) should trust him and his knowledge of the events currently hounding Junco.

I LOVED the writing in this book! Like I said, the world building and mythology incorporated in the story are amazing. It's set in the future - a future where the world as we know it doesn't exist. And this avian species whose origins are intermingled with humans and a prophecy about those origins have humans and avians alike in it's grip.

Clutch is also gritty and raw in it's portrayal of deceit and backhandedness within the military and political worlds. And the science in the fiction - ah, well done! The descriptions of genetic altering/mutating and all the futuristic gadgets is impressive!

I don't want to say so much that I ruin the experience of reading Clutch. I will reiterate how fantastic I think it is! I had a hard time putting it down. J.A. Huss has a forever fan in me! :)

Posted by Bookworm Brandee at 9:18 AM