Hey y'all! It's Day 4 of my Fangirling Over J.A. Huss event. Welcome to Junco's World! If you aren't a card-carrying member of the Junco Fan Club, read on to learn all the reasons why you should be! :) Today's post is my review of Range, the fourth book in the I Am Just Junco series - or I Am Not Junco... I was going to review The Magpie Bridge today as well, but I'm having so much fun with these posts, I decided to have one more day of fangirling. So that review will post tomorrow.

My reviews of the previous books in the series can be read by clicking on their titles below:

Remember to enter to the drawing to win a digital version of an I Am Just Junco book!

Now let's get to the fangirling! 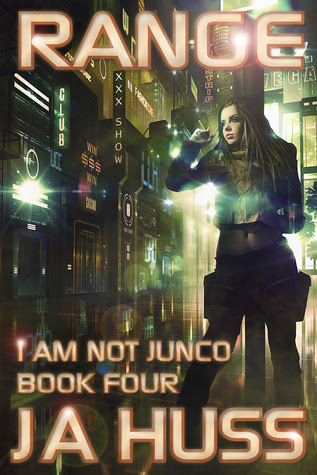 Title: Range
Series: I Am Just Junco/I Am Not Junco #4
Author: J.A. Huss

Synopsis from GoodReads:
Two years have passed since Inanna stole Junco away from Lucan. Two years of unimaginable pain. Two years of isolation, mutilation and torture. Two years of fear and loneliness in a morph tank. And that’s not something you just get over, even if you are psycho-assassin, Junco Coot.Now Junco has to learn to live with the consequences. Her Siblings are suspicious and angry, half her team is dead, Tier is wreaking death and destruction, Lucan is holding his secrets close, and she is spiraling out of control.There is only one partnership that matters anymore – only one person she will trust and take direction from – and only one way out of the Hell she’s been sentenced to.Junco is tired of fighting and death. She’s had enough and this time she means to end it – once and for all.

******************************
Range is exactly what I've come to expect from Ms. Huss' writing. It is extremely well written, has white-knuckle suspense and action, and continues the unique story that is Junco Coot. Range is a bit darker than the previous books, and that's saying something. We get a deeper look into Junco's psyche and quite honestly, it's a rather scary place to see.


"It's so much easier to just do what you're told and besides, this is my one true purpose and you can't be half a killer. You just gotta embrace your inner evil, that's what I think. Just be who you were born to be."

One recurrent theme with Junco is her feeling of loneliness and her desire not to be alone. We witness and many characters have commented on her habit of looking at the stars. Junco explains this,


"They always come back because they are constant. They never leave me, they make their celestial orbit and move through the night, but they are one hundred percent predictable."

The action in Range revolves around Junco and her fight with sanity as well as the End of Days events leading up to the angels arriving and the war that will ensue. I'm not gonna lie - this is some deep shit. Ms. Huss says she likes to keep her readers guessing and asking questions. Well, I'm making attempts to guess where this will go and asking lots of questions...the most pertinent of which being "When do I get to read book 5?!?"

Junco is vulnerable, confused, and lonely in Range. You would be too, if you'd been through even half what this girl has been through. And she's being asked to endure even more. The story line seems fractured with the memories Junco is experiencing and the present. I think this is intentional and works well in portraying Junco's inner turmoil. One observation I've made several times about Junco is how much I admire her resiliency. She seemingly can survive everything thrown her way. So I'd like to say that she's still a bit bent but not broken...but I'm not entirely sure that's true anymore. I'm certainly anxious to learn the outcome.

Posted by Bookworm Brandee at 1:37 AM