Welcome to Day 2 of my Fangirling Over J.A. Huss Days event. Today you can read my review of Fledge, book 2 in the I Am Just Junco series. Don't forget that next Wednesday and Thursday I'll be posting my reviews of the next books in this series as well as having a giveaway!

Now, on to the fangirling... 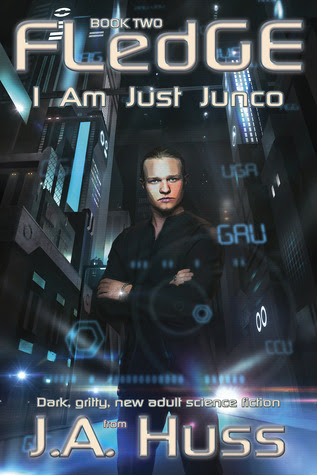 Synopsis from GoodReads:
Well-trained soldier or genetically engineered monster? Junco Coot can’t even remember her trip off Earth; she was too busy being morphed into her new avian body. But reality hits her hard when she wakes up to find her new life is not what she expected. Not even close. Tier is on trial for treason, the avian president wants her dead, her new military team is hostile, her body is being taken over by an illicit AI, and her only friend is a ten-year old throwaway boy.In most places the avian Fledge ritual would be nothing more than mass murder, but here in the capital city of Amelia, it’s called growing up. Junco has two choices: fight to the death to prove her worth, or get sent back to Earth in the hands of her enemies.In a foreign culture and surrounded by people she can’t trust or count on, Junco must find a way to save herself and Tier without losing her immortal soul in the process.CONTENT WARNING - Just like CLUTCH, Book Two has lots of bad language and extreme violence. You've been warned. This series is NOT YOUNG ADULT.

Holy s#it! The action and suspense just got dialed up a few notches in this second installment! Junco is now fully morphed and fully immersed in the avian world. However, Tier is imprisoned and on trial for his transgressions so Junco doesn't have him for guidance. She is an official member of the Aves 039 - Tier's team but she must still prove herself worthy. And to do so, she must pass all the tests presented in the Fledge.

This portion of Junco's story deals mostly with her Fledge and finding her way in her new home. I love that Ms. Huss is once again building a brand new world for me. It's incredible the detail of the avian habitat - and I was equally absorbed in this next chapter of Junco's tale.

Tier isn't as physically present in this book although he's always there. We meet an entirely new cast of characters including all of Tier's teammates as well as the President of the avians, Lucan. And we also meet Junco's fellow fledges...a motley crew of avians who must succeed or die. The fledge process is extremely violent, and Ms. Huss' detail made reading about it visceral.

Junco is, of course, challenged in every possible way - AGAIN. And, again, she rises to meet every challenge in her quest to prove herself AND save Tier. Trust is a huge issue for Junco - who can she trust?

I found this second book just as engrossing as the first. I'm still amazed at how immersed in Junco's story I find myself and it's all due to Ms. Huss' storytelling ability! There are new developments in Junco's journey, new twists and mysteries, and new thrills, shocks and heartbreaks. I am all the more impressed with Junco's resiliency and strength. Even though we meet many characters in this book, I feel this is mostly about Junco's growth and maturity along her path towards fulfillment. And I cannot wait to see what comes next!