I'm excited to be a part of the blitz for Juliana Haygert's Breaking the Reins. I have everything you need to know about the book, an excerpt, and a giveaway!

This blitz is presented by YA Bound Book Tours. 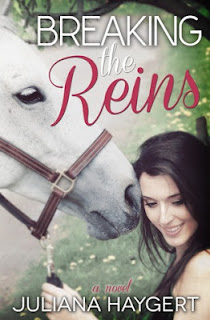 Summary from Goodreads:
Horses, mansions, tea parties, and lies are twenty-year-old Hannah Taylor’s life. To others, her family and her relationship with Eric is perfect. But she knows the truth. She lives it.

After a fire takes her grandma's life and kills her horse, Hannah's immaculate life spirals out of control. Her father disapproves of her decision to run her grandma’s ranch instead of focusing solely on learning the family business; Animal Control brings her Argus, a mistreated horse that she can't turn away even though she's not ready for another horse; and her boyfriend, Eric Bennett, a world famous polo player, becomes possessive and authoritarian. Despite her best efforts to disguise it, Hannah grows wary of him.

Then, Leonardo Fernandes struts onto the polo scene. A cocky rookie with a messy life of his own, he’s drawn to Hannah and isn’t afraid of showing it, even when Eric makes it clear she is his and he’ll do whatever it takes to keep it that way. Hannah suffers for Eric’s jealousy. The abuse only gets worse when Leo steals the title of best polo player in the world from Eric.

But the title isn’t enough for Leo. He wants Hannah too, and she can’t deny her attraction to him either. Somehow, she must find a way to break free from abusive Eric before he breaks every bone in her body.


We exited the stable, and I worked up the nerve to invite him to stay longer, to have dinner with me and talk a little. I opened my mouth, but he spoke first.

“I should get going,” he said, his tone low.

He turned to the path leading to the parking lot, and I caught up with him.

He showed me a lopsided grin. “Are you doing the guy thing? Walking me to my car?”

I shrugged. “It’s my house. I can do whatever I want.”

His smile was gone, and his eyes were serious. “And you want to walk me to my car?”

I returned the stare. “I want to,” I said, not sure where this bold feeling was coming from.

As we approached his car, butterflies assaulted my stomach. What was I doing? I was encouraging him. Perhaps I should stay behind and say goodbye from the path.

I couldn't make up my mind, and then we were standing by his SUV’s door.

Every nerve in my body came alive when he turned around and stepped too close to me, his body hovering inches from mine, his intense eyes on mine. His gaze flicked down to my mouth, and I inhaled a sharp breath.

Groaning, Leo put his hands on my waist, whirled us around, pushed his hard body on mine, and pressed me against his car.

“You said you wouldn’t try anything.”

“I tried to resist,” he said, his voice breathless. “I told you. It’s hard. Especially when I notice you don’t want me to resist. I cannot resist it.”

I put my hands on his chest with every intention of pushing him away, but the muscles of his pecs under my palms caught my breath, and I melted. I was melting, and there was nothing I could do.

“You have no idea how much I want to kiss you right now,” he said, his breath brushing against my lips, and I shivered.

“Please, morena, tell me I can kiss you.” His hand clasped around my nape. “I need to kiss you.”

Intoxicated, I wrapped my arms around his neck and pulled him down to me. I kissed him. Without wasting one millisecond, Leo kissed me back. I felt him relaxing in my arms, as if he had finally won a fight and now could celebrate the victory. He moaned when I entangled my tongue with his. His hand on my neck slid up, his finger entwining in my hair, and his other hand slipped under my tank top and clutched my waist. He took control and changed the rhythm of the kiss, his soft lips slowing down against mine, but his tongue going deeper. It was erotic, and my body was on fire, screaming for his.

New Adult author and contributor at NA Alley blog.
While Juliana Haygert dreams of being Wonder Woman, Buffy, or a blood elf shadow priest, she settles for the less exciting—but equally gratifying—life of a wife, mother, and author. Thousands of miles away from her former home in Brazil, she now resides in Connecticut and spends her days writing about kick-ass heroines and the heroes who drive them crazy.