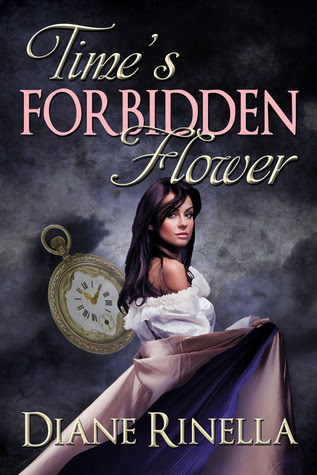 Time's Forbidden Flower
by Diane Rinella
Release Date: August 19, 2013
Source: I received an ecopy from the author in exchange for an honest review.

Synopsis:
An eternity of passion cannot be quelled by society.Once upon a time Donovan assured Lily all of her dreams would come true. But how could he keep the promise of a fairy tale when her truest goals could not involve him, though her deepest desires did?Now, Lily has it all—love, passion, a family, and the career of her dreams—with Christopher. But something is lacking. She and Donovan have spent the last ten years living apart, and the soul mates are eager to reunite. Can Donovan keep his promise to give Lily all she desires, even with Christopher in the way?For Lily and Donovan, the past is a mirror to the future that cannot be shattered.Donovan is convinced Lily has been his love for all eternity. Determined to unravel the past, they embark on a journey to discover where it all began. For centuries Donovan has stolen Lily’s heart while forced to suffer for his love. How much can a soul endure before the breaking point is reached and a monster emerges? Can the demons of the past be combated to pave the way for happiness in the next life? Or has the abuse suffered in this life already turned Donovan hell bound?Time and again, one woman has destroyed their happiness. It’s time to silence her—once and for all.
Ravishingly sinful, witty, and controversial, Time’s Forbidden Flower, the sequel to Love’s Forbidden Flower, is a barrier breaking love story of time unwound.

Time's Forbidden Flower revisits the sibling soul mates, Lily and Donovan. It is years down the road now, with both siblings involved in happy marriages with children and fulfilling careers. However, there is always something amiss - a puzzle piece in each of their lives missing.

Living close to one another for the first time in years, the pull Lily and Donovan feel intensifies. In an attempt to understand dreams and memories of long ago, Donovan asks Lily to undergo past life regression therapy. As a believer in soul mates, I relished in Ms. Rinella's use of this tool in explaining Lily and Donovan's strong connection to one another.

Throughout Time's Forbidden Flower, I admired Lily and Donovan's strength. They were determined to stand by their commitments and do the right thing, even at their own expense. At one point, Lily is ready to give it all up for Donovan, but they both always realize the stakes. And they know in the end, they'll be together.


There were several plot twists and shocking revelations that had me exclaiming loudly. Lana Beckett, Lily and Donovan's mother, continues to be a force to reckon with. She has continually treated Donovan in cruel ways. The depth of her deprivation was startling. I was appalled at her treatment of her children. What I delighted in most was that Ms. Rinella resolved the situation between Lily and Donovan and kept them true to their characters. Although it broke my heart seeing the amount of suffering they endured solely because their souls were born as siblings in this life, I was elated that both were able to have fulfilling family lives. And in the end, Donovan kept all his promises.

Obviously, I adore Ms. Rinella's voice. He writing is fluid and lyrical. And she constructed such a riveting story. Lily and Donovan's is a passionate, poignant and powerful tale of eternal love.

"I remember all you've ever wished, and I'm going to ensure we get everything we've ever desired." --Donovan, Loc 121

"Neither of you have done anything wrong. Honest actions are never wrong." --Christopher, Loc 3085 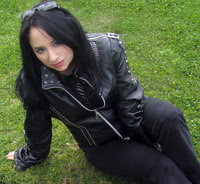 Enjoying San Francisco as a backdrop, the ghosts in Diane’s 150-year old Victorian home augment the chorus in her head. With insomnia as their catalyst, these voices have become multifarious characters that haunt her well into the sun’s crowning hours, refusing to let go until they have manipulated her into succumbing to their whims. Her experiences as an actress, business owner, artisan cake designer, software project  manager, Internet radio disc jockey, vintage rock n’ roll journalist/fan girl, and lover of dark and quirky personalities influence her idiosyncratic writing.