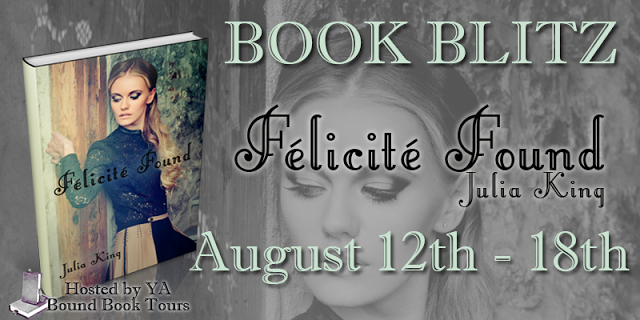 This book...this book sounds so fascinating, y'all. I couldn't resist being a part of the blitz for Julia King's Felicite Found. I have everything y'all need to know about the book, an excerpt AND a giveaway. :)

This blitz is presented by YA Bound Book Tours. 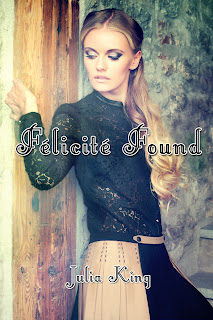 Summary from Goodreads:
Seventeen-year-old Pierre Rousseaux witnesses a young girl take a near fatal plunge off Pont Neuf Bridge into the freezing water of the River Seine in Paris, France. After diving into the racing river himself, he is able to rescue her from a watery death, but only after her head is bashed into the river wall. Upon reviving her from unconsciousness, Pierre realizes she doesn’t remember her past at all.

The girl struggles to recall anything from before she may have tried to commit suicide, not only once but possibly twice. The few glimpses into her life are discovered through dreams that can only suggest her past was horrific and jaded by intense anger.

Her memories may force her to lose everything she has grown to adore, especially the boy she loves more than anything in the world: Pierre.

The girl, Félicité Moreau, must decide if the life she desires is enough to make things from her past right. Pierre struggles to resolve if Félicité means enough to him that he will fight for her, regardless of her past and despite his own personal demons.

“A rush of sweet warmth flooded Félicité for having remembered something about her past. The heaviness in her mind and heart seeped free from her as though it pushed itself from all of her pores. She knew that eventually everything—her memories and knowledge—would come back.

She ached for Pierre and Hélène to know her name. As fast as her legs could carry her, she sped into the living room. Pierre was sound asleep, chest rising and falling in a rhythm that followed his thunderous snores. He was so loud she found it difficult to remember why she had come to see him. However, she couldn’t bear to wake him.

She observed that the light shining through the gap of the curtains came from only the moon. It must be the middle of the night. It was difficult for her to believe that she had slept all day and into the night.

Gazing at Pierre, she noted how handsome he was even in his thunderous slumber. She wanted to touch his skin and the rough stubble of hair growth on his face. His hand that fell from the couch beckoned her to him. She resisted the urge to take it into hers, feel it, relish its rough texture, and press it to her face. Again, she felt as if she had known him for a long time.

Should she wake him to hear his welcoming, deep and vibrating voice?

No, she thought as her euphoria faded. All that was left was a lump in her throat.

Her happy news would have to wait until morning. With one last look at the most kind-natured and loving person in the world, she shuffled her feet back to bed. However, before she fell asleep, she distinctly heard her father’s voice in the room telling her, “Félicité, my daughter, I love you. I love you so much.”

She bounded out of bed like an animal pouncing on its prey and flipped the light switch. Scanning the room, she saw no one in there. She was alone.”

Julia King grew up in a town in the happiest county in Utah. She enjoys reading, music (especially U2), the outdoors, and traveling. She appreciates a good television show. She has quite the sweet tooth. It is common for her to squeal up a storm when she sees a dog. Her favorite breed is beagles, and she longs for the day when she can have one of these furry, adorable friends of her own. And she loves conjuring up stories that swirl sweetly in her mind. Well, until they come to life on the page.