**Review ~ The Cross and the Dragon ~ Kim Rendfeld** 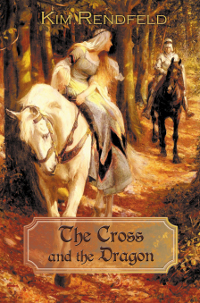 The Cross and the Dragon

Synopsis:
A tale of love in an era of war and blood feuds.Francia, 778: Alda has never forgotten Ganelon's vow of vengeance when she married his rival, Hruodland. Yet the jilted suitor's malice is nothing compared to Alda's premonition of disaster for her beloved, battle-scarred husband.Although the army invading Hispania is the largest ever and King Charles has never lost a war, Alda cannot shake her anxiety. Determined to keep Hruodland from harm, even if it exposes her to danger, Alda gives him a charmed dragon amulet.Is its magic enough to keep Alda's worst fears from coming true--and protect her from Ganelon?Inspired by legend and painstakingly researched, The Cross and the Dragon is a story of tenderness, sacrifice, lies, and revenge in the early years of Charlemagne's reign, told by a fresh, new voice in historical fiction.

The mark of good historical fiction, in my opinion anyway, is the detail. Ms. Rendfeld paid particular attention to detail in The Cross and the Dragon. The result is an epic tale of a warrior and his wife during the medieval ages when Charlemagne ruled.

In The Cross and the Dragon, Ms. Rendfeld took a legend and built a story around it using all the historical detail of the time. There are the politics in the court of King Charles (Charlemagne), battles among the Frankish, the Saxons, the Bretons and others, and even blood feuds between families. These elements are woven around religious beliefs, superstitions and the daily minutiae of life. All these elements combined for a stunning and captivating tale.

Our hero, Hroudland, is a mighty warrior and the prefect of the March of Brittany. He's noble and just, the nephew of the king. And he wins the hand of Alda. He loves her although at times he wonders at her fidelity.

Alda is now one of my favorite heroines of all time. I admire female characters who stand up against social expectations, and Alda does this, usually in colorful fashion. She is cunning and clever, very strong-willed, and speaks her mind. She also loves Hroudland dearly.

Ganelon, our villain, is a spiteful, hateful man with absolutely no redeeming qualities. He's the perfect antagonist. Interestingly, I believe him to be portrayed realistically as a typical noble man of the time. The lengths he goes to for revenge for his family are shocking and prove his wickedness.

Ms. Rendfeld created a strong cast of supporting characters. Alda's mother, Theodelinda, is one of my favorites if only for her having raised a daughter like Alda. Leonhard and Beringar, Alda's uncles, leap from the pages as larger than life. Gerard, Hroudland's brother, earned a place in my heart as well, as he was a kind and decent man. Hroudland's uncles, involved in religious politics, were vipers, always trying to stir up trouble for Hroudland and Alda.

I adored Hroudland and Alda's story. The way Ms. Rendfeld used the myth of Roland to shape their story was captivating. Alda, too, has legend swirling around her family. She is of Drachenhaus, which is built on a mountain where Siegfried is said to have slayed the dragon and covered himself in blood to make himself invincible. It's all the detail that made this story so fascinating. I appreciate all the detail, from the tension emanating between Hroudland and Ganelon, the armies believing they were victorious because they were fighting for God's will, all the way down to the mud squishing under Alda's shoes at Nonnenwirth, the detail enveloped me and kept me ensconced in the medieval times of this story.

With the characters so well fleshed out, entrenched in the historical happenings of the time as well as the description of daily life on medieval men and women, The Cross and the Dragon is a lush, textured and very satisfying historical read. 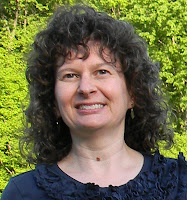 Kim Rendfeld has a lifelong fascination with fairy tales and legends, which set her on her quest to write The Cross and the Dragon.She grew up in New Jersey and attended Indiana University, where she earned a bachelor’s degree in journalism and English, with a minor in French. If it weren't for feminism, she would be one of those junior high English teachers scaring the bejesus out of her students, correcting grammar to the point of obnoxiousness. Instead, her career has been in journalism, public relations, and now fiction.Kim was a journalist for almost twenty years at Indiana newspapers, including the Journal and Courier in Lafayette, The Muncie Star, and The News and Sun in Dunkirk, and she won several awards from the Hoosier State Press Association. Her career changed in 2007, when she joined the marketing and communications team at Ball State University in Muncie, Indiana. She gets paid to agonize over commas and hyphens, along with suggesting ways to improve writing, and thoroughly enjoys it. She is proud to have been part of projects that have received national recognition.Kim lives in Indiana with her husband, Randy, and their spoiled cats. They have a daughter and two granddaughters.