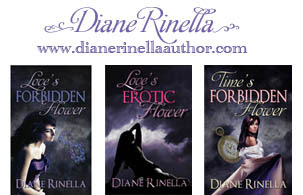 Hi, Diane! Thank you so much for joining me on the blog today! I appreciate you taking the time for an interview. :)


Your subject matter is very controversial. Why did you choose such a tough subject?

Love’s Forbidden Flower was born out of frustration. I had just watched a 1970 counter-culture film called The Buttercup Chain. In it, two cousins related via twin sisters, thus making them genetic half-siblings, have a very special attraction. The entire film I waited for the obvious to happen. When the film ended and the man was heartbroken because he refused to act on his emotions, I was angry because the story didn’t go where it so clearly needed to. Honestly, I didn’t see the big deal.

How would you describe your story telling and writing style?

There is always something going on with each character. Nothing is included for the sake of shock. Every scene, word, and gesture exists for a specific reason, even if it seems like it is fluff. I get tons of letters from readers saying they never see my twists coming. The truth is, there are plenty of clues in there. It’s not like some mystery novels where the killer is totally obvious or not enough clues were
presented to tell you what is going on. It’s all there. You just need to step back and absorb it.

Tell it straight, do you really believe it’s okay for two people who are related to be together?

It’s more that I think it is wrong to keep people who love each other apart. Some people search their entire lives and never find the one who completes them. What if you just happened to be born right next to that person and got to spend your entire life in happiness with them? Then what if someone said you could not be happy with that person because society thinks it is icky? No matter how you slice it, to me that is wrong.

You’ve caught a lot of flack for your views. How does it feel when someone slams you to the wall for your work?

I won’t lie and say that it is no big deal. I do get some bad reviews, but the reality is that everyone does, and the good and great ones far outweigh the bad ones. As for the bad ones, they happen for two reasons. If someone does not like my writing style or storytelling, I respect that. No writing or story is for everyone. That would be really boring and totally unadventurous. However, if my book is bashed for the subject matter, that hurts on a personal level, because I have many friends in unconventional relationships and it’s like they are the ones being slapped. I have gotten reviews that are more of a “How dare you treat these people as normal?” rant
than a review of the book. A book review is a chance for one reader to express to other readers their opinions on a work to help others judge if it is something they would like. It’s not a public forum for politics. If you don’t feel that not all people deserve the same rights, please don’t read my work. It’s simply not for you.

You mentioned friends in unconventional relationships. Is that reality or a gimmick?

It’s reality. I’ve met many people on this journey and some of them have become true friends. If you pull up my friends list or address book, you would be floored if you knew who some of the people are either by their profession, how I met them, or by their stories. Good luck getting me to talk though. There will be no death bed confession, so don’t go getting any funny ideas.

I don’t recall seeing the word incest in your books even once. Was that intentional?

A friend noticed that the other day. It was intentional. I consider the word incest sensational and misguided. Incest has a lot of negative connotations and often represents a form of abuse or a fetish. These are romance novels, not fetish books where the characters harp of being related and refer to each other as brother and sister in bed. Personally, I find catering to the fetish uncomfortable. The actual relationship does not bother me in the least, the fetish does. Some readers want that fetish aspect and are annoyed that I don’t cater to it, but these books are civil rights pieces. Lily and Donovan are siblings, it is an obstacle and it sucks, but they are related so the reader can see how unfair the stigma is. Love’s Erotic Flower was written for the fans who want to see a different side of Lily and Donovan, and even in there the blood relationship is not once mentioned.

What is the biggest complement you have received?

There is a website that promotes equal rights for all adult, consensual relationships that is in high support of my work. That is the best compliment I can get. They recently coined the phrase “Friend of Lily” to be akin to “Friend of Dorothy.” A Friend of Dorothy is someone who is homosexual, thus a Friend of Lily is someone in a consanguinamorous relationship. I strongly encourage anyone seeking more information or support regarding any consenting adult relationship to view their site at http://marriage-equality.blogspot.com. I also have a permanent link to them and other helpful sites on my own website in the Friends Of Lily section: http://dianerinellaauthor.com/friendsoflily/

What if someone wants to check out your work but is not sure it is for them?

Chapter one of Love’s Forbidden Flower is posted on my website in the Novels section. I encourage people to try before they buy. I cut to the chase right away, so the read knows what they are up against from the start. http://dianerinellaauthor.com/loves-forbidden-flower-chapter-1/

What’s next for you?

It’s time to move on from writing about this subject, but my advocacy for the right to love will never end. I’m currently working on Scary Modsters…And Creepy Freaks, a light romance about a girl who feels out of place in the world and channels a dead rock star through her Oujia board. The layers and layers of plot, messages, and controversy found in my other books won’t exist in this one.


Thanks so much for your candor, Diane!

Ms. Rinella delivers Lily and Donovan's story in such a tender way, it captured my heart. Throughout these pages, we see a facet of their relationship we didn't see much of in Love's Forbidden Flower - a more intimate view of the depth of feelings these two have for one another. There is nothing these two won't do for the other's happiness. Even though Love's Erotic Flower is essentially erotica, it's told with Ms. Rinella's brilliantly lyrical prose. So rather than reading just raw sex, we get raw sex, depicted eloquently, between two soul mates who are very much in love.

Since it is a very short read, there isn't much character growth. But I really appreciated the glimpse of this side of their relationship.

Enjoying San Francisco as a backdrop, the ghosts in Diane’s 150-year old Victorian home augment the chorus in her head. With insomnia as their catalyst, these voices have become multifarious characters that haunt her well into the sun’s crowning hours, refusing to let go until they have manipulated her into succumbing to their whims. Her experiences as an actress, business owner, artisan cake designer, software project  manager, Internet radio disc jockey, vintage rock n’ roll journalist/fan girl, and lover of dark and quirky personalities influence her idiosyncratic writing.


Posted by Bookworm Brandee at 1:30 AM