Hey y'all! Welcome to my stop on the blog tour for Unstoppable, the second novel in Ginger Voight's Fierce Trilogy. I have my review, an excerpt, and a giveaway for y'all today!

This tour is presented by Brandee's Book Endings. 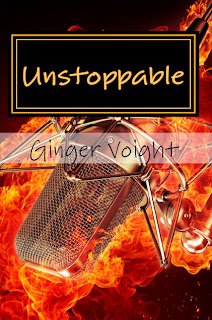 Book Summary:
His eyes were rimmed red when they met mine. "I die inside every time he touches you, and there's nothing I can do about it. You've made it clear that you're going to go on with this sham of a marriage, no matter who it hurts in the process. You lie to everyone, Jordi, including the people you're supposed to love the most. And I just can't take it anymore. This is not the way I want to live my life."

In book #2 of the Fierce saga, Jordi Hemphill has joined her true love Jace Riga on cross-country tour with Giovanni Carnevale and Dreaming in Blue. The star-crossed lovers anticipate the freedom to explore their burgeoning relationship, despite the continued complications of her ties to her tormentor Eddie Nix and Jace's new standing as a rock icon. Nothing is as it seems, which make the pair fodder for the rumor mill. Forces from all directions threaten to tear them apart, but it is Jordi's own insecurities that drive a wedge between the aspiring diva and her hero.

Author Ginger Voight further delves into the key issues that keep Jordi from defeating her demons once and for all. This sweeping saga unearths revelations that will rock Jordi's world forever... and set her on the path to the path to her story's epic conclusion.

If you haven't yet started this trilogy, Ginger is offering Fierce and Unstoppable bundled together for only $4.99.

Brandee's Book Endings has created a Facebook Event for Unstoppable. You can join it here:

In Unstoppable, Ginger Voight really turns up the angst! Between a narcissistic butthead of a husband, social media woes, lies, secrets, and more lies, it seems the world is conspiring against Jordi.

Unstoppable begins with Jordi and Jace preparing for the four month long tour with Vanni's band, Dreaming in Blue. Things seem to be looking up for Jordi. However, Jordi and Jace's relationship is still on the down-low until Jordi can divest herself of her worthless husband, and the possibility of a scandal with its potential effects on Jace, Vanni and Graham.

Over the course of the tour, things get very tense between the Fierce stars. Eddie makes is presence felt by all. Jace spends much of his time with Shelby, who is carrying a torch for him. This, along with Eddie's treatment of her, and the media and audience's demeaning of her does nothing good for Jordi's tenuous self esteem.

Jordi does everything she can to protect everyone but herself. Unfortunately, those around her still hurt. Some of the decisions and self-defeating actions Jordi makes drove me bat-shit crazy! But I reminded myself that this is Jordi - she's only 19, and her self esteem is usually scraping the ground. She's making the best decisions she's capable of.

Thank goodness she has Jace, Vanni and Andy, and Graham and Maggie. Although things are strained with Jace, Vanni and Andy, stand by her side. I didn't know it was possible to love or think more highly of Vanni, but he proves himself more and more worthy of my high esteem. He takes Jordi under his wing and is the big brother caretaker she so desperately needs. Maggie, who helps Jordi with her physical therapy after Jordi suffers a back injury and who acts as her dietitian, along with Graham have become Jordi's surrogate parents. Iris also makes an appearance as Jordi's publicist and helps Jordi navigate the waters of her new-found fame. Even Yael and Felix offer their brand of encouragement. I delighted in seeing all these characters I've grown to love.

In Unstoppable, Jordi finds herself on the brink of failure in so many areas. With the help of her friends, and especially Jace, she pulls herself back. However, Jordi is faced with the realization that there are things she needs to work through in order to move forward. The revelation at the end of the book had me gasping and at the same time, thinking things made a little more sense.

I'm anxious to read Epic, the conclusion to the Fierce trilogy. I'm really anticipating seeing Jordi grow and mature emotionally. And with Jace by her side, along with her new 'family', it looks like our girl will be unstoppable. :)

“You don’t have to explain,” he said. “You just have to come with me.”

I shook my head but he wasn’t having it. He pulled me from the room and led me toward the elevator, ultimately to a car out front.

“Where are we going?” I asked.

He took me back to the Brooklyn brownstone. Before we exited the car he handed the driver a hundred dollar bill and my hotel key card. “Bring her stuff,” he instructed before pulling me from the car and leading me up the steps.

“This is a little inappropriate, don’t you think?” I asked as I scanned the darkened street for PING reporters.

“Like I give a shit,” he said as he pushed open the door. He stared down at me with those deep, almost hypnotic eyes. “Inside, young lady.” I didn’t argue. I followed him into the living room like a good little girl.

“I don’t know what’s going on with you, Jordi,” he said as he pulled me down onto the couch beside him. “But I do know it won’t get any better if you’re left alone to lick your wounds. You’re staying with me the rest of the trip.”

“Is irrelevant,” he said, echoing what Jace had said. “Your problem is you’re worried way too much about how things look to people who simply don’t give a damn. They need you to fail. They need you to do something they can criticize. They are always going to find something wrong with what you do or say.”

It was such a Jace thing to say tears immediately sprang into my eyes. He pulled me into his arms and held me there, which caused the dam to break. He rocked me gently as he stroked my hair. “My poor, miserable Jordi,” he crooned. “How long are you going to carry your pain? There’s no shame in letting it hurt. But eventually you have to let it go or it’ll kill you.”

He held me until I soaked his shirt, his hair fanning around my face like a halo. I was mortified by my behavior, but when he tipped my chin so I could look at him, all I could see was total acceptance. It was like Jace, or Corey, or even my Dad.

He bent to kiss me slightly on the cheek. “Do you know how loved you are?” he asked. I shook my head.

No, I didn’t know. I don’t think I ever did. “Well, you are,” he assured. “I love you. Andy loves you. Even Renata and Grandma Lydia love you,” he added with a grin that made me laugh. “Everyone on tour loves you,” he continued. Then, finally, “Jace loves you.”

I shook my head. “I just make him miserable. Shelby’s a better fit,” I muttered. “They’re the perfect couple.”

“Don’t tell me that you’ve bought into the press about that.”

I shrugged. “It’s not press. I walked in on them in Philadelphia. They were in his dressing room and he was massaging her leg.”

“And why would that matter to a happily married woman?” he wanted to know as he brushed some hair away from my eyes.

I wondered what Vanni would do if I told him the truth. What could he do? What could anyone do? I was stuck and I knew it. I turned away from those all-seeing brown eyes. “It doesn’t matter,” I found myself repeating, as if I said it enough it would actually be true.

He pulled me from the sofa and sat me at his piano. His fingers danced along the keys, as if trying to find a melody. I watched him as he closed his eyes. Each note he played traipsed across his face until finally he found what he was looking for.

“She doesn’t know,” he sang. “She can’t believe… she’d find the person that would never leave.” He turned his head slightly to look at me. “She hangs onto the past and every ghost, all lies that hide who loves her most. She’s beautiful but she can’t see just how perfect she is to me.”

I placed my head on his shoulder and closed my eyes. Even after all these years, Vanni Carnevale was my guardian angel, throwing me a life line with that amazing voice. 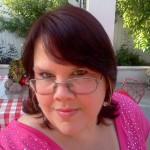 Having grown up reading different authors like Danielle Steel and Stephen King, Ginger has always been drawn more to story than to genre. This shows up in her various stories. Titles such as MY
IMMORTAL and TASTE OF BLOOD are a delicious, heady mix of horror, suspense, and romance.Genre romance, however, has held a special place in her heart, ever since she read her first Harlequin novel when she was only eleven. As a result, Ginger is making a name for herself writing romances of her own, starring women who look more like the average American woman rather than those traditionally represented in the size-biased American media. Her Rubenesque romances were created especially for those heroines with fuller figures, who can still get the man of their dreams if only they believe they can. Such titles include UNDER TEXAS SKIES, LOVE PLUS ONE, THE GROUPIE TRILOGY,
FIERCE and PICTURE POSTCARDS.

Ginger was included in the best-selling book by Smith Magazine NOT QUITE WHAT I WAS PLANNING, featuring her six-word memoir.
Posted by Bookworm Brandee at 2:30 AM