I reviewed the first two books in this series, Marked for Vengeance and Tethered by Fate. If you missed those reviews, you can click on the titles to read them now. It is hard to be non-spoiler-y of the previous books in the series at this point, but I will do my best. 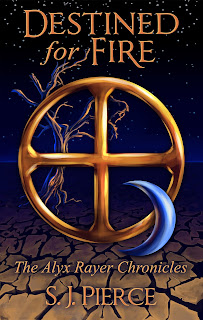 Synopsis
"Fire… this was her destiny. She would leave this world in fire and hopefully right all of these terrible wrongs."In this final installment of the Alyx Rayer Chronicles, follow Alyx and Micah as they travel back to the hell that once was Earth in search of Serpious and his legion, as well as the only thing they have left to care about now - revenge.May not be suitable for YA.

Wow! This is a brilliant conclusion to the Alyx Rayer Chronicles. This last installment doesn't have quite as much action but it certainly has suspense. Ms. Pierce did an excellent job of bring this series to a close.

Destined for Fire begins where Tethered by Fate ended. With Isaac gone and all the angels having been recalled to Heaven, Alyx decides to seek vengeance against the one who has destroyed her world. And Isaac's son, Micah, is accompanying her.

Their pursuit leads them to Australia, where we meet a few other colorful characters in Lachlan, Aiden, Cleo, Rae and Joshuah. We don't see Joshuah for too long but he made such an impression on me. He was so intuitive for his age and his words were exactly what Alyx needed to hear at the point where she meets him. It seemed almost like divine intervention. ;)

Rae was an excellent addition to the cast. Her feisty spirit and knife throwing skills added to the liveliness of this story. And I enjoyed the relationship that was built between her and Micah.

Samuel, of course, is there to try to protect Alyx. His loyalty to Alyx almost broke my heart. I was very pleased with where his character ended up.

Destined for Fire is the culmination of all the opposing work done by Serpious as well as The Creator. I admired Alyx's faith in the face of having been effectively abandoned and left to seek justice on her own. I liked being able to feel it as Alyx questioned her decisions and motives. I could absolutely identify with her wavering. But Alyx is strong...stronger than she realized. And I was so proud of her.

I don't think there's quite as much action in Destined for Fire despite the big battle for Earth. I did like the imagery Ms. Pierce created for the battle. I was also glad to get the questions I'd carried throughout the series finally answered. For example, throughout the series, Alyx has known she is different from the other Protector Angels. I adored the revealing of The Creator's reason behind her differences.

Ms. Pierce's use of religion and mythology for the foundation of the series fascinated me. Her storyline doesn't always follow traditional tenets of religion but instead offers food for thought about The Creator and the grand design. I particularly delighted in the fresh look at what, in my mind, equated to the end of days. I found it interesting how humankind and their souls are saved.

In Destined for Fire, I was once again impressed with Ms. Pierce's storytelling. The Alyx Rayer Chronicles, as a series, is unique and very well-written. I'd highly recommend the series if you're looking for something a little out of the ordinary.