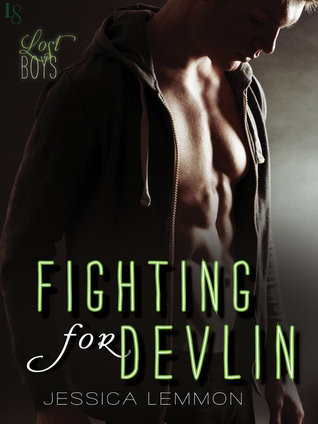 Synopsis
Devlin Calvary makes his own luck. Orphaned as a young child, he was taken in by a crew of bookies and gamblers--and they became his family. They're the reason Dev's running a trendy bistro, living in a high rise, and enjoying the good life with a string of women who never ask for too much. Until, one night, he finds out how much it hurts to trust the wrong people.

Rena Lewis sticks to the straight and narrow, determined not to slip up again...like the terrible night of partying four years ago that ended in tragedy. A waitress at Oak & Sage, she knows that sleeping with her boss is not a smart move. But when Dev shows up on her doorstep, beat up and clearly shaken, Rena's not about to turn him down...or kick him out of bed.

Dev reawakens something primal within her--a need to go wild. And Rena soon finds out that the heart she'd sealed away years ago still has the power to fight for love.

I've read several great reviews of Jessica Lemmon's work (Braine, Kimberly, I'm looking at y'all). Fighting for Devlin seemed like a great one to jump into and when Braine @Talk Supe asked if I wanted to buddy read, it was an opportunity I couldn't pass up! Here's what we had to say...

Hey Braine! You read it fast! I hope you enjoyed it. You're not missing any hair, right?? ;)
LOL! I'm so happy it wasn't angsty! I read New Adult and I start hiding sharp objects. They have a certain "effect on me". And yes, I did enjoy it, thank you very much!
LOL I'm glad no sharp objects were required for Devlin. I'm glad you enjoyed it because I did as well and I wouldn't have known to read Lemmon if it weren't for you.

I'm happy to do so!
I admit that Lemmon immediately drew me into this story. I had to know Rena's and Devlin's full stories. How did this compare to other stories you've read from Lemmon? Does she always pull you in directly?
If I were to compare it to colors, Lemmon's Bad Boy series are like primary colors, red, blue, and yellow. FIGHTING FOR DEVLIN is like a spread of monochromatic gray and black. It's like a quickening of sorts you know? I felt the passion of that first true love. In that sense, it's similar to her Bad Boy series in that it's earnest and doesn't toy with your emotions.
I like the color comparison. I liked how Lemmon made that first love passion so palpable. And that this story didn't toy with my emotions. And I'm even more eager to read more from Lemmon now.
I liked the chemistry - which was so electric it was palpable. And I enjoyed seeing how they brought out each others' strengths.
It must be so awkward to be so sexually attracted to a coworker. I bet that freezer's temp rose up several degrees!
LOL Yeah, hopefully nothing was ruined or got freezer burn! ;)
I thought Lemmon did well with the gambling plotline. I felt like Devlin was a strong person to have lived with that sort of temptation for so long and to have abstained. What did you think?
The gambling was a good backdrop, it lent the story a sense of danger. I felt it skimmed the surface though because Devlin was in deep with Sonny in their "honorable illegal gambling" gig. I found that clause funny btw, the irony! As for not participating, I'm surprised he didn't use his skills for gain, at the same time I also get why he abstained. It brought too much tragedy already.
Did you feel like there's a missed opportunity though? Like with a backdrop like that, she could've taken it a step further and made it more romantic suspense?
Irony, indeed! I thought that was funny as well. I was glad that Devlin abstained from using his particular skills for his own gain. He had seen so much tragedy already. And, of course, if he had used his skills, that'd make him a completely different sort of character.
It definitely could have been taken a step further with the gambling backdrop. Lemmon had the 'bones' for it but I guess that wasn't the story she wanted to tell. Since I've not read her before, I don't know if she could have delivered. But still, I liked the story as it was.
Lemmon also did a great job with introducing supporting characters that I'm eager to spend more time with. This is something I really appreciate in a story, as you know. Is this typical of her? And what did you think of the supporting cast?
Oh yes! She has a habit of introducing the next couple to avoid insta-love scenarios. What do you think of Cade and Tasha? I know Cade's book will be rife with issues, the boy's got a lot of shit to deal with.
Ooh, I'm going to like how she introduces the next couple then. :D I like Cade and Tasha and I'm eager to see exactly what they're back story, together, is. Yeah, it's definitely going to be a story rife with issues. I can't imagine wading through all Cade's going to be wading through...

Cade scares me. He's so angry! Not that I can blame him, but there's a lot of things he needs to sort out. I'm scared for Tasha, it's not going to be a smooth road for sure.
What about Sonny in particular? I wasn't too sure of him at first. But I liked the direction Lemmon went with him. I don't want to spoil anything for anyone, but she redeemed him in my eyes.
Oh yes, Sonny was a surprise! He might be a betting lord or something like that, but he is honorable. Different, but I appreciate Lemmon not making his character into a stereotype.
I was so happy he ended up being honorable. I, too, liked that she made him her own, so to speak, rather than putting him into a certain mold.
Lemmon really brought the feels and the heat with Rena and Devlin. I didn't feel like there was any unnecessary angst or that anything was contrived even with some of those things Devlin did towards the end. I felt like it was a very satisfying story. What did you think of it overall?
I appreciate the realistic level of angst. Their conflict was believable, natural and expected even. Devlin just pulled a lot of jerk moves, you know? Sure it was "necessary", but his little ditty with Melinda was too callous and the usual push back towards the end was also not surprising considering men are dense and are usually emotionally handicapped when faced with their HEA.
I also appreciated that it wasn't too angsty - I felt their decisions were realistic. Devlin did pull some really jerk moves though. I didn't like it at all, honestly. And the push back at the end was a bit predictable. In fact, those two things probably got to me the most because they were sort of typical and created drama that wasn't all that necessary. But Devlin *did* come to his senses...with some help. ;)
I'm happy Rena gave him a hard time, I just felt like she took the gambling part too well. Sure she might be a "bad girl" underneath, but she's trying to "change" or something. I'm just surprised that she didn't freak out enough. Sure it didn't happen, but what if it got super messy and unraveled and she found herself in the middle of it? Maybe I'm just being such a hard ass, I just felt it unconsistent with where Rena's character is going.
I was also happy she gave him hell. That felt realistic. Maybe she did handle the gambling a bit too gracefully but I guess I felt maybe she thought she *knew* Devlin on some deeper level that helped in her being understanding. But you're right - things could have gone south and she could have been wrapped up in it tight. Sure she was trying to be 'good' but wanted the bad boy and all, but it really could have backfired in her face. You're absolutely right in that she was trying to distance herself from how she felt she was when she was with her previous boyfriend, so accepting a life with a guy involved in crime, no matter how limited, was inconsistent.
What did you think of this story seeing as NA is not one of your favorite genres?
I can read NA, I just pick authors I can trust won't shred me to pieces. LOL It helped that I've read Lemmon's contemporary romance so that familiarized me with her style. I just wished the MC's doesn't have these messed up backgrounds. But heck, it's NA, I shouldn't expect any different.
How about you? Is this your first Lemmon? Did you find it sweet or tangy?
LOL True, messed up backgrounds are standard issue in NA, it seems. This was my first time with Lemmon but it won't be my last for sure. I guess I'd say it was a little sweet and a little spicy. :D

You should definitely pick up her Bad Boy series. If you think this is good, that one's even better!


Thanks for buddy reading with me, Braine. I hope we can do it again SOON!

Mom's kitchen smelled like pie, which might be a good thing if she could bake something other than scones. To date, she'd failed at every attempt at pie over the course of my lifetime. It didn't stop her from trying, which, I guess, was kinda of admirable.
"Apple?" I guessed as I hung my coat in the hall closet.
"Rhubarb!" she called, bent over the oven.
I cringed. I had no idea what rhubarb was or why she'd attempted to put it into pastry. "Oh."
She stood, sliding the pie onto the stovetop. She wore the apron I bought her for Christmas, the one with a cartoon bottle of win that read: I POUR BETTER THAN I COOK.
We both frowned at the sunken layer of dough. "It's raw in the middle," she announced with a quirk of her lips.
Yet the edges were black. Amazing. Maybe instead of being a horrible baker, she was an incredible baker, because I had no idea how she could mess up pie one hundred of the time.