I'm super excited to be a part of the blitz for Magan Vernon's Life, Love & Lemons. This sounds like a great coming of age YA novel and I can't wait to read it. I'm participating in the blog tour as well, so you can read my review on September 25th. Today, I have all the important details about the book, an excerpt, AND a giveaway.

One LUCKY commenter will win an ecopy of Life, Love & Lemons. To enter, leave a comment telling me what you think of the excerpt. This giveaway is open internationally and ends August 30th. The winner will be chosen randomly. 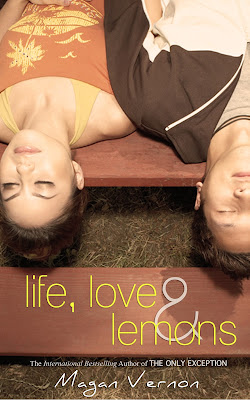 Synopsis:
When life hands you lemons, sometimes you have to say screw the lemons and bail.

Seventeen-year-old Bentley Evans had it all. Then her Dad got laid off.

Now she has to move across town to a small apartment and leave her life of luxury for public school and a job at the local burger place. Just when her world seems like it's crumbling she finds solace in the unlikely punk boy next door, Kai Stone. But as their relationship blossoms, a jealous ex-girlfriend and a secret to tell that threatens to bring disaster back into Bentley’s life.

I sat on the cold tile floor of the break room with my head between my grease stained knees. The last person I expected to come back and check on me was Kai. In my frenzied cry I somehow managed to blurt out that I female problems and that got Jason to find someone else to do the sweeping. No guy ever wants to fight that one and Jason’s face turned red when I mentioned it.

“I’m fine." I sniffled, hoping that Kai would just go away. I wanted to be alone. How could my friends have done this to me? It was bad enough that I already lost my house, my school, and now some of my best friends since grade school. To top it all off I had some kid with hot pink shoes acting like I was the one with issues.

“Well obviously you’re not." He reached his hand out toward me.

I crossed my arms firmly over my chest. “I don’t need your help." It came out whinier than I intended. Instead of walking away, he just plopped down beside me and spread his long legs out next to mine.

“You can only try and make lemons into lemonade for so long before you just have to say, screw the lemons, and bail." He stretched his arms out over his head.

I couldn’t help but smile. “I didn’t think anyone but me actually used that expression.”

“Well looks like you were wrong." He slowly stood up and turned to face me. “Now c’mon and let me show you what else you’re wrong about.”

As I looked at him, I didn’t know what came over me. Maybe it was just my girl emotions working overtime or maybe it was his pleading puppy dog eyes, but for some reason I took his hand and followed him out the back door.

“So where are we going?" I questioned, letting go of his hand as soon as we got outside. I was really glad we exited out the back so no one saw us. I really didn’t want people getting the wrong idea. Kai was a nice guy and everything, but I knew the other co-workers would have a field day if they saw us together. Luckily it was just my little red mini and a giant orange car in the parking lot.

“Just get in and you’ll find out," He said conspiratorially and opened the passenger door of the giant orange thing.

“What is that?" I pointed at the car, tilting my head.

“This would be my car, a Ford Falcon." He motioned again for me to get into the car. Slowly I approached the car and got in as he slid over the hood of the car to the driver’s side.

“Isn’t that like something out of Star Wars?" I asked as he got in and started the car.

“Sorry, I’m not up on my geekery." I laughed and I held out my palms toward him.

“It’s okay I didn’t really expect you to be." He slid his long fingers over toward me. I thought he was going to reach for my hand but instead he turned on the stereo, letting a loud screaming guy’s voice blast over the speakers.

“Ugh!" I put my hands over my ears and screeched, “What is that?”

Kai sighed and turned down the music. “It’s the Circle Jerks, you know Punk Rock.”

I shook my head. “Never heard of them, maybe you have something else that I might like."

I reached up into the CD visor and browsed through his CD’s. Bad Religion, The Misfits, Dead Kennedys —All these bands I had never heard of and sounded really depressing.

“How about we just turn on the radio?”

“You’re kind of demanding you know that?" Kai looked at me out of the corner of his eye and leaned back in his seat.

“Gee, you’re such a charmer," I mocked. “But seriously, where are we going anyway?”

“It’s a surprise,” he said mischievously, smiling as he turned down State Street.

“Okay," I said and pulled my uniform top over my head.

“JESUS, what are you doing?" Kai swerved the car and almost hit the curb in the process, causing me to almost bounce my head off the dashboard.

“Ugh!" I folded the shirt in my lap and then ran my fingers across the straps of my white tank top that I had on underneath. “I just didn’t want to show up to wherever we were going in my uniform; what did you think I was doing? Trying to strip down in the Star Trek car?”

“I don’t know." He shrugged. “I thought the Falcon had some magical powers or something.”

Magan Vernon is a Young Adult and New Adult writer who lives with her family in the insurance capital of the world. She is in a very serious, fake relationship with Adam Lambert and constantly asks her husband to wear guyliner. He still refuses. She also believes her husband is secretly an alien, disguised as a southern gentleman.