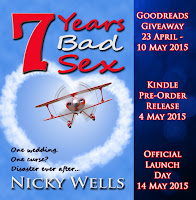 Welcome to my stop on the blog tour for Nicky Wells' 7 Years Bad Sex. My stop includes all the details on this fun read, my review, and an interview with Ms. Wells. Enjoy! 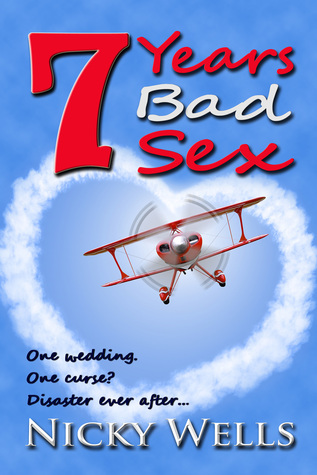 Synopsis
One wedding. One curse? Disaster ever after...

A seven-years-bad-sex curse? Surely not! Yet something went wrong when rock singer Casey and drummer Alex got married on that beautiful yacht anchored off St Tropez in the south of France. Something went badly wrong. For even on their wedding night, the young couple discovers a complete and somewhat surprising inability to make love. Muddling through their honeymoon with a string of thin excuses for their predicament, the lovers defer finding a solution (and panicking) until the return to their home in London. After all, they married for life and to make rock music, not for the love of sex. Right?

But when they resume life as normal in London, all hell breaks loose. Increasingly frantic in their quest for release, the unhappy newlyweds embark on a string of hilarious and occasionally harmful antics that drives them, their band, and an assortment of random strangers to the brink of despair. But it ain't over 'til it's over or, in this case...it ain't over 'til the newlyweds sing. 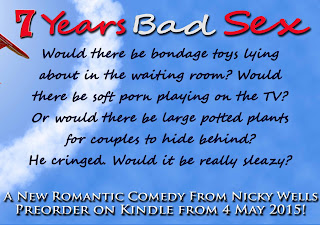 Both witty and poignant in equal measure, 7 Years Bad Sex is a gem!

Alex and Casey make up half the band, Blue Heart. And they own each others' hearts. The story begins at the wedding - a beautiful affair. However, once their honeymoon begins they realize they have a problem...they seem to be having issues getting completely physical.

7 Years Bad Sex chronicles Alex and Casey's start to married life and their trials in intimacy. While neither believes in such things as curses, it's hard to deny that something wonky is going on. They try everything, and I do mean everything, to make it to the finish line. Luckily, they have a deep and abiding love because the lack of release keeps them both on the verge of blowing.

Wells cleverly relates this tale of woe with with both humor and compassion. I admired their courage and their mutual respect. I also admired the love and deep bond between Alex and Casey and I was anxious for them to reverse the curse. They were fortunate to have supportive friends and to have met and made a few new ones. It eased their struggle. The lengths this couple had to go to would push some over the edge. Alex and Casey, though, they fought hard and so deserved their HEA.

Hi Nicky! Thanks for stopping by!

I laughed over your *note* about 7 Years Bad Sex being a pure work of fiction - that it didn't happen to you. ;) Where did this idea come from?

No, it definitely didn't happen to me. If it had, I'd have had to have published it under a pen name, LOL!
The idea came to me at the awards dinner at the Festival of Romance in 2013.  I was at a table with nine other authors. We were all toasting each other and the award winners, and suddenly my table neighbour nudged me and said, "you didn't make eye contact with me while we were toasting, that's seven years bad sex for you." Of course I laughed. What else could I do? I'd never even heard about the superstition, but he went on to explain it in great detail. And there it was in my head, the complete idea, quite suddenly. What if you took a couple of newlyweds and inflicted that curse on them?
Obviously that was in 2013, so I let the idea stew for quite some time; plus I had "Fallen for Rock" and "Fairy Tale in New York" in my writing 'queue' at that point. But at long last, in January of this year, I sat down and wrote the whole thing in about nine weeks. It was an awesome (and quite funny!) experience!

Some couples might not make it through the difficulties Alex and Casey endured. What do you think it is about their relationship that makes them so strong?

Real love and a great sense of humour. Oh, and rock music. And their friends!
But seriously, I wanted to explore the whole idea of marriage, love, and sex. Are they ependent on each other? What if you take one away? As Casey and Alex have to acknowledge several times in the story, everyone has needs--but how do you cope if those needs can't be met? Obviously we're not expecting a marriage to be fireworks for all eternity, but what if the physical romance fizzles out completely? What do you do?
Alex and Casey have love and a strong friendship that preceded their relationship. When the sex goes wrong, they are able to laugh it off to begin with. It's only later, when there's no seeming way out, that the stress begins to wear them down. And yes, there's a real crisis point towards the end that gets resolved in perhaps a slightly unorthodox manner... but it gets them through, doesn't it?  So love, friendship, and laughter. And rock music!

I saw you did some research into British law regarding a few things about Alex and Casey's story...oh, and oysters! ;) It made me wonder whether there was any truth to the myth of the 7 Years Bad Sex curse?

Great question. It's a superstition held in many parts of Europe. Actress Keira Knightley (she of Pirates in the Caribbean) apparently believes in it. Is there any truth to it? *shrugs* I really couldn't say. Personally, I'm not superstitious by nature. I don't believe that breaking a mirror gives you seven years bad luck. I don't cross the road  when I see a black cat or throw salt over my shoulder to ward off evil. And obviously I didn't get afflicted by seven years bad sex after my own toasting faux pas two years ago.
I couldn't find any information on the origins of this superstition... So let's agree it's a myth and a superstition, but it makes for a great story!

Will be see any more of Alex, Casey, and their gang?

Ah. Hm.
You see, technically, "7 Years Bad Sex" was intended as a standalone. But you know the ending, right? So the obvious sequel would have to be "7 Years NO Sex" for reasons that you might guess, and that your readers can find out  about at the end of the book.
Have I written it yet? No. But I just might... *winks*

I really enjoyed their story, Nicky! I'm glad you put humor in there, otherwise it would have been really sad! *ha*

Thanks, Brandee! It was quite a different thing for me to write, and a bit of a challenge at times. I didn't want it to be sordid and a jumbled collection of random sex scenes, because that really wasn't the point... But obviously I had to put some kind of suggestion and action in there. LOL! Glad you enjoyed it! XX