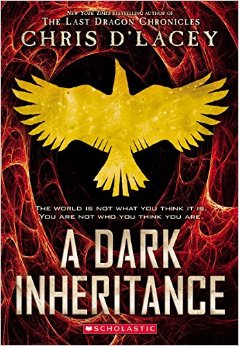 A Dark Inheritance
Unicorne Files #1
Release Date: May 27 2014
Genre: YA Fantasy
Source: Purchased Hardcover
Rating: 3 Bookworms
Goodreads
Synopsis
When Michael Malone discovers his supernatural ability to alter reality, he is recruited by an organization dedicated to investigating strange and paranormal phenomena. He joins in hopes of finding his fater, who mysteriously vanished three years earlier. Michael's first task is to solve the mystery of a dog he rescued from a precarious clifftop -- a mystery that leads him to a strange and sickly classmate and a young girl who was killed in a devastating accident. Stakes are high as Michael learns to harness his newfound ability and uncover the deadly truth about his father's disapperance.
A bold and thrilling tale of alternate realities, paranormal mystery, and extraordinary adventure.

Once upon a time, one of my favorite book series was Christopher D’Lacey’s The Last Dragon Chronicles. Thinking back on it, it was very scattered and, well, interestingly organized. However, I loved it in fourth grade, and when I found a new book he wrote, I thought I might as well read it. It is called A Dark Inheritance, where young Michael discovers he can alter reality exactly like flipping through the pages of a book, and wants to be recruited by a secret agency.

The warning lights of a cliché were coming on. There was the boy, Michael, considered to be a delinquent by everyone now. There was his obnoxious little sister, there was the mysterious goth girl who doesn’t have a place, the guiding force. The agency that recruits him, called U.N.I.C.O.R.N.E., is dedicated to investigating the paranormal. They assign Michael the task of finding out the story behind a dog that he rescued, and this leads him to the goth girl, Freya, who is being haunted from inside her own body, in an obscure form of possession.


All in all, D’Lacey did his usual off-the-beaten-path-fiction, with the incredibly strange plot, but cliché characters, leading for a mostly enjoyable book.