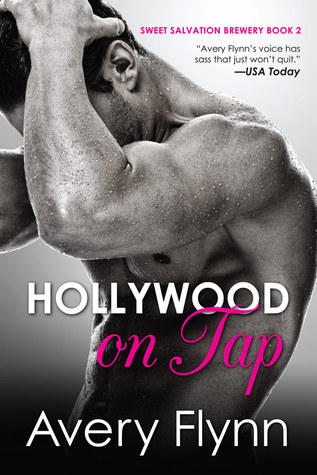 Synopsis
For years, Sean O'Dell has hidden his past as a Hollywood heartthrob from everyone at the Sweet Salvation Brewery. Howver, the arrival of nosey efficiency expert Natalie Sweet threatens the status quo. It doesn't help that with her glasses, buttoned-up sweaters and always pulled-back hair that she's uncovered one secret already: His attraction for hot librarian types.

Natalie has had enough of the strong-and-silent Sean submarining her efforts to change the brewery for the better. She's ready to do whatever it takes to make her vision a reality, even if that means taking down a pig-headed and too-hot-for-his-own-good brewmaster.

Sizzling attraction battles stubborn determination as Natalie and Sean go head to head in a battle that's anything but business as usual.

Lexxie (@Unconventional Bookviews) and I are continuing this series and our chats about it. We hope you enjoy!


Omigoodness - I don't know where to start! I loved Natalie and Sean's story. I felt like I really knew them better and could empathize with them both. I can't put my finger on the 'why' though. What do you think the difference is between their story and Miranda and Logan's?

The chemistry between Natalie and Sean was combustible, wasn't it? I mean, I could really feel the energy and tension between them. It was sooo good. :) And I'm rather a sucker for the 'forbidden' love angle, even though it was a foregone conclusion.

I giggled so hard over Sean hiding out from Natalie and her clipboard. And then, when he finally read her "billion point plan" and had his epiphany, I giggled some more. Why are some men so dead-set on believing women don't know what we're talking about?!?

The mystery of who was sabotaging things at the brewery had me grasping at straws. I honestly had pointed my finger at someone else. So I truly was shocked at the reveal. Were you?

Speaking of the brewery, I was glad more time was spent in the brewery in this installment. We still didn't get a lot of time with the staff but listening as Sean waxed poetic about his stout recipe made sigh. And wish someone would actually brew it. (Hmm, may have to get James on that one ;)

I.LOVE.RUBY.SUE!! That woman! I could hug her! I loved Sean's description of her as "a deadly combination of brass-knuckle tough love served with a side of cookies." That's exactly what he got from her, exactly when he needed it.

Could you believe Sean's dad? That guy was a piece of work. What a jerk!

We didn't really see Olivia in this book so I'm curious as to what the next installment will be like. I assumed it would be her book...

So I really enjoyed Hollywood on Tap. It left me feeling like I'd had some of Ruby Sue's famous pecan pie and iced sweet tea. Satisfied. I still can't say why this one was more enjoyable though. I want to know what you think...


I agree, I felt like I got to know both Sean and Natalie so much better! Even if it was just glimpses into their pasts, that was necessary. Like, why Natalie had those pearls, and when she started to use them. And also why she felt like she needed to control was important to understand. Organizing things around her helped her feel more in control, and it showed us a lot about who Natalie was as a character, I think. That is one of the biggest differences between Sean and Natalie's story as opposed to Miranda and Logan in my opinion. Because we got to know them better, I also felt more attached to them.

Oh my goodness, I agree! They were very hot together, their chemistry was off the charts, and I almost felt like cheering for them! And the 'forbidden' angle really worked for me, too! All the reasons why they shouldn't became reasons why they had to ;)

LOL, Sean thinking Natalie didn't even realize he was hiding from her was hilarious, and when she was waiting for him, blue-lipped, in the cold-room I was laughing out loud. I'm not so sure Sean was hiding from her clipboard because she's a woman. I think it was just as much because he wanted to think he had everything under control on his own.

I was totally shocked at the reveal about who was sabotaging the brewery, I was so sure I knew, too, and when the show-down happened I had no idea!

We did spend more time in the actual brewery in Hollywood on Tap, and we even learned the names of some of the people working there - big improvement! And I loved that Sean shared so much about that stout he wants to brew - I want one like that, too! If you can get James to make one, I'll be happy to come for a tasting ;)

Ruby Sue should have her own installment! She's such a hoot! Knowing everyone, but rooting for our Sweets, I already enjoyed her in Enemies on Tap, and she was another character who was even more present in Hollywood on Tap.

Sean's dad truly got what was coming to him! What an arse! I have never understood people who push their children to fulfill their dreams, rather than the child's own dream. And the way he talked to Natalie was so bad. But she showed her backbone anyway, as soon as she got a little help seeing that Sean might be better than she thought after talking to his dad, that is.

I think we maybe felt like we knew everybody better in this story because we had met them already, and the back-stories were definitely more fleshed out! I loved the fun interactions between Sean and Natalie, and also Natalie's inner musings which showed what made her tick.

I forgot to say anything about Olivia!! I think the next book will be hers, and I'm impatient to finally meet her. I was a little bit disappointed she only appeared in phone conversations once more in this one. However, it seems like the three sisters are really close, and I look forward to meeting her in 'person'.


You're absolutely right, Lexxie. Getting the background information on both Natalie and Sean did help me invest more in their characters. That was a complaint I had about Miranda and Logan - that I wished we'd gotten more about them so I could have been better acquainted with them. I really did feel like I got that with Natalie and Sean. And yes, it also helped that we'd met them previously but I really liked getting the explanations about certain things about them - and I liked that those explanations were given to each other rather than just in their heads. They each gave up some control to let the other in when they gave those explanations.

I got some looks from my family when I was laughing over Natalie being in that freezer. That was hilarious! She was one determined woman!

You're also right about Sean needing control and that was why he was avoiding Natalie's plan. Now that you mention it, I think it's ironic that they both need control in and of their lives but they go about it differently. And that was one more way in which they go together despite being so seemingly different. Sweet and sour indeed.

Ruby Sue should totally get her own installment. But I bet we have to be happy with the role she plays in the lives of the Sweets. I love that she sides with them and will stand up to anyone who tries to run them down.

Yeah, I was disappointed that Olivia didn't come to Salvation like I was expecting. But the sisters do seem very close and I'm really excited to meet Olivia in person as well. :)

It's really too bad we weren't able to be as invested in Miranda and Logan, because they both had a lot of potential, too. I agree about getting to know more about Natalie and Sean, we did learn about their little quirks, and were able to understand them much better! Learning what Sean had gone through as a child-star in Hollywood made my heart bleed for him! And it was not difficult at all to see why he would not share any of that with Natalie or anyone else. When it comes to fame, some people are such vultures!

LOL we both get looks from our families while reading, it seems :D It would be fun if we could ALL meet up one day, you and I could hide somewhere and read (we'd quickly be found because of our giggles, though) and the men and the kids could go hiking or biking ;)

Oh, I hadn't even seen the irony in the way both Sean and Natalie needed control, because they hadn't had any at all when they were younger! Very good point, my dear :)

Yeah, I don't think we'll get an installment with Ruby Sue, but it would be glorious! I hope she'll show up even more in Olivia's book. I think Trouble on Tap will be released in July... a summer buddy- read, maybe?

My Final Thoughts
Overall, Hollywood on Tap was a much more satisfying read than it's predecessor. I felt I knew and understood Natalie and Sean better and therefore was really invested in them. Their chemistry was electric! And the suspense created by the saboteur added that little extra to the story.