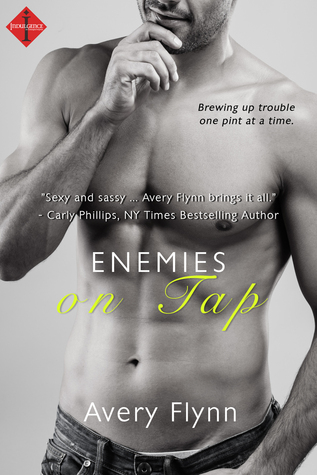 Synopsis
Brewing up trouble one pint at a time.

Enemies...After years away, Miranda Sweet returns to Salvation, Virginia to save her family's brewery, but her fate is in the hands of her lover-turned-enemy, Logan. What's a girl to do when the only person who can help her is the man who betrayed her?

Lovers...Logan Martin can't believe his luck when the woman who smashed his heart to smithereens walks into his bank asking for his help. What she doesn't know is that he needs the land her brewery is on--and he'll do whatever it takes to get it.

An Irresistible Combination...Their wager becomes a battle between their attraction and their determination to win. But it's in each other's arms that they realize there might be more at stake now than their bet. With the town against the Sweet Salvation Brewery's success, Logan has to choose between what's expected of him and what he really wants...

Lexxie (@Unconventional Bookviews) had so much fun doing a buddy read and chat, we decided to do it again. I hope y'all enjoy our chat as much as we did!  ;)

I like that Miranda is confident enough in her skills that she'd shoot to revamp her family's brewery in a bid for a promotion.

I fell hook, line, and sinker for Logan - the Prince of Salvation who didn't want anything to do with that title. I like his persuasiveness (I'm thinking of the pie bet) and I feel for him living a role picked for him.

Natalie is an interesting character. We don't get to see enough of her for her to have much dynamic but I want to know more. I want to see how growing up in Salvation, and having 2 sisters that are mirror images of you, affected her personality.

I wish we could see more of Ruby Sue. I like a little old lady with spunk and she has it in spades. She doesn't shy away from telling anyone like it is. And I'd like to have some of her famous sweet ice tea and pecan pie! (Have you ever had sweet ice tea or pecan pie??)

I think Flynn did an excellent job of conveying the benefits and big drawbacks of growing up in a small town. I think the negatives were more obvious in this story because this is a Southern small town.

I wish we could have a little more backstory on Miranda and Logan - how they came to be together way back when...before everything went to hell. I think that would have made it more clear the hurt between them.

I also would have liked a little more closure - how is Miranda getting out of her deal with her company? what about Logan's dad and his job? There were some things left 'untied' at the end. Although these things may be addressed in the next book...

I also wish we'd seen a bit more of the events that apparently happened off page between Miranda and Logan. I know they had history but since that wasn't well defined, things seem to happen rather quickly. I hope we'll see more of them in the other books.

I really enjoyed the brew talk. Since hubs has brewed beer and we've done a few ;) brewery tours, I could really envision the brewery, all the equipment, the smells of the mash and hops...Flynn clearly has some experience with beer. ;)

So what did you think?

I agree that Miranda was a pretty kick-ass character on the surface, but I felt like I didn't really get to know her all that well. Between feeling bad because of how the small town had always treated her family, and the way she also felt about her family plus trying to get Sweet Salvation Brewery to become a profitable business, there wasn't a lot of place for character development.

Logan was great, but I also didn't feel like I got to know him very well. I agree with what you said towards the end of your mail, that it would have been nice to have a little more back story for both of them.

I am pretty sure we'll get to know Natalie better in the next book, and I hope we'll actually get to meet Olivia then, too!

Ruby Sue was great, she didn't care what other people thought of her, she stood by the people she enjoyed, and that's it! Of course, she also had her famous pecan pie ;)

Apart from getting more closure - which would have been really great! - I would also have liked to have a little more brewing in the pages of the story. There was very little that really had to do with brewing beer... more about how to turn a business around, and problems with staff. But all of the staff kind of disappeared off the pages after Miranda fired Carl. only Sean was still present and a part of the story. That made the story feel like it was touching on the surface much more than going in depth as it could have, without adding too many pages to it overall.

And I could have done without all the passive-agressiveness of Miranda's boss at the financial company. We never met him either, but he almost had a bigger part in the story than some characters that I thought were more important than him...

I hope some of these things will be taken care of in the second book, because even if I gave three stars, I did enjoy it enough to continue reading about the Sweet girls and Salvation :) I wanna learn how to brew my own beer!

I didn't even think about the fact we never met Miranda's boss. A lot of time was spent on him and I did *not* like him one bit. But that's part of the reason I wanted closure about Miranda's job. Flynn didn't explain how that was going to be taken care of and it was a pretty big 'loose end'.

I, too, would have liked more time spent on the brewing of beer. You're absolutely right...Flynn did spend more time on the business aspect of it. And you're right about her staff disappearing from the story with the exception of Carl and Sean.

We have a common theme going here, don't we? We both want MORE! I gave this 3 stars as well because Flynn did pull me into the story and I do care about the characters. But if MORE was there, Enemies on Tap could have been a richer read. I really do want to read Natalie's story to see if we get the MORE we're looking for.

Yeah, taking care of Miranda's job, and her boss, and make sure both are left behind for good without any trouble coming to show up in the future would have been really nice.
Having most of the staff on the outlines of the story could have worked, but they just plain disappeared, and that made me feel like the story was still a little rough… I'm sure you know what I mean.
Wanting more is a good thing, I guess, and I do look forward to reading Hollywood on Tap. I'm very curious about Sean and his past – hopefully we'll get more backstory ;)


My Final Thoughts
Overall, I enjoyed Enemies on Tap and will continue the series. Flynn got me interested and invested enough to want more of Salvation and the Sweet sisters!
Posted by Bookworm Brandee at 1:00 AM