Hey y'all! I'm thrilled to be a part of the blitz for Peggy Martinez' Contingency and Relativity! This series has definitely piqued my interest. It's New Adult AND Time-Travel! Sounds awesome, right? I have all the pertinent information about the books, an excerpt from each book, and TWO giveaways!

For the tour-wide giveaway, obey the rafflecopter below. There are some fabulous prizes up for grabs.

I also am able to offer one lucky commenter ONE ecopy of Brevity, which is #2.2 in the series. To enter, simply leave a comment about the post. This giveaway is open internationally and ends September 25. The winner will be chosen randomly. 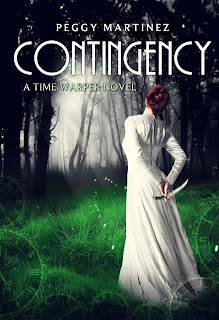 Synopsis:
Eighteen-year-old Sage Hannigan wants to get back to her own time, preferably one that hasn’t been destroyed by an underworld plot brewing in Edwardian-era South Carolina. How hard can it be?

All she has to do is:

1. Learn to use newly acquired warping skills to bend time to her will.
2. Take out a few rogue vampires.
3. Join an ancient secret society.
4. Figure out who is putting the time stream in jeopardy.
5. Find and maim whoever invented the corset.

Sage never asked to be chosen by the Druid Priestess, Amerach, to become a Warper. She also never asked to have the future hanging on her shoulders or to warp a hundred years into the past. She certainly never asked to meet Dr. Aldwin Blake, who would make her question her desire to get back to her own time. But if she fails her mission, people will die, history will change, and the present she wishes to return to will be no more. 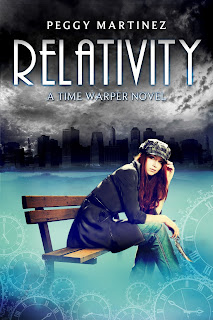 Synopsis:
Three months after Sage Hannigan time warps a hundred years into the past and saves the future as we know it, she is still trying to come to grips with all the has gained…and all that she has lost. All of her searching hasn’t turned up Cerberus Society or any creatures of the night and she’s beginning to wonder if she’s gone crazy after all. The only things keeping her grounded are her sparring sessions with Matt and her weekly ritual of scouring the city for low lives to kick the crap out of, and even that can’t keep her dreams free of the heartache and bitter sweet memories she has come to loath and…to cherish. When blasts from the past; good, bad, and evil, come knocking on her door, will she be able to do what she has to even if it means having her barely-healing heart ripped to shreds?

By the time I struggled out of the corset by myself—which took entirely too long, and I’m not certain, but the whole process may have involved some foul language—washed my face in a water basin, and finally laid down on my bed, I was unable to quiet the tornado of emotions and thoughts swirling around in my head. I still wanted to cling to the hope that if I went to sleep that night, I’d wake up safe and sound back in my apartment in 2004 and I’d laugh my butt off at the ridiculously elaborate dream I’d had. But, as much as I craved that, I was coming to the conclusion that my reality was much, much more complicated. Not only did I find out I had time traveled to a different time and that vampires were real, but I’d also found out I’d been chosen to wield powers and help fight the forces of evil. I was so in over my head. I just hoped I could live up to all the expectations and do whatever I had to do to get back to my time.  Cotingency, Peggy Martinez

“I’ve lain awake in bed the last hundred years remembering, Sage.” He pushed himself further into my space, putting both his hands on either side of me, onto the counter behind me. I had to lean back as he leaned in. “Remembering your scent,” he said softly as he buried his nose into my hair and inhaled. My eyes fluttered closed, and I tried to hold my body rigid, but my arms were already shaking from the force of it, from the need to lean into him instead of away from him. “Remembering the curve of your neck,” he murmured as his lips grazed my jawline and his hand cupped the back of my neck, sending tingles all along my skin and drawing a moan from me. “Remembering the taste of your lips,” he spoke huskily against my mouth.

His mouth devoured mine and the only thing I could do was wrap my arms around his neck and hold on as he made up for a hundred years of doubts, desires, and distant dreams. His mouth slanted against mine, and my body trembled against his as desire and longing clouded my thoughts.  Relativity, Peggy Martinez

Peggy Martinez is a homeschooling mom of one boy and four girls.
She has been married to her soul mate, Omar, since January 2000. She enjoys reading, writing, soap making, all things aromatherapy, and Twizzlers- lots of Twizzlers. She dreams of one day owning a small homestead, raising some chickens along with her children, growing a large garden, and eventually taking a dream vacation to Greece. It isn't too far fetched to think you could happen upon her and her husband having a conversation about religion, political conspiracies, a zombie apocalypse, or gangster movies.