Welcome to my stop on the blog tour for Kelly Walker's No One's Angel. My stop includes all the details for the book, my review, and a giveaway.

If you want to check out the other blogs on the tour, click here. Also, during the tour, No One's Angel is only 99 cents. 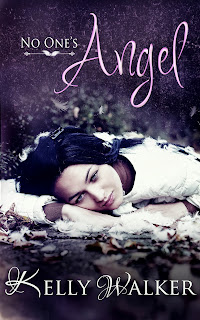 Synopsis:
Tess used to spend more hours than she’d care to admit playing her favorite computer game, using the nickname Angel. She could pretend her life was different, and she could pretend Arion was just a friend. But a girl needs more to keep her warm at night than pixels and she traded her virtual heaven for a real life hell. Now she’s on the run from a past she won’t talk about, and the only place she has to go is the doorstep of the friend she’s never actually met.

When Angel disappeared from their nightly games, it nearly destroyed Arion. He threw himself into work and women, but he can’t help knowing the one night stands will never compare to the angel who haunts his dreams. At first, when she shows up soaking wet and scared-shitless on his doorstep, he thinks his prayers have been answered.

But the more Arion tries to keep Angel close, the more her fear drives her away. If they are ever going to have a chance for a future, they’ll first have to deal with the past that hasn’t forgotten her any more than she’s forgotten it, and Arion will have to learn how to let her go.

No One's Angel is a New Adult(NA) Contemporary Romance and is recommended for mature audiences only due to language and sexual content.

No One's Angel took a familiar NA theme and put a little different spin on it. Ms. Walker's writing captivated me and I was immediately sucked into Angel and Arion's story.

Angel is a young woman on the run. I admired her for her gumption in escaping her situation. She has quite a spark and despite the things in her life trying to smother her light, it shines through nonetheless.

Arion is a young man just putting his life back together. He has his heart broken and headed in a downward spiral. Now he's running his bar and going to college. But he doesn't let any woman, aside his step-sister, anywhere near his heart.

Angel and Arion met online gaming. I admit to knowing next to nothing of the gaming world but that was okay. Ms. Walker explained all the necessary elements throughout the book. Angel and Arion (which are their screen names - they are actually Tess and Axel) became close - talking, flirting - over the years they were on the same team. Angel left the game abruptly, with no explanation, which tore Arion apart. But it's Arion she runs to when she needs a refuge.

These two clearly have feelings for one another and I only wished they'd been honest from the get-go. I understand they each had baggage - especially Angel - that made it hard to trust. But the internal, and sometimes external, waffling on their feelings and whether they should follow them, irritated me.

I loved the last portion of the book. Once the air was cleared between Angel and Arion - once revelations occurred and epiphanies had - Angel and Arion really shone. Their strength of character and depth of feelings conveyed, and I could help smiling.

No One's Angel started out strong, dragged a bit with the lack of honesty and openness between Angel and Arion in the middle and ended on a sweet note. I appreciated Ms. Walker's message of hope to any young woman who might find herself in Angel's predicament. And I enjoyed learning the different aspects of gaming. I especially liked seeing the strong spirited Angel and Arion after fighting through their challenges and coming out the other side stronger. 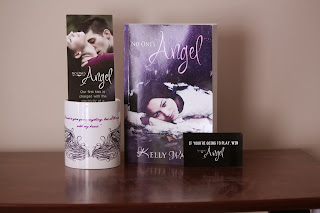 Kelly Walker was born in Trappe, MD but she now calls Fredericksburg Virginia home. She has an unhealthy appreciation for chocolate, and a soft spot for rescued animals. Her best lessons on writing came from a lifetime of reading. She loves the fantastical, and the magical, and believes a captivating romance can be the most realistic magic of all. Kelly, her husband and her two children share their home with three dogs who walk her, and two cats who permit her to occasionally share their couch.

Posted by Bookworm Brandee at 5:46 AM