I'm pleased to be a part of the cover reveal for the third book in Cambria Hebert's Take It Off series, Tempt. And I gotta say, I am in love with this cover! I think it might be my favorite one yet in this series. What do y'all think?

This cover reveal is presented by Xpresso Book Tours. 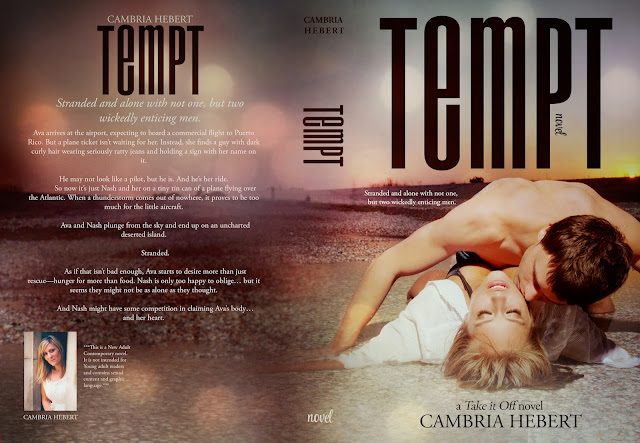 Tempt by Cambria Hebert
Take It Off series #3
Cover Designer: Mae I Design


Note: the Take It Off series is a series of stand alones. Each book is its own story.
Genre: New adult contemporary - due to graphic language and sexual content this book is recommended for readers 18+ 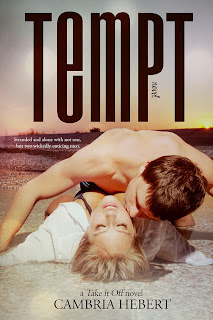 Stranded and alone with not one, but two wickedly enticing men.

Ava arrives at the airport, expecting to board a commercial flight to Puerto Rico. But a plane ticket isn’t waiting for her. Instead, she finds a guy with dark curly hair wearing seriously ratty jeans and holding a sign with her name on it.

He may not look like a pilot, but he is. And he’s her ride.

So now it’s just Nash and her on a tiny tin can of a plane flying over the Atlantic. When a thunderstorm comes out of nowhere, it proves to be too much for the little aircraft.

Ava and Nash plunge from the sky and end up on an uncharted deserted island.

As if that isn’t bad enough, Ava starts to desire more than just rescue—hunger for more than food. Nash is only too happy to oblige… but it seems they might not be as alone as they thought.

And Nash might have some competition in claiming Ava’s body… and her heart.

Cambria Hebert is the author of the young adult paranormal Heven and Hell series, the new adult Death Escorts series, and the new adult Take it Off series. She loves a caramel latte, hates math and is afraid of chickens (yes, chickens). She went to college for a bachelor’s degree, couldn’t pick a major, and ended up with a degree in cosmetology. So rest assured her characters will always have good hair. She currently lives in North Carolina with her husband and children (both human and furry) where she is plotting her next book. You can find out more about Cambria and her work by visiting http://www.cambriahebert.com