I'm excited to be a part of the cover reveal for Jordan K. Rose's The Demon Mistress. This is the first Eva Prim novel and I rather like this cover. I think the moonlight reflecting off the couple is done well. And I like the demons(?) in the mist in the bottom corners. I also like the premise. I think Eva's gonna make me giggle. What do y'all think? 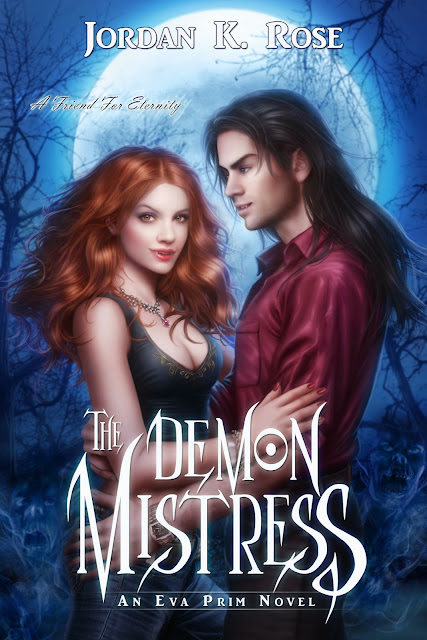 What’s a girl to do when she discovers her husband, who happens to be the Master Vampire for the New England Region, has been lying to her for, oh, say a hundred and eighty years?

Well, it all depends. If she’s accidentally released forty demons from some creepy old book, unintentionally announced the existence of vampires on The Internet, kidnapped a werewolf, enraged a lovesick vampire by stealing his approved mate, and attracted the attention of The High Commander for The Vampire Federation, not to mention gotten stoned and mastered the forbidden art of demon calling, she might be willing to call it even.

Or, she might plead her case at an Inquisition and hope like all hell, she isn’t staked before sunrise. Eh, a slightly busier night than usual, but nothing Eva Prim can’t handle.

Jordan loves vampires. But if you know anything about Jordan, you already knew that detail. What you didn’t know was it wasn’t long ago that she began writing about them.

A few years back Jordan received a copy of Twilight from her husband as part of her anniversary gift. By the end of that week she’d read the entire series and moved onto Anne Rice’s Vampire Chronicles. Eight weeks and eighteen vampire books later the idea for her first book, Perpetual Light came to her followed very quickly by Eva Prim.

In October of 2013, The Demon Mistress, the first Eva Prim Novel is available along with four short stories. For continual updates on Eva please join the Snack Of The Week Club at www.evaprim.com.

Jordan is a member of the national Romance Writers of America organization and several chapters.

When she’s not writing about one vampire or another Jordan enjoys spending time with her husband, Ken and their lovable Labrador, Dino on the beautiful beaches of New England.